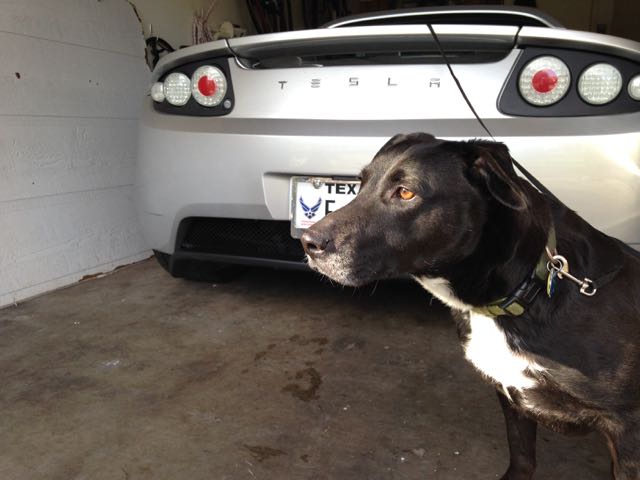 Unfortunately, a few years ago George got hit by a car, broke his back and lost control of his rear legs. Fortunately, Chris saved his life, helped him recover from this horrific accident and the two have been best buds ever since.

George made sure that I didn’t mess with his beloved Tesla Roadster too much and so he kept a watchful eye on me.

The Roadster marks the beginning of Tesla. Who knows where the company will ultimately end up–probably an army of robots that will kill us all–but at least for now, this Roadster is where it all started. This is the car that almost brought down Elon Musk and his vision since it barely made it out of the factory.

The Roadster looks much like a Lotus Elise which is to be expected, since there was quite a bit of collaboration between Tesla and Lotus. And by collaboration I mean Elon Musk holding a gun to the Lotus CEO’s head (whoever he was at the time), yelling: “Give me a Lotus so I can put a battery in it!”

Of course, we know that the Roadster is much more than an Elise with a battery. The Roadster has larger brakes.

I remember when the car first came out. My first reactions were: was this the new Lotus? It’s a battery operated Elise? Is this the latest incarnation of the Prius? Man, Toyota is really doing some cool stuff these days.

If the god awful GM EV1 was any indication, we knew that electric vehicles had a zero chance of survival. All of these insanely horrible battery-powered vehicles made us loathe the idea of battery-powered cars. And then the Tesla Roadster came along which was so fast and good looking.

This specific Roadster was purchased certified pre-owned by Chris that came with a warranty. There are so few of these around that Chris looked for a while before he found one he wanted to own. These roadsters, even used, are expensive. Chris’ Tesla has been running pretty strong during his time of ownership and has had no problems even after 8 years of existence which is not bad at all for the first Tesla creation.

Much like the Lotus Elise, the Roadster is very compact and low to the ground. As a result, the primary challenge is getting in and out of the car.

You Must Have Excellent Athletic Abilities

Entering and exiting the car doesn’t just require you to be small, but also demands of you exceptional Olympic-level athletic abilities. It helps if you’re one of the three people ever to have won American Ninja Warrior, among the thousands who have competed over the years and have had to go home in tears after losing their grip on that final door knob challenge. If you can hang onto a door knob with one finger thirty feet off the ground, then you have the skills needed to own a Roadster.

Doing some form of yoga or pilates before you get into the car is a good idea, because you’ll need to warm up those cold muscles to make sure you don’t pull a muscle or two. It also helps to have a strong core which I clearly didn’t, since my struggle is evident in the video.

Although you don’t get an Olympic medal for mastering getting in and out of the Tesla Roaster–when you clearly should–you sleep better at night knowing that you’re part of 0.0001% of people that can successfully do this. You can pat yourself on the back and reward yourself with a juicy cheeseburger for completing this remarkable feat.

Having been in a Tesla Model X recently, I guess part of me was expecting more in the way of some cool electronic wizardry. I’ve been spoilt. But, sadly, there wasn’t much.

I can understand that physically threatening the Lotus CEO could’ve only taken Elon so far. Of course, I’m joking about the threats. I’m sure Elon didn’t threaten him; he just promised a year’s worth of free SpaceX rides to Mars in exchange for some Lotus help.

The main theme of the interior is that everything is quite simple, yet functional and things, in general, are miniature-sized. The main display and information screen is tucked away at the lower left side of the steering wheel which is so small that you have to hunch down in a car where you’re already hunched down and then you have to use your slender fingers to manipulate the touchscreen.

I was surprised that I had to manually adjust the mirror. I fully expected everything in the Tesla to be automated and electronic and so manually operating the mirror felt odd. After all, in a car that was supposed to represent the future of automotive technology, shouldn’t I be pushing a button to adjust the mirror? It’s like asking me to write a paper by hand when I’m sitting in front of a laptop.

There Is Actually Some Noise

As you can imagine, the Roadster doesn’t have a huge amount of insulation, so you do hear something which I enjoyed. Unlike the extreme quietness and refinement you expect in a Model S or an X, the Roadster provides a more visceral experience. It sounds like an airplane taking off as you accelerate, which you will come across in the video.

The ride was better than I was expecting. But, these days, my view is skewed because just about any car I’m in seems to have a significantly smoother ride than what I experience with my Flintstone-EraIS-F ride quality on a daily basis.

You must get rid of any notion of personal space while you’re in the car because both the driver and passenger are guaranteed to be touching each other. So make sure you don’t get into the car with anyone you despise. Also, brush your teeth beforehand because there’s no hiding bad breath in the small interior space of the Roadster.

Removing The Hardtop Is Hard

It’s not a one person job and if it’s just you doing it, you need to have a plan. Once you remove it, there’s no place to put it inside the car, so you’ll have to leave the hardtop wherever you took it off. And this is the reason, Chris built a unique homemade contraption to take the roof off and leave it hanging in his garage which he demonstrates in the video.

There is a soft top that comes with the Roadster in case you get caught in the rain, but it’s almost easier to keep the soft or the hardtop on. It’s too much work otherwise.

The beginnings of Tesla weren’t perfect, but I’m glad Elon Musk brute-forced his way through it all. I’m excited to see what the future Tesla of holds–electric planes, trains, robots, shoes–whatever it happens to be.