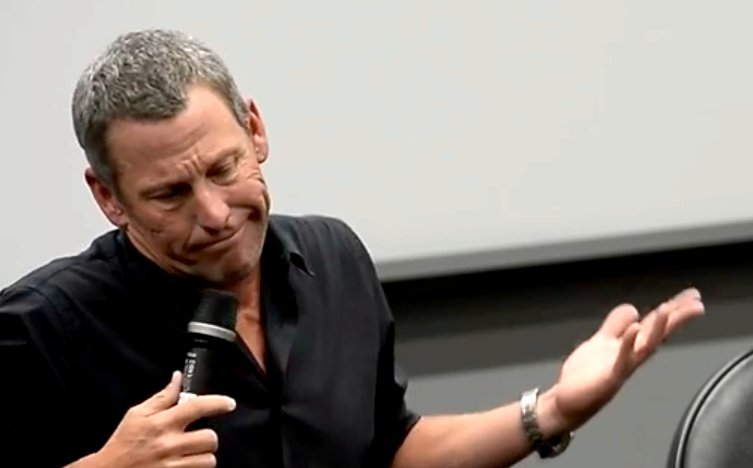 WHERE ARE THEY NOW? The Lance Armstrong team that dominated the Tour de France

Disgraced sports icon Lance Armstrong has blasted the US Anti-Doping Agency, calling it “one of the most ineffective and inefficient organizations in the world” and claiming its CEO, Travis Tygart, went after him only because he and USADA needed a case and a story.

Armstrong was talking to students in a wide-ranging discussion at the University of Colorado Boulder on Tuesday, Daily Camera reported. The fallen cycling star had been invited to speak in a class taught by Professor Roger Pielke Jr. called Introduction to Sports Governance.

Pielke told Business Insider by phone on Tuesday that in his class, which has about 90 students, everyone is involved in discussions about “the thorny, difficult issues in sports, like doping and FIFA and NCAA.”

Tygart was the guest speaker the week before Armstrong.

“We wanted the students to hear from USADA and one of the most famous athletes in the world who got caught doping,” Pielke said.

When addressing the class, Armstrong spoke at length about the supposed failures of the antidoping agency that took him down.

“I have a lot of thoughts about USADA,” Armstrong said. “I think the organization is absolutely necessary.

“And now the world views him and them and the organization and all of their peers, and any other antidoping agency, as truly effective, when they’re really not.”

He went on to say, referring to USADA again: “If you have an organization that’s struggling for credibility — and believe me, I was the complete dumb-ass who made it totally easy for them to do this, right? So this is my fault. I did what I did. Our culture and our era did what we did, but I took it so much farther. And that’s really the lesson.”

A representative at USADA told Business Insider on Tuesday that it would not comment on Armstrong’s latest criticisms. Pielke said he gave credit to both Tygart and Armstrong for taking all his students’ questions, including some “hard” ones from students who “are not shy.” He said he hoped the students learned that when it comes to doping in sports “there are no simple, easy answers.”

Pielke added that during their recent visits both Tygart and Armstrong each expressed that they would like to appear together at some point in the future, if possible. The two men each knew the other would be appearing in the class on the separate dates listed in the course syllabus, Pielke said. Armstrong himself does not hold a college degree. Tufts University in Massachusetts, which had bestowed on Armstrong an honorary degree in 2006, rescinded that in 2012. He did attend Plano East High School, in Texas, where he struggled and saw life as “unfair,” according to “Cycle of Lies” author Juliet Macur. The school wouldn’t let him graduate because he had too many absences — days he took off to do triathlons and train for bike racing — so his mother made him switch schools, Macur writes, and enrolled him in a nontraditional private school, one that didn’t have a problem with his poor attendance, and it eventually graduated him.

“One of the things I guess I want the students to appreciate is this idea of what are called ‘wicked problems’ — they don’t have any solutions. We can do better or worse. And doping is certainly a ‘wicked problem,'” Pielke told Business Insider.

“They got to be up close and personal with really two of the protagonists in the biggest doping scandal in history,” he said. “For the students I think it was a pretty special experience.”

When asked if he would be putting anything on the course’s final exam about Armstrong or Tygart, Pielke told Business Insider that a good short-answer question would ask the students to articulate the difference of opinion between Tygart and Armstrong based on their visits.

Armstrong won the Tour de France a record seven times, from 1999 to 2005. But USADA, led by Tygart, stripped the brash Texan of all his titles in 2012.

USADA found the Armstrong-led US Postal Service team had run “the most sophisticated, professionalized and successful doping program that sport has ever seen.”

After years of denial, cover-ups, and ruthlessly attacking and intimidating his many critics, Armstrong finally confessed to doping during all his Tour victories on “The Oprah Winfrey Show” in 2013.

Many argue there is a lack of contrition in Armstrong, as raised in a BBC interview in 2015.

Armstrong is still fighting a $100 million whistleblower lawsuit brought by former friend and teammate Floyd Landis and later joined by the US government. Armstrong has said he likes his defense team’s chances in the case.

He still owns multimillion-dollar properties in Aspen, Colorado, and Austin, Texas. Last year in Aspen, Armstrong crashed his SUV into two parked cars, fled the scene, and tried to make his girlfriend take the blame.

Armstrong still claims he is a seven-time Tour champion. He did not return an email request from Business Insider for a comment or an interview.

Watch two videos from the class discussion with Armstrong below, via Daily Camera:

SEE ALSO:Inside the war over the Tour de France, and how it may change pro cycling forever