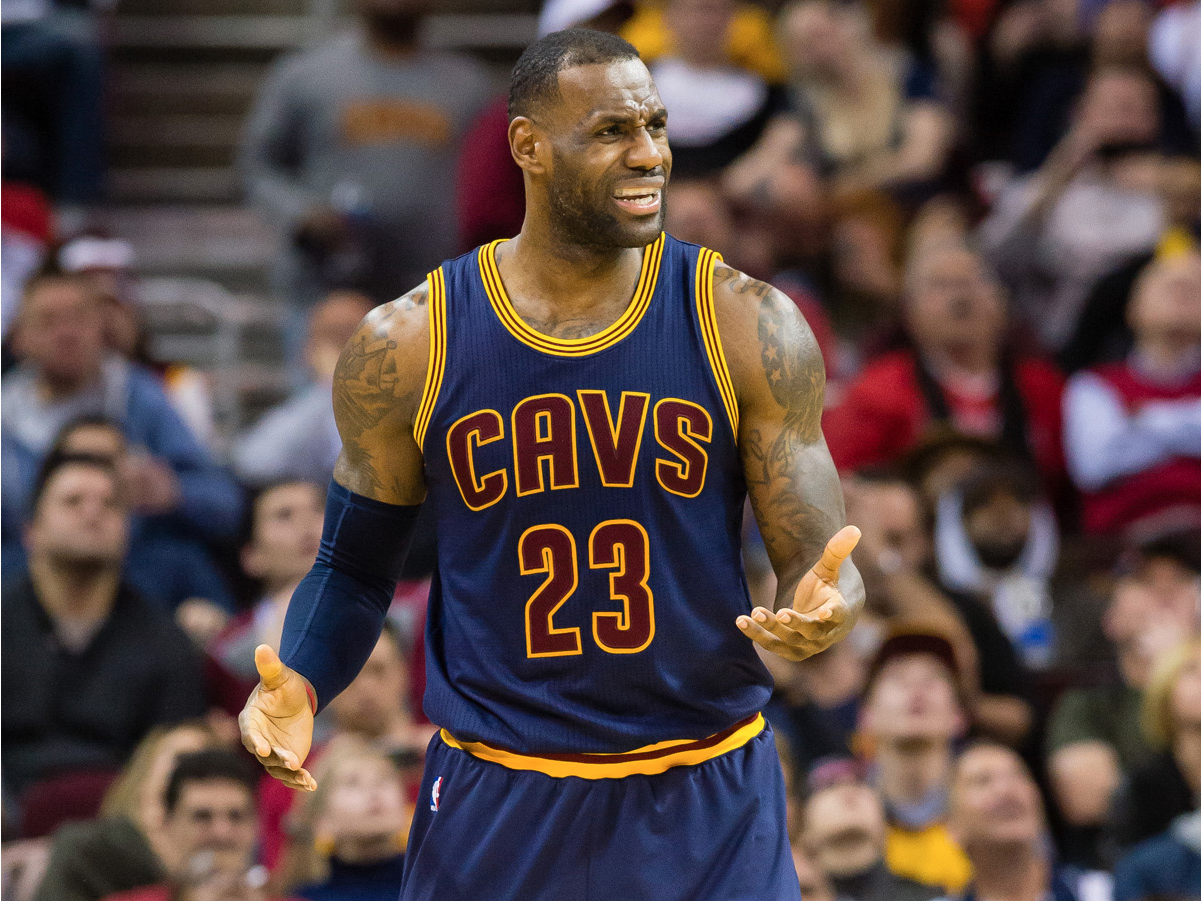 LeBron James is having an odd season.

Statistically, he’s still putting up monster numbers (though his efficiency has dipped), but there have been other unusual aspects.

The Cavaliers have largely underwhelmed, despite returning their near-championship squad; they fired David Blatt and haven’t seen much improvement under Tyronn Lue, and James just took a random two-day trip to Miami to hang out with Dwyane Wade (just don’t ask him about it).

However, even more odd lately has been LeBron’s social media behavior. In recent days, he’s had several cryptic tweets about forgiving mistakes, surrounding himself with people he loves, and the importance of structure, consistency, communication, and like-mindedness. Here’s a recent example:

Structure and Consistency creates Perfection. U shortcut, u come up short! Straight Up. #DVC#SFG

It’s this simple. U can’t accomplished the dream if everyone isn’t dreaming the same thing everyday. Nightmares follow. #TheDC#SFG

LeBron has insisted this isn’t directed at anyone, like his “fit out” tweet was to Kevin Love last season.

On Sunday, he also posted this Instagram in which he screams at the camera and brags about working out with the caption “Something is really wrong with me! And I love that it is. #StriveForGreatness #ImCrazyForIt”:

Something is really wrong with me! And I love that it is. #StriveForGreatness #ImCrazyForIt

As mentioned, when asked about some of his seemingly foreboding tweets and his trip to Miami, James was curt and ornery. However, on Monday, James spoke to media and discussed at length… several things.

If that’s a vague description, it’s because LeBron’s quotes are hard to summarize. He seemingly ranted about nothing other than competitive fire, structure, and, a recurring topic this season, his “beautiful mind.”

Via ESPN’s Dave McMenamin, here’s LeBron on his tweets:

“I don’t know if anything started it. Just my mind working. I got a beautiful mind and I want to use it sometimes in a social manner.”

“They’re for the educated mind. So if you have an educated mind, they hit home for you. [Sunday] night I tweeted that consistency and structure breeds perfection, and if you take a shortcut or if you don’t handle business, then you come up short. I think everybody should understand that. It’s nothing between the lines, it’s just life. You can’t shortcut being perfect or trying to be as perfect as you can, or trying to get to a point where you just feel like you can succeed. So, for educated minds, it should be fine.”

LeBron also seemed to welcome any conflict his tweets may be creating in the Cavs’ locker room — though it’s unclear if they are at all:

“If you don’t have conflict throughout the course of a season (your team is lacking), even internal or external- sometimes, it becomes external, which you don’t want to happen, but sometimes it happens and that’s OK. I think conflict, it builds character. It builds even more trust. You’re able to get on someone, someone’s able to get on you and then the whistle blows and, let’s get out and let’s execute what needs to be done. I’ve always been like that since I was a kid.

“I got four best friends that used to get on my ass about being soft at times and not playing the right way and not being aggressive. Any time I wasn’t aggressive when I was younger, they called me soft and I had to respond. I just come from a different style of basketball. I played outdoor basketball when I was a kid. If you didn’t win, you might not play again for the rest of the day. Like, you might not play for the whole day if you didn’t win. Conflict was just a part of basketball for me and for my friends growing up.”

He continued on backlash over his social media use (McMenamin clarified the Theodore Roosevelt reference):

“Some of it I listen to, I use it as motivation. It never gets to a point in my mind where it’s like, I should take it serious, because it doesn’t matter … If you’ve ever read Theodore Roosevelt, ‘the man in the arena’ [from his 1910 speech, “Citizenship in a Republic”], it basically just symbolizes if you’ve never been in the arena before, if you never had blood, sweat and tears before, felt the roar of the arena or been in the competition, then you can’t really understand.

LeBron did seem to get on track at one point, explaining how he’s tuned out some criticism and how he wants to be happy with his position in life:

“Twitter hasn’t been around that long, I’m kind of old. I don’t know. I think the other question is when I stopped caring about what other people think. I can remember that, it was my second year in Miami. I just stopped, it became too much where I was worried about what other people think instead of just making the main thing the main thing, and that’s just playing the game of basketball that I love and being happy about being in this situation. I’m a blessed kid from — you guys know the story — 40 miles south of here. I’ve got a beautiful family, beautiful teammates, and this game of basketball has brought me so much, so the outside noises just really don’t affect me.”

It’s not that LeBron’s words are nonsensical — it’s more of a question of why he’s talking this way. James has long been a media-friendly player willing to open about certain aspects of his life, but these rants are taking a strange turn. And it’s still hard to believe they’re not directed at anyone.

It’s also hard to buy LeBron is totally happy. For instance, the Warriors and Spurs, two seemingly drama-free, championship contender squads, don’t go off on tangents like this.

The Cavs are 7-3 in their last ten games, with a three-game lead for first place in the East. Perhaps a bit more winning and cushion could lighten LeBron’s mood, but for now, no matter what he says, it’s hard to believe everything is right with him and his team.