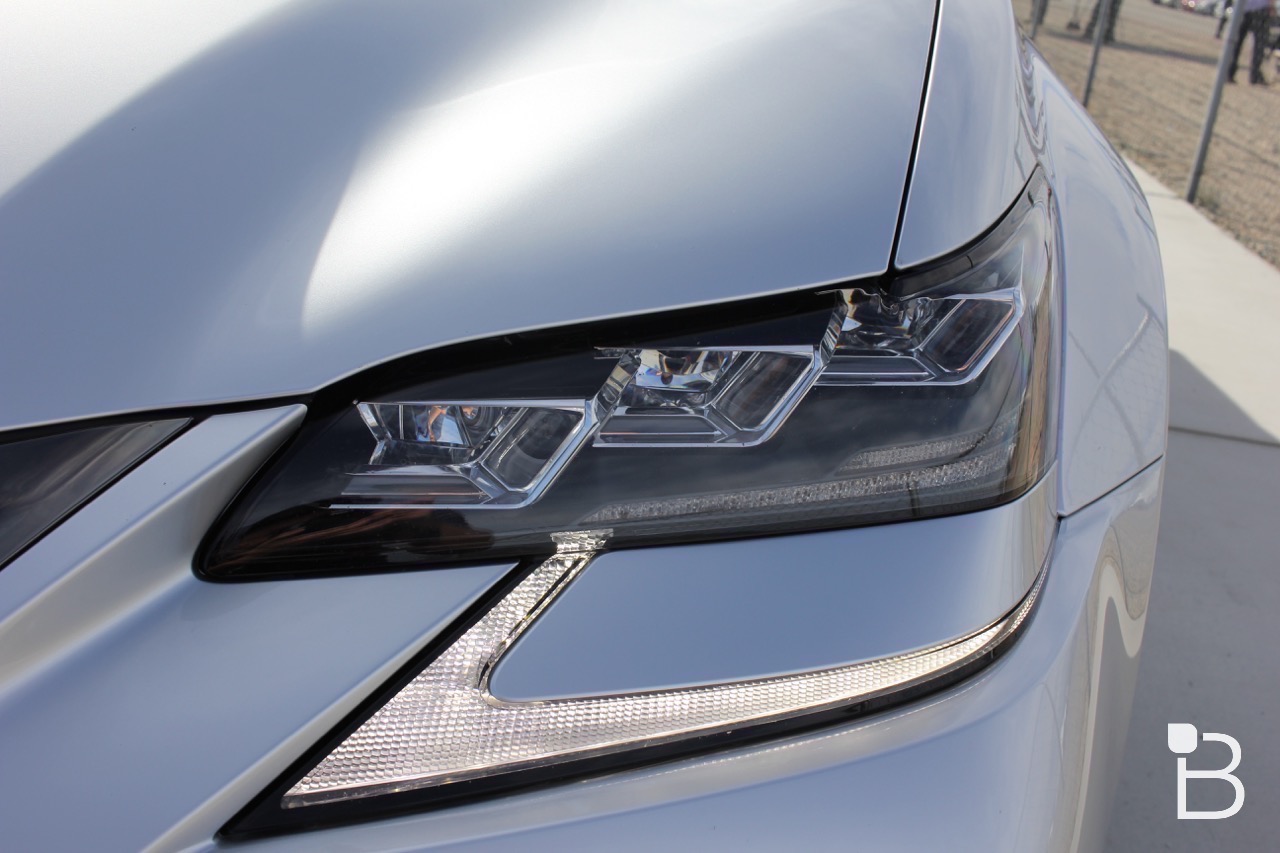 Lexus as a brand has been reinventing itself over the past few years to appeal to a more youthful driver. The RC F is a great example of a car that just screams out to the young and young at heart. Park the RC F in any parking lot and you will see teenage boys and middle aged men stop and gawk the beauty of the car. Start up the engine and gear heads can enjoy the fine, balanced sound of the roaring engine. It just sounds so good and warms your heart. OK, maybe not everyone, but if you appreciate the purr of a masterfully tuned engine, you know what I mean.

While the RC F jumpstarted much of the physical change for Lexus, we’ve seen the momentum flow through other vehicles, including the NX, RC and the list goes on and on. Finally the GS-family of cars gets its turn. In short, the GS F/GS F Sport is a more practical variation of the RC F/RC F Sport. Practical to my sense of what is practical at least. While, to some readers, practical can be considered an insult, I say it in a flattering tone. The GS F doesn’t drive any less fun or as aggressive as the two-door RC F. While the RC F is a fun, fast, beautiful car, it is limited with just two doors, and cramped rear leg room. GS F acts more like the sports car for everyman, everyday. I say everyday, because one drawback of the RC-family is that it is just a tad impractical if you are regularly trying to cram people into the back seat. It is possible, but with ANY two-door option, it’s just not ideal. The GS/GS F gives you that option.

If you’ve been following along with Lexus’ design changes over the last few years, the new looks of the GS F/GS F Sport will not be shocking. I do find it particularly interesting because Lexus is one of those brands that has very loyal buyers. However, it has shown that it isn’t afraid to design outside of its comfort zone.

Side note: Interesting fact, most of the lead designers that have been in charge of redesigning the Lexus brand were there from the beginning.

The GS F sports a wider display than the GS, sort of. The GS, which sports the same extra wide 12.3-inch display, splits down the middle and it keeps you from using the full width of the screen instead you are stuck with half a map and half display of some other feature. A minor change.

The interior is close to what we’ve seen in other Lexus F/F Sport offerings, with the sport seating, tighter suspsension and all the goodies that give the moniker deserving of the Fuji racetrack moniker. The GS F sports the special edition orange tone Brembo brakes, and surely has some great stopping power. Entirely necessary for its 467 HP engine.

The GS F comes standard with 19-inch wheels, carbon fiber rear spoiler, folding rearview mirrors, puddle lamps, and stunning triple-beam headlamps. One of the key differentiators of the GS F is the “F” logo strategically placed around, to let riders know just how much more special this car is versus the other Lexus’ on the road. It is entirely intentional and it reminds everyone that Lexus makes and sells performance vehicles. While the Germans have the M (BMW) and S (Audi) lines, Lexus wants drivers to know it has its own performance capable cars in the Fuji Racetrack inspired “F” Brand.

Lexus invited us to check out the GS F and GS F Sport on a beautiful track out at the Chuckwalla Valley Raceway, just outside of Palm Springs, California. Chuckwalla is a a fun 2.68 mile track where we had a chance to put the cars through their paces. It has plenty of curves, elevation changes and straightaways to get going at fast speeds. While we had professional drivers show us the ropes and take us around the track a few times, I was only able to hit about 130-ish mph on the straightest parts of the track. The pros had us going around 120 mph on the curves! For reference, top track speed is around 168 mph.

For its track capability, it still puts out decent EPA numbers, 16 mpg city, 24 mpg highway, for a combined 19 mpg rating. That might not seem a lot to a hybrid driver, but mind you this is car with a curb weight of 4,034 lbs and whole lot more fun to drive.

The thing is most drivers will rarely ever find an opportunity to be able to open up a car to those speeds. I know when I’m sitting in traffic, crawling through Southern California traffic, the furthest thing on my mind is being able to get a car in excess of a 100 mph. But a car of this nature is fun to drive regardless of driving conditions. It just has more to show when there is room to open it up.

Lexus has developed some really great transmission technology that we’ve seen in its other cars, but it is worth mentioning again. The transmission features a technology Lexus calls “Lexus G force Artificial Intelligence Shift control.” It makes the cars not just more efficient, but it also makes them fun to drive. Depending on conditions and the drive mode (Sport S), the car will select the appropriate gear to invoke a quicker upshift when the driver accelerates. It also forces the car into higher RPMs when you select the drive mode to Sport S+, which is a whole lot of fun on a track. If you’re not on the track, the RC F is more than capable running in Normal and ECO mode.

Lexus understands that the F brand is much more car for your average driver, so if you still want a better drive, without needing the track experience, you can splurge on the F-sport badged edition of its cars. You can drive the RC F Sport or GS F Sport, which look and feel like the RC F/GS F equivalents, at a much tamer price.

One of my favorite features in the F cars is the instrument panel. It displays a ton of great info, including lap timer, torque distribution, G-force, tire pressure, rear wing position, that’s in addition to all the things we’ve grown accustomed to in instrument clusters displays (e.g., temperature, MPG).

The all-new Lexus GS F drives really well, really well. It looks far more aggressive than your basic Lexus all while maintaining a level of practicality. The GS F drives deceptively well on a track and floats smoothly on a highway. It is comfortable for the passengers, while equally fun for the driver.

The Lexus GS F will be available at dealers across the country starting this month.