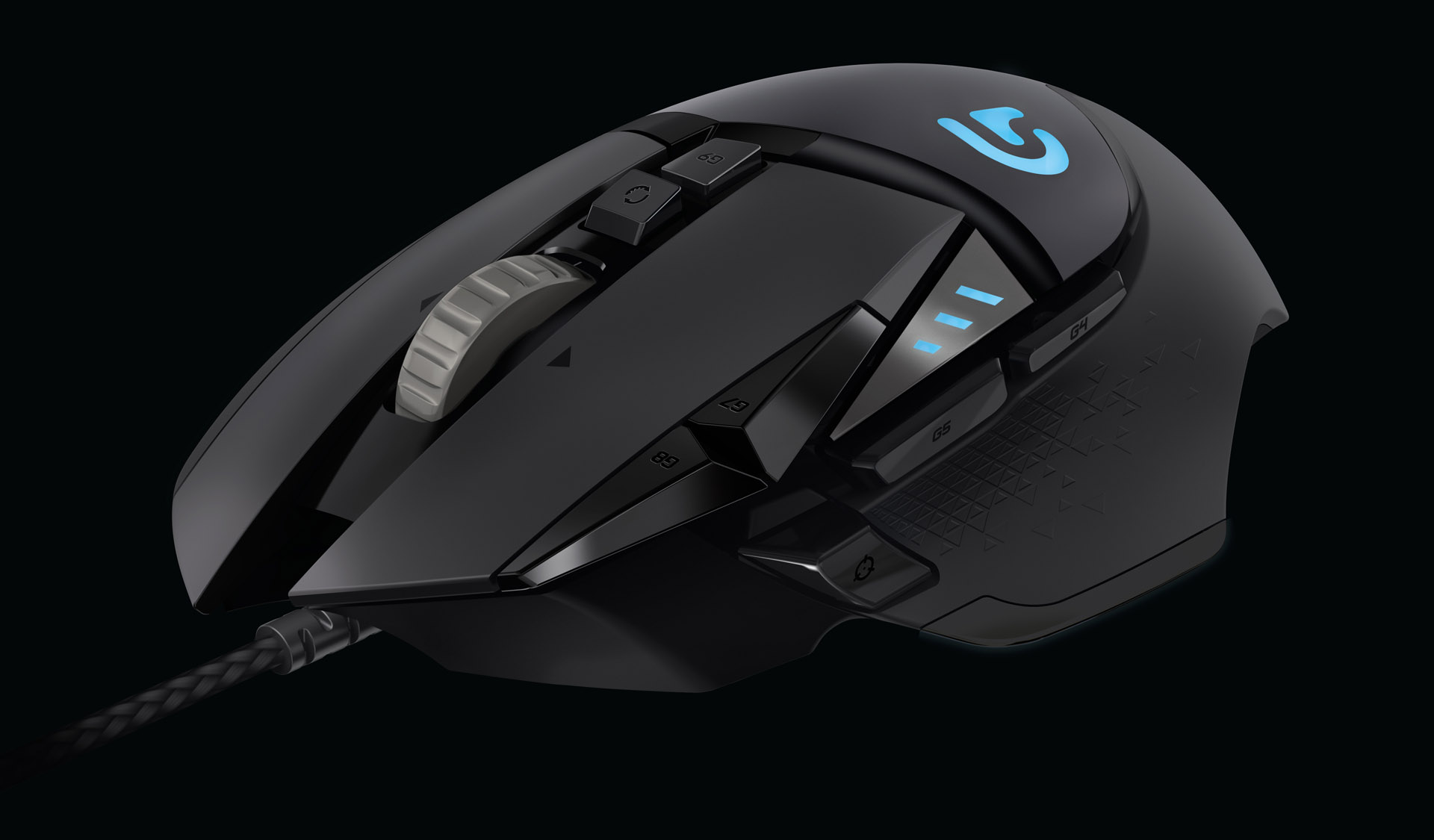 Logitech’ G502 Core mouse is really popular. It even has its own questionably named subreddit. It makes sense that Logitech would want to iterate and improve on it. That brings us to the G502 Proteus Spectrum. As the name suggests, this mouse is close to the G502, but with an emphasis on flexibility (that’s the proteus part). And also it lights up (that’s the spectrum part). The mouse offers a variety of ways to customize the way you use it meaning that, as long as you’re right-handed, you can make this mouse work for just about any application you can imagine. With that said, this is definitely a mouse for gamers.

The DPI range on the mouse starts down at 200 DPI and scales up to 12,000, and you can set five different DPI ranges in Logitech’s G software to fit all your needs. The button that hides under your thumb is, by default, intended to be a sniper button. When you’re holding it down, the DPI on the mouse shifts to whatever you’ve set it to so that you can aim with precision, and then let go and go back to 360 no-scoping noobs or whatever it is the kids are doing these days.

The button works very well, shifting between DPIs with no delay when shifting to or from. My only complaint is that this button is really easy to hit accidentally. It’s a very sensitive button, and clicks in with zero effort, so I accidentally hit it quite a few times, especially when switching between keyboarding and mousing. It wasn’t as big a problem when I was actively mousing, though. For the quick DPI toggle, this makes sense and works great, but every button on the mouse can be set to do whatever you like, so I’d recommend not setting this one to something too dramatic.

If you never change the DPI, both of the DPI toggles and the sniper button can be repurposed to fit your gaming needs. There aren’t enough buttons to make this a serious MMORPG mouse, but for gaming in general there’s almost endless uses. You can also set per-profile button configurations and but something like volume control, tab switching, or copy and paste on the mouse for use during daily work and have it swap to something else in-game.

Because this is a wired mouse, it’s pretty light by default. I came from a Logitech Performance MX as my daily driver, which has to not only pack all the mousing hardware inside, but wireless hardware and a pair of AA batteries as well.

Thankfully, the G502 comes with a set of weights, which I loaded up almost immediately. The bottom of the mouse has a magnetic door that you can easily pop of an insert anywhere from 1 to 5 weights to get the feel you need. The door pops open easily and closes easily as well, and feels firm and secure when you’re not making adjustments. The weights come in a little hexagonal case when not in use. If you can manage not to lose that, it’s easy to keep track of the weights and keep them secure.

One thing that didn’t change much in my switch from the Performance to the G502 is the mouse’s wheel. The wheel itself is quite different, with a heavy, metal feel and substantial notches, but the feature that carries over is one of my favorites in Logitech’s line of mice – infinite scrolling. The wheel has two modes, which you can toggle between with a mechanical button (meaning you can’t customize this particular button).

One mode has the mouse clicking firmly as you scroll, which will serve gamers well, and then there’s a smooth endless scrolling mode, which lets the wheel scroll for as long as you can make it spin. I use this constantly when working to get to the bottom of long documents and the like. This is a feature I’ve gotten very used to having at my disposal over the years and when it’s not present, I miss it.

In your hand, the G502 Proteus Spectrum will feel pretty much identical to the Proteus Core. The shape is very similar, and the texturing is as well. On the sides there’s a soft-touch rubber that gives it a good grippy feel, while the smooth material on top of the mouse helps keep the mouse comfortable during extended use.

One problem I ran into while tinkering with the mouse was that on my usual mousing surface, Razer’s Sphex mouse mat, The G502 would get stuck. It took me a while to notice it. During browsing and fast action, it moves smoothly. It wasn’t until I was playing SUPERHOT and moving the mouse in very small, precise ways that I notice it was sticking and making it harder to aim. I don’t have the same problem with other mice on the surface, but switching to a more standard mousepad also resolved the problem, so this isn’t going to affect most users.

Like Logitech’s other products, this one lights up and features RGB lighting that can be customized as well. It’s also pretty subtle lighting. The two spots that light up are the G logo, which will be under your palm during use, and the DPI indicator light. You can make these just about any color you can dream up, but they’re less about showing off and more about personal preference.

With that said, if you have the Spectrum mouse, keyboard and headset, it’s easy to get these all synced up in the software and pulsing with the same color.

Something else you can do in the software is tune the mouse to fit the surface you mouse on. This won’t be super useful to most users, as the mouse is sensitive and will work on just about any surface, but if you’re a gamer using a non-traditional mousing surface, what this will do is tune the sensor to track more appropriately to that surface so that the mouse goes where you expect it to. If you’re moving around frequently between your daily battlestation, a friend’s house, and other locations, you can also switch between different surface tuning profiles.

While still giving a little leeway for more specific mousing needs – MMO users, trackball enthusiasts, and other niches – you really couldn’t ask more from a mouse. The G502 does everything I could want, does it well, and looks good doing it. It’s a small evolution from the G502 Proteus Core, but it’s still an improvement to an already top of the line mouse. Whether you’re planning to get knee-deep in Logitech’s gaming line or you just need a new mouse, this is a great option.