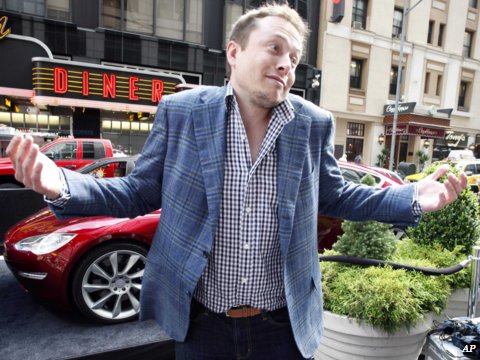 Tesla has created three vehicles in its short history — the Roadster, the Model S, and the Model X.

But it’s assumed that none will be more important than the mass-market Model 3, being revealed this month and scheduled to hit the streets in 2017.

Enthusiasm about just the Model 3 unveiling has helped deliver a 40% rally in Tesla shares over the past 30 days.

Tesla CEO Elon Musk has said that while the Model X SUV that hit the road late last year is a great vehicle, Tesla is building it primarily to fund the Model 3.

It has to succeed, right?

Well, no. It could be a catastrophe. But that wouldn’t necessarily spell the end for Tesla.

Nobody wants an electric car, even a cheap one The biggest risk to the Model 3 is just that there are already relatively cheap electric cars in the market, and no one is buying them in significant numbers.

The expectation is that a larger market for EVs will develop at some point in the future, and Tesla is angling to capture a big chunk of it. But if current consumer behavior persists, and gas prices stay fairly low, Tesla is gambling on a future that won’t arrive with the Model 3.

But to understand why a flop wouldn’t be a flop (except maybe to shareholders who are pricing in a hit), you’ve got to look at what Tesla means to Musk.

Tesla might look like the perfect blend of car company and tech company, but in fact the whole undertaking is part of Musk’s grand vision to accelerate society’s transition from fossil fuels to more sustainable options. One of his other companies, SpaceX, has the mandate of going to Mars so that we have a backup plan in the event everything goes to hell on planet earth.

Model 3 is a huge component of this vision, because a mass-market, long-range EV could begin the displacement of the internal-combustion engine after a century of dominance.

But if it doesn’t work out that way, Tesla is still generating impressive gross profit margins on the cars it currently sells, which are bought mainly by affluent consumers. We’re talking 18% in the most recent quarter.

So with the Model X, the Model S, and a revamped Roadster, which should arrive before 2020, Tesla could continue to dominate the market for luxury electric vehicles, cool it on the change-the-world thing, and simply be an exceptionally profitable niche carmaker.

Tesla Energy could be bigger than Tesla Motors Last year, Tesla created a spinoff energy-storage business for homes, businesses, and utilities, using its advanced battery technology. Pretty soon, Tesla in partnership with Panasonic will be building many, many more lithium-ion batteries at the Gigafactory being constructed in Nevada.

The battery packs being sold by Tesla Energy are effectively the same ones that go into the cars, just packaged differently. Think about it: One business puts these packs into costly to produce cars, while the other just hangs them on a wall in your garage. The car business is terrifyingly capital intensive — sexy, yes, but a money pit. Energy storage, while much less sexy, could be a cash cow.

So who cares in the end if your EV for the everyman tanks? You have a potentially much more lucrative business to fall back on, and that business has a much more favorable cost structure.

NOW WATCH: Elon Musk revealed how you can reserve the new $35,000 Tesla