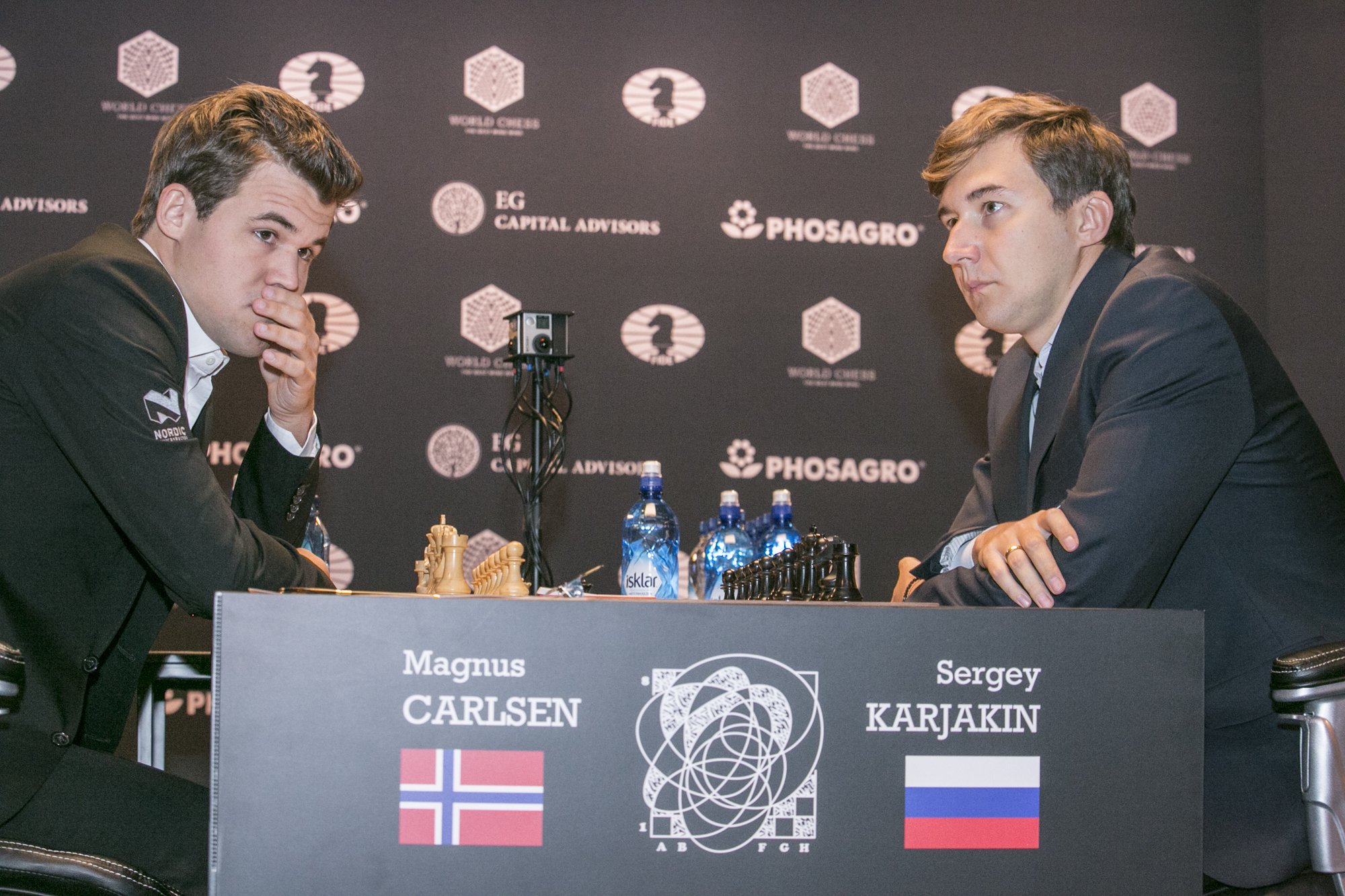 All tied after five rounds.Maria Emelianova

Title holder Magnus Carlsen of Norway and challenger Sergey Karjakin of Russia each have 2.5 points. All games thus far have ended in draws.

There has been no end of complaining at the elite levels of chess about so-called “Grandmaster draws” — relatively quick agreements to call it even after less than 40 moves.

Draws are common in big-time chess because the best players can tell when a position is headed in that direction. In the interest of preserving energy — or avoiding the chance of a loss early in a tournament — GMs will sometimes bail out on a game.

Many vocal commentators and fans hate this. They think it’s killing “fighting” chess and making the game boring.

So far at the WCC, Carlsen and Karjakin have done their best to avoid GM draws. Game 5, concluded on Thursday night, went to 51 moves, but Game 3 was drawn after 78 moves — and Game 4 endured for an epic 94 moves.

Carlsen has obviously been aiming to get into long endgames with Karjakin, to test the Russian’s mettle. Thus far, Carlsen has missed a couple of winning chances, although they were chances that would have entailed very complicated execution, and Karjakin has shown himself to be a resourceful defender.

In Game 5, Carlsen’s strategy almost backfired. With the white pieces, he went for an ancient opening called the “Italian Game” (Giuoco Piano, or “Quiet Game,” dating to the 1500s) — an opening that is rarely seen at this level, but is common among much lower rated players and amateurs. If fact, Carlsen opted for the “very quiet” variation of the Italian Game, the Giuoco Pianissimo.

It was looking like a dead draw until after move 40, when Carlsen allowed Karjakin to open the h-file, setting up a checkmating threat and enabling a pawn sacrifice to get the black bishop, rook, and queen all gunning for the white king. But Karjakin couldn’t pull it off, and the draw was agreed upon. Afterward in a press conference, Carlsen admitted that he had “screwed up.”

As an aside, the games have obviously been demanding, physically an intellectually. A video feed of the players lounge area has shown Carlsen sacked out on a couch between moves, which prompted questions about whether the feed should be discontinued.

With Game 6 scheduled for Friday at 2 PM ET, the feeling-out period could be coming to an end. Carlsen now knows that Karjakin has the stamina to play long, grinding games. And Karjakin knows that Carlsen is going to pick his moments to play attacking chess — if he intends to do that at all.

Quick draws aren’t in the playbook.

Fans would probably like to see a decisive result, however. And both players know that in a 12-game match, it’s risky to draw game after game, upping the pressure for a late win. A loss with a lot games to play can be overcome. A loss with just a few games could be a disaster.