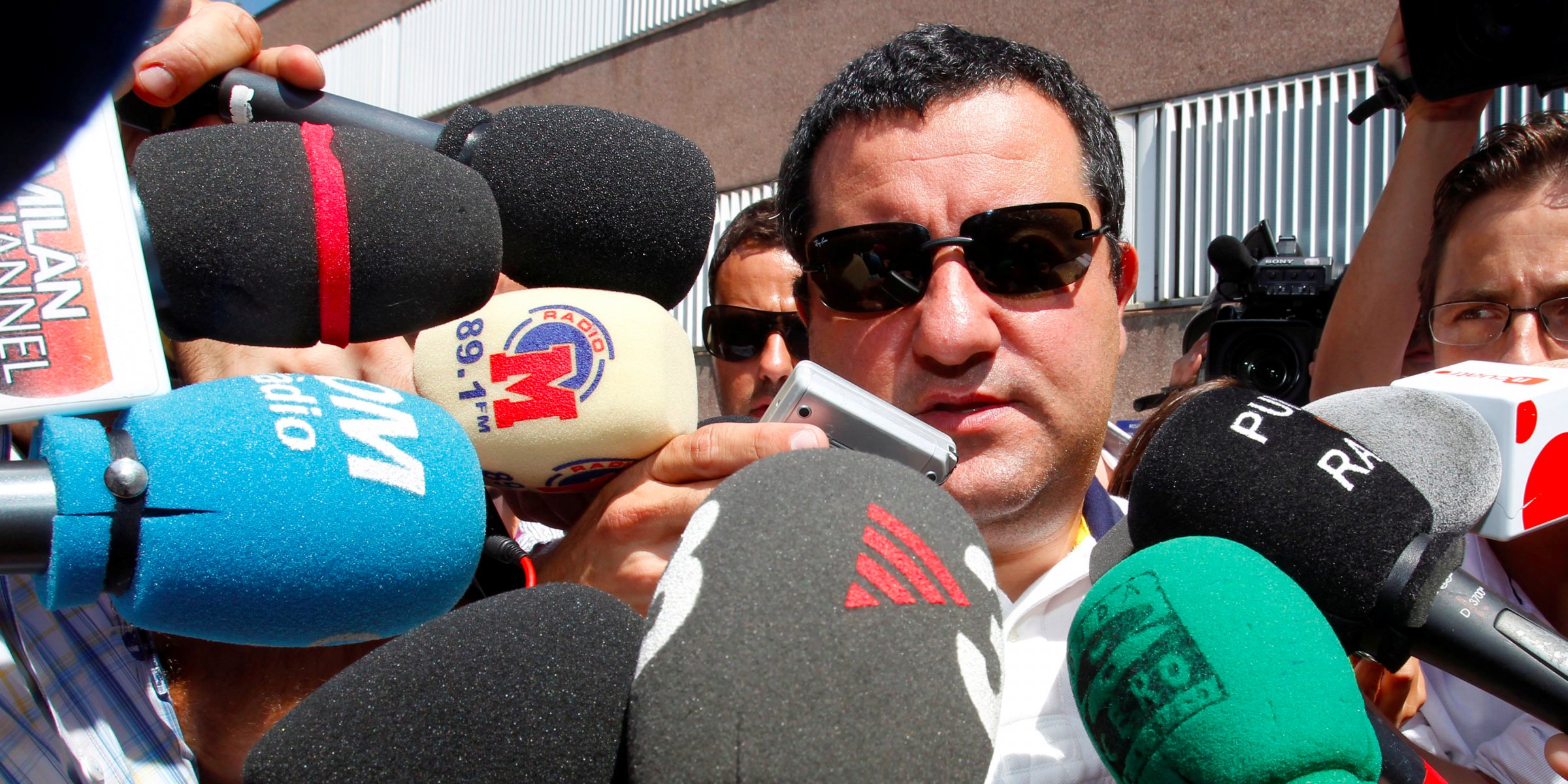 Powerful football agent Mino Raiola represents some of the best players in the world.Reuters

Paul Pogba may have moved to Manchester United just under a year ago, but the fallout from his world record £89.3 million transfer continues.

Thanks to leaked information in a German book, titled “Football Leaks: The Dirty Business of Football,” we found out this week that Pogba’s agent Mino Raiola could earn as much as £41 million from the deal. The revelation was enough to pique the interest of FIFA, which is now informally investigating.

Raiola’s bumper pay day has dominated the sports pages of British newspapers this week, thrusting him into the spotlight. Forbes called him an “enigmatic” figure when it put his net worth at $35.6 million (£28 million) last year, but he is widely regarded as one of the game’s most influential powerbrokers.

Here’s what you need to know about Mino Raiola.

Who is Mino Raiola?

An Italian-born Dutchman, Raiola has operated in European football for three decades.

He played youth level football for HFC Haarlem in the Netherlands, but by 1985 he was more interested in running the team himself and took charge of the under-18 side, aged just 18.

By 25, he was brokering high-profile transfers on behalf of football agency Sports Promotion. Notably, he was responsible for Bryan Roy’s switch from Ajax to Foggia and Dennis Bergkamp’s move from Ajax to Internazionale in the early 1990s.

Speaking eight languages (Dutch, French, German, Spanish, Portuguese, English, Italian, and the more regional Neapolitan) is an obvious advantage during these negotiations, but Raiola modestly plays down his linguistic abilities as good “preparation [rather] than intelligence.“ Raiola now represents 51 athletes and these contracts are worth $356.3 million, according to Forbes. As well as Pogba, other footballers on his books include Everton striker Romelu Lukaku, Manchester United playmaker Henrikh Mkhitaryan, and Nice striker Mario Balotelli.

In a rare interview with the Financial Times last year, Raiola described his relationship with Pogba. “I don’t see him as a client at all. In fact, I dare to say, family.” This closeness extends to other players.

Zlatan Ibrahimovic is another prize asset and the Manchester United striker has spoken openly about Raiola’s influence on his career, having worked with him since 2003.

In his book “I Am Zlatan,” Ibrahimovic recalled their first meeting:

“I didn’t know what sort of person to expect, probably some pinstriped fella with an even bigger gold watch. But who the hell turned up? A bloke in jeans, a Nike T-shirt, and that belly… like one of the guys in ‘The Sopranos.'”

Ibrahimovic said he dishes out tough love to his clients, revealing that Raiola would sometimes remark on his “c**p” statistics. But it clearly had the desired effect.

“That whole attitude, ‘You’re nothing,’ was just his way of getting me to change my attitude… and I really think he succeeded,” he said.

The straight-shooting clearly goes two ways as Ibrahimovic, a black belt in taekwondo, joked last year that if Raiola allowed Pogba to transfer anywhere but United, then he would “break his legs.“ Other figures in the sport are not as fond as Raiola. Sir Alex Ferguson once called him a “t**t” during a meeting in 2012, according to the Financial Times.

It is possible Ferguson was frustrated that Raiola lured Pogba away from Old Trafford to Juventus in 2012. It was one of those rare instances under Ferguson’s watch where a prodigious United talent was poached by a rival.

This summer, Raiola’s time could be dominated by Lukaku, who reportedly wants to leave Everton. Both Chelsea and United are interested in the player, according to The Telegraph and The Guardian. Ibrahimovic and Balotelli’s deals also expire with United and Nice respectively.

All this stacks up to another lucrative period for Raiola and his Dutch firm Maguire Tax & Legal, which owes its name to 1996 movie “Jerry Maguire.” It’s a far-cry from his first job working in a restaurant owned by his father, but the lessons he learned were invaluable to his approach today.

“My father moved from Italy to Holland in 1968 and opened his first restaurant. In the end, he owned 25. My family has always worked hard. It was normal that I helped.

“I was the oldest son, my Dutch was better than my father’s, so I became his consultant, his buyer, his manager. Negotiating and organising, that was my thing. All I can do, I’ve learned in the restaurant.”

What does Raiola do all day?

Agents look after the day-to-day duties of managing and marketing their athlete. A good agent will ensure that their client only has to concern themselves with competing. For Raiola though, it goes one step further.

Speaking to 11 Freunde, he described the fundamentals of the service he provides:

“A good consultant is much more than an intermediary in contract negotiations. He makes sure his players feels safe and protected. I solve the problems of my clients as a father does.

“I am her family. I am the one who shows them where their path can go. My interest is exclusively for my player. I am an altruist [and] I care about my players.”

That’s not to say he doesn’t enjoy the more glamorous side of the job.

He lives among the multi-million dollar yachts in Monaco and is also rumoured to have used some of his proceeds from the Pogba transfer to buy Chicago mobster Al Capone’s old Miami villa for $8 million.