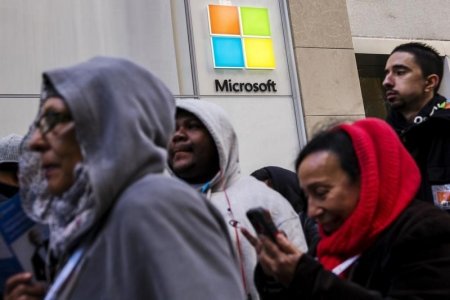 Thomson ReutersShoppers stand in line to wait for the grand opening of a flagship Microsoft Corp. retail store in New York

(Reuters) – Microsoft Corp reported a 10.1 percent fall in quarterly revenue on Thursday, squeezed by a strong dollar as well as a weak personal computer market that has reduced demand for the company’s Windows operating system.

But revenue from the company’s increasingly important “Intelligent Cloud” business, which includes products such as Windows Server and platforms such as Azure, rose 5 percent to $6.3 billion.

Microsoft, under Chief Executive Satya Nadella, has been focusing on cloud services and mobile applications as growth slows in its traditional software business.

(Reporting by Abhirup Roy in Bengaluru; Editing by Ted Kerr)