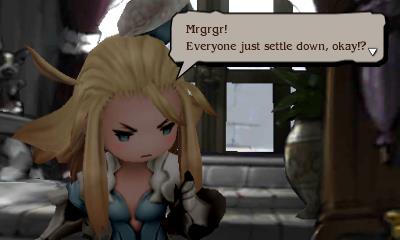 Bravely Default heroine Edea Lee is returning as a playable character in the sequel Bravely Second: End Layer, and it’s hard to tell who is scarier: her or her recently acquired companion, Magnolia Arch.

As seen in Magnolia’s recent character trailer, the femme fatale has the power to wipe out entire squads of soldiers on her own and do so with a lot of style at the same time. But Edea has… the growl.

Terrifying. Between the two tough females. Tiz and Yew will have a lot on their hands throughout this entire journey.

It’s hard to say who is the best of the original four protagonists in Bravely Default, but Edea often ranks pretty highly on the popularity charts. Her appearing as a playable character in the sequel isn’t a coincidence. Bravely Second can only benefit with a lot more “mrgrgr!”

Bravely Second: End Layer will launch for the Nintendo 3DS on April 15.