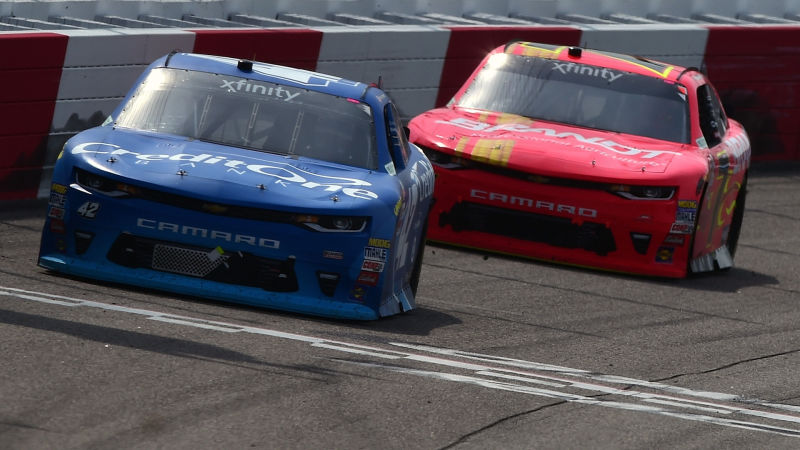 When NASCAR announced its overtime line in 2016, I had hopes for it. I thought a consistent line could help avoid controversy, unlike the old rule for cautions at the end of the race, and shushing conspiracy theorists about “rigged races” is almost always a positive. But then I saw the overtime line used in a race.

The overtime line replaced the green-white-checkered finish in NASCAR’s top divisions, to be used in the case of a late caution that makes a race go over its scheduled distance. The basic function of the rule is that “overtime” will consist of two laps, like the old system, and once the leader reaches the overtime line on the first lap, the next flag ends the race—whether that be a caution or the checkered flag. No more attempts at finishing the race under green at that point.

The line proved a menace to racing action yet again at the Xfinity Series race on Saturday at Richmond International Raceway, when the middle of the field spun into a wreck midway through the first lap of the overtime attempt. The race finished under caution, giving Kyle Larson, Monster Energy NASCAR Cup Series driver and self-proclaimed “last true racer” in that series, the victory.

Under the old system, the race would have had another attempt to finish under green at the timing of the caution. That would have been a far more satisfying ending to the race.

In theory, the overtime line gave NASCAR a further association with ball sports and removed some issues that could arise under the old green-white-checkered finish—by making the one-to-go white flag, not a line, the official marker of that old system, determining the caution timing in regards to the flag waving became murky.

But the overtime line comes with its own, and far more annoying, problems. Back when I was confident about the line, I didn’t realize where it would be on each track on the NASCAR schedule. A lot of race tracks painted the line on the backstretch, meaning that the overtime attempt becomes official—with the next flag ending the race—much sooner than it did under the old system.

That’s what happened at Richmond, resulting in a dud of a finish under caution when things easily could have gone green again. I’m not all about wrecks and I don’t want a race to go green again just to see another, but I am about racing to the finish. After all, what’s the point in driving or watching hundreds of miles to not have someone win the thing outright?

But that isn’t the only problem. This overtime line is just as prone to murkiness and conspiracy theories about NASCAR officials “rigging the race” as the old green-white-checkered system. If NASCAR ended a race under caution with the green-white-checkered rule, people tended to complain and debate about the position that the white flag was in when the caution came out. If it was a close call and NASCAR ended the race, conspiracy theories were inevitable.

The same thing can happen with the painted-on overtime line. The concept seems like it wouldn’t be debatable on the surface, but just think about it: in the case of Richmond on Saturday, there was a delay between the caution-causing wreck and NASCAR making the caution flag official. The wreck occurred midway through the lap, and flag came after Larson crossed the line. That could easily be seen as an attempt to end the race as it was.

The best way to approach it could be making the start/finish line the “overtime line,” and disregarding the white flag in the first place. The white-flag lap doesn’t start until the drivers pass the line, anyway, and waving it is just a symbol to let everyone know the race is almost over.

Perhaps I’m just bitter and nostalgic about it all. I do miss the green-white checkered finish. But I’ve succumbed to saying “overtime” in the context of car races, so please, NASCAR, at least let me see a competitive end to those races.

Kyle Larson Feels Like The ‘Last True Racer’ In NASCAR

NASCAR Is Choking On Its Constant Rule Changes

NASCAR May Give Its Racers Two Options For Tires Next Year