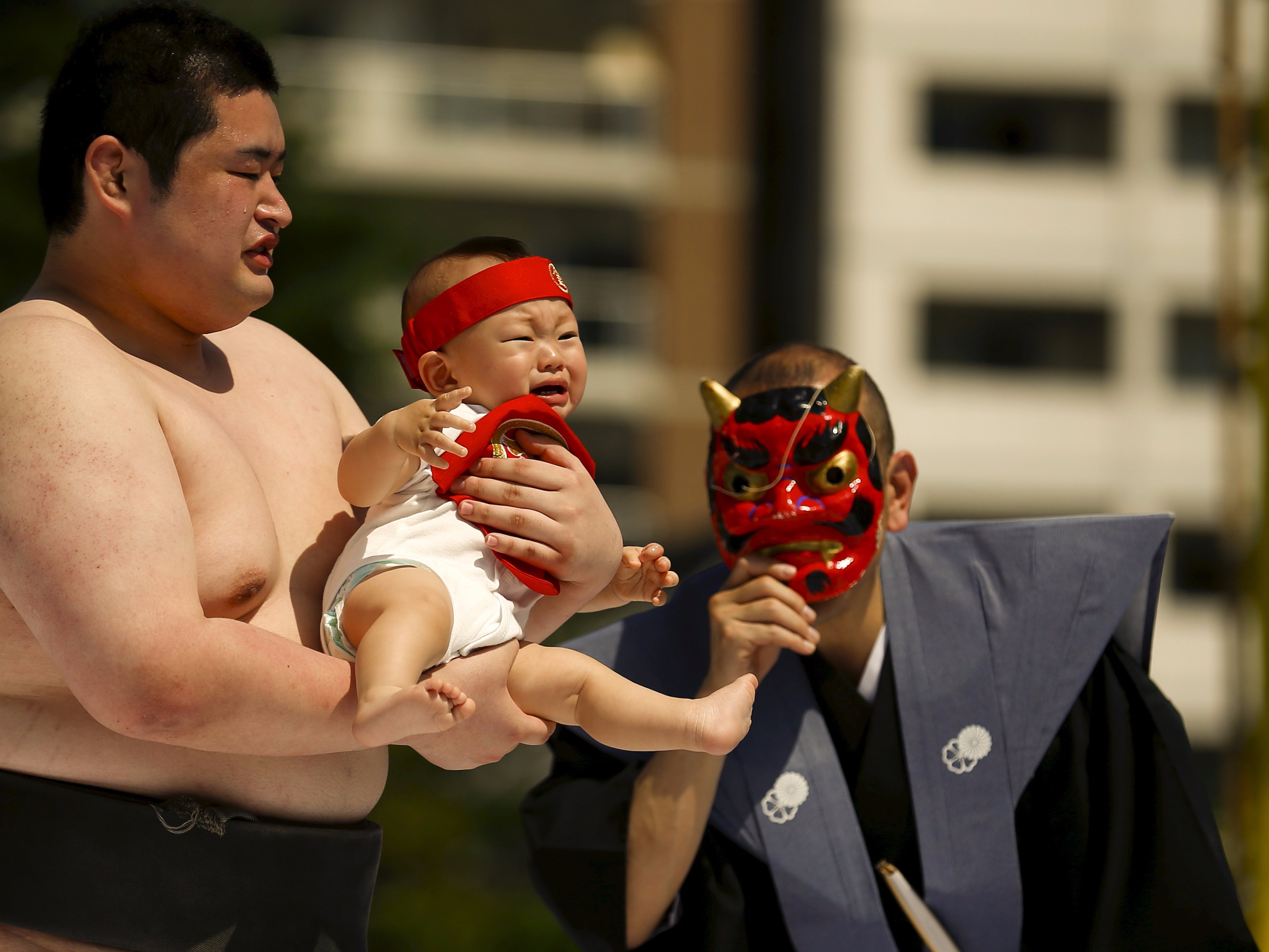 REUTERS/Thomas PeterA ring assistant wears a mask to scare a baby held by an amateur sumo wrestler during a baby-crying contest at Sensoji temple in Tokyo on May 30.

Shannon McConaghy, a portfolio manager with Horseman Capital Management, a London-based $2.75 billion hedge fund, says that it will be Japan’s banking-industry collapse that “blindsides the market.”

“I do think there will be a banking crisis in Japan,” McConaghy told Business Insider.

And according to him, it will likely be a global event too.

We have seen Japan have banking crises in the past without destroying global economic trends, but at this moment I think the emerging market fragility and low growth could see a crisis in Japanese banks trigger sustained risk-off in global markets, particularly given the importance of Japan as the world’s largest net foreign creditor.

Risk-off suggests that we would enter an environment where risk assets fall and safe assets rally. Historically, Japan tends to fall more when markets move in to risk-off mode.

A bear among bulls

McConaghy, who runs Horseman’s Japan-focused fund, is a bear among bulls when it comes to Japan. So far, it’s been working out quite well for him.

Horseman’s Japan fund, which has about $24 million at work right now, started trading back in December. The fund rose 11.57% in February and was last up 17.06% year-to-date. The fund has been short Japanese equities, with the largest short being Japanese regional banks.

Regional banks remain the fund’s largest short grouping. Investors I meet tend to think they have missed the opportunity to short Japanese regional banks. I feel there is substantial downside remaining as real earnings and book values are likely negative for many. They are poorly understood with limited analyst coverage and are a very non-consensus shorts with limited reported short interest.

Before he joined Horseman in 2014, McConaghy spent his career working in the treasury, credit, and risk-management departments of investment banks, giving him a glimpse into how they work. At Horseman, he’s spent the last year and a half digging into the Japanese banking system. Kim Kyung-HoonA monk stands in front of a fire to burn old items, which have been used in temples and shrines, during a New Year’s Eve ceremony at the Zojoji Buddhist temple in Tokyo.

“I worry for Japan’s economic outlook as I compiled the complete picture of the bank system,” he told Business Insider, adding, “I get queasy at the idea of how this is going to play out.”

According to McConaghy, there’s a confluence of factors at play, including regional banks overstating recurring earnings, a shrinking mortgage market because of demographic changes, rising competition from semi-government players, the impact of monetary policy causing cash hoarding among households to accelerate, and a massive amount of hidden nonperforming loans that will be a “time bomb” as baby boomers start to turn 70.

McConaghy said that he has come to the conclusion that, in the last year, Japan’s regional banks have vastly overstated their core recurring earnings with one-off equity gains. As interest rates have fallen in the last four years under the Bank of Japan’s quantitative easing, he noticed that the regional banks have somehow reported an increase in “Interest and Dividends on Securities.”

It’s especially surprising, according to McConaghy, because 75% of the regional-banks securities holdings are in fixed income: 53% government bonds and 22% corporate bonds. Interest rates have fallen to essentially zero.

McConaghy said that banks have been using private-investment trusts’ profits from equities to hide the decline in core-interest income. This will backfire now that equity markets have fallen. Japan’s Topix index has fallen nearly 11%, while the Nikkei has more than 9.4%. “To me, it seems clear that the recurring earnings that the banks have been reporting are unsustainable and, in fact, may now become negative if they correctly reflect the equity losses they have,” he said.

Another factor at play is that the regional banks are likely to see their largest market — mortgages — decline significantly because of demographic changes. Japan has a low birthrate and an aging population.

He wrote in another note:

Japan’s regional banks face an accelerating population decline. Some will see their key mortgage market (30-49 year olds) decline by over 20% over the next 10 years. As the playing field shrinks, regional banks will also now face a reinvigorated Japan Housing Finance Authority and a new mega-contender in Japan Post Bank. Many will not be able to stay in the ring.

Then there’s also the impact of the Bank of Japan’s monetary policy. Regional banks, which make money from lending money at higher rates than they charge to depositors, have been squeezed by low interest rates. There’s also been an acceleration of cash hoarding among households, he noted.

What worries McConaghy the most, though, is the huge number of hidden nonperforming loans (NPLs).

“The ignition point for this time bomb will likely come with the mass retirement of bankrupt ‘baby boomer’ small to medium size enterprise (SME) owners that have just started turning 70,” he wrote in another note to investors. Thomson ReutersAn electronic board showing market indices outside a brokerage in Tokyo.

Those borrowers are already not making payments on loans, according to McConaghy. As they age, they can no longer run the company, and it has to close because there’s no one else who can run the business.

The regional banks have been asked to extend credit even though they haven’t been getting repaid. As the bankrupt baby-boomer borrowers retire, the banks will have to do a write down of whatever they’re not getting paid back, according to McConaghy.

Japan has been an economy that’s living on borrowed time via hidden nonperforming loans and irregular accounting of equity gains as interest income. The inefficient allocation of labor resources to zombie companies amidst a rapidly declining working age population will continue to dampen economic activity until we see a washout of economically unjustified borrowers.

These are just a few of the “tremendous problems” in the Japanese regional-banking system. A number of these issues are coming to a head, meaning that it’s no longer sustainable, according to McConaghy.