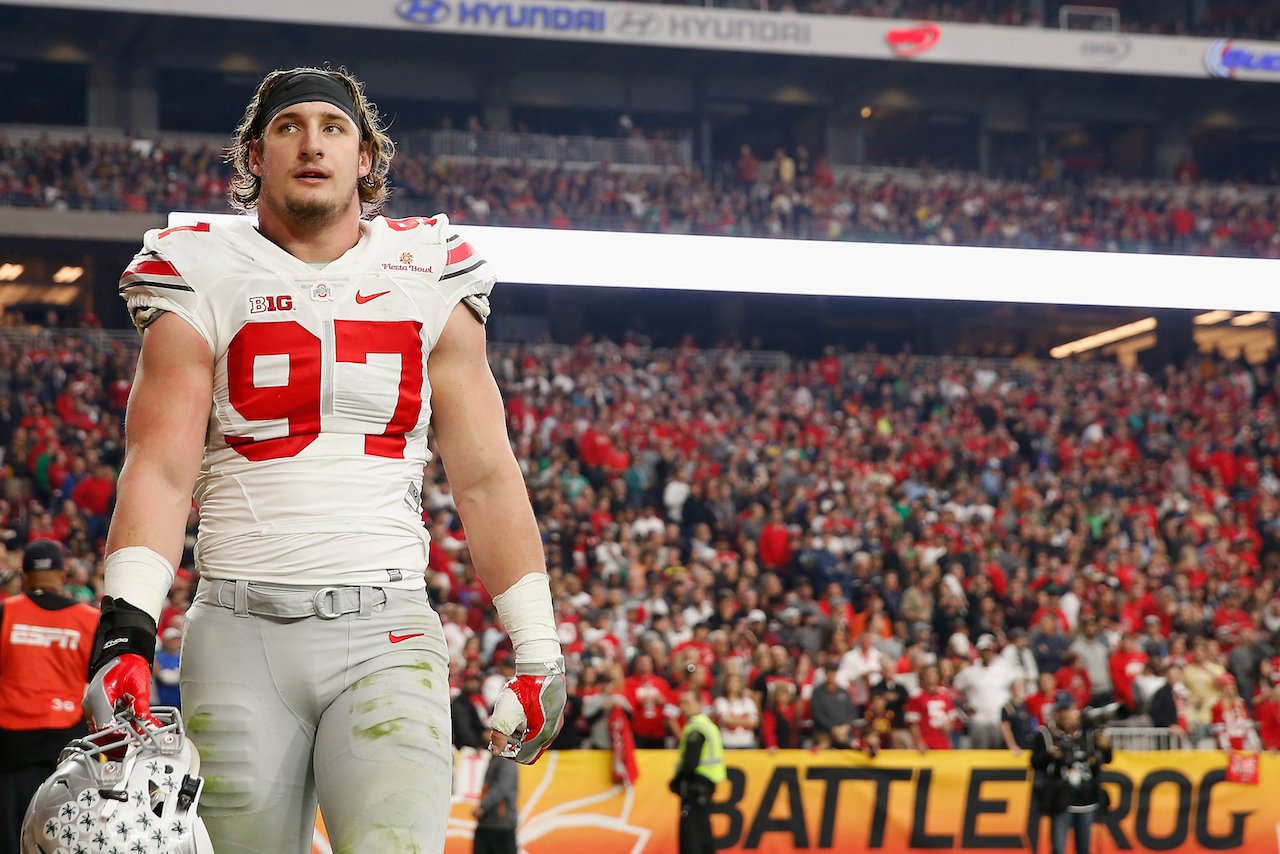 A two-time first-team All-American and a two-time winner of the Smith-Brown Defensive Lineman of the Year Award (and the winner of the Nagurski-Woodson award and a national championship), the junior defensive end announced after his team’s Fiesta Bowl victory over Notre Dame that he will forego his final year of NCAA eligibility to enter the NFL Draft, where ESPN’s Mel Kiper projects he will be the top pick.

With all the success Bosa has had, and all the stereotypes associated with the crazed college-football culture at a place like Ohio State, you’d expect Bosa to have lived like a prince in Columbus.

But in a piece this week on SI’s site Campus Rush, however, Joan Niesen revealed that Bosa spent his junior year living in relative, quasi-forced isolation.

After he was suspended for the Buckeyes’ season opener against Virginia Tech for an unknown “transgression” (ESPN reported at the time that it was either for marijuana or an academic violation), Bosa made the decision “after hundreds of conversations” with Ohio State head coach Urban Myer and his family to live by himself and spend what little free time he had at home.

His sparse apartment was furnished with little more than an Xbox, DVDs, football gear, clothing, cooking utensils and the minimum amount of furniture. But he was comfortable, and there was no pressing temptation for him to join the fray. For the entirety of last spring and summer, Bosa spent much of his time alone, cooking Italian dinners from recipes his mother had taught him and playing video games to pass the time. He had never really enjoyed the hassle of going out in Columbus anyway. Heads turning, girls clamoring, fans chatting—none of it has ever truly appealed to him.

Bosa and running back Ezekiel Elliott had previously lived as roommates since their freshman year, but Bosa told Nisen that he didn’t mind the comparatively isolated lifestyle.

“I never really loved being in the spotlight. I was never that kind of person. I pretty much like sitting in my apartment, being in a dark cave for hours,” Bosa told Neisen. “If I spend the whole day there, I have no problem with that. I’ve got a tight circle, and I’m not really letting a lot of people into my life.”

When Bosa hears his name called in the draft in April, he’ll likely make north of $20 million in guaranteed money. One might argue that a paycheck that large makes Bosa’s lonely existence worth it; another “transgression” would cause his draft stock to plummet and cost him millions.

For Bosa, then, spending a year palling around with his Xbox is a smart business decision. If he can’t make any money as an Ohio State Buckeye, then he might as well lock himself in an apartment, turn off the lights, and watch the clock count down to draft day. As he twiddles his thumbs, he can take pride in knowing that Ohio State’s new 15-year, $252 million deal with Nike is a lot bigger than the sportswear giant’s deal with Michigan. Beating your rival is what college sports is all about.