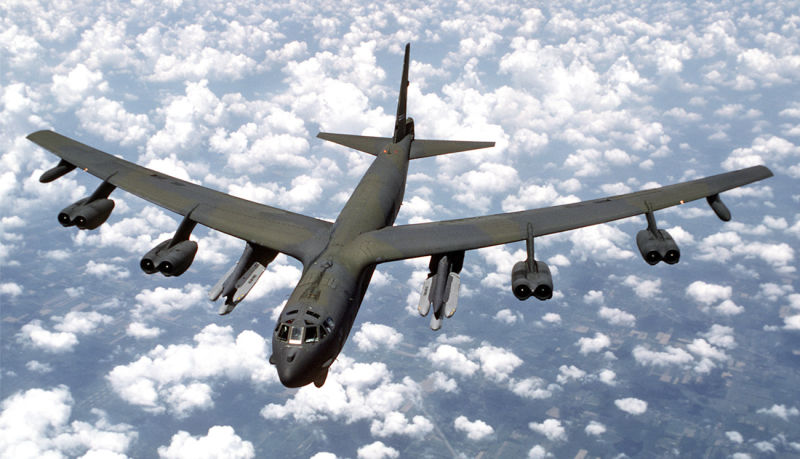 Cruise missiles played a major part in the opening strikes of Desert Storm. The vast majority of these were BGM-109 Tomahawks launched from U.S. Navy vessels, but 35 were experimental air-launched cruise missiles launched by B-52Gs on a top-secret, ultra long-range mission.

The actual classified name of the operation was Secret Surprise, but bomber crews from the 596th Bombardment Squadron at Barksdale AFB had nicknamed it Secret Squirrel. The mission was kept under tight secrecy, nobody involved could discuss it unless the other person was read-into the operation, and even then only under certain controlled circumstances.

The idea was straight forward, seven B-52Gs would fly a 35 hour, 14,000 mile nonstop route from their bases in the U.S. to the Middle East and back. During this flight they would deliver an experimental conventional (instead of nuclear) armed variant of the AGM-86 Air Launched Cruise Missile, known as the AGM-86C Conventional Air Launched Cruise Missile, or CALCM for short.

The CALCMs used GPS for pinpoint accuracy, something that the Tomahawk, an pretty much any other munitions of the time period lacked. This was a major innovation that changed the nature of air-to-ground weaponry. Today GPS is a primary form of guidance for all types of bombs and standoff weapons and allows our air forces to strike targets even when they are totally obscured by clouds or smoke.

The idea was for these highly precise missiles to strike eight strategic targets deep in Iraqi territory, most of which were related to command and control and air defenses. This would help blind Saddam’s commanders as to the armada of aircraft about to strike targets all over their country.

You have to kick down an enemy’s front door somehow, and in the case of Operation Desert Storm, a… Read more Read more

This 35 hour round-robin combat mission would be the longest ever recorded at the time and was a precursor to the global strike missions that were subsequently a part of every major conflict that followed. These types of missions are trained for on a regular basis today by B-2 and B-52 crews.

Secret Squirrel was also the emergence of the B-52 as a precision conventional strike weapon, a mission set it is fully adapted to today and one that the USAF continues to invest in heavily.

The B-52 has only been able to carry smart weapons on its external pylons, with its internal… Read more Read more