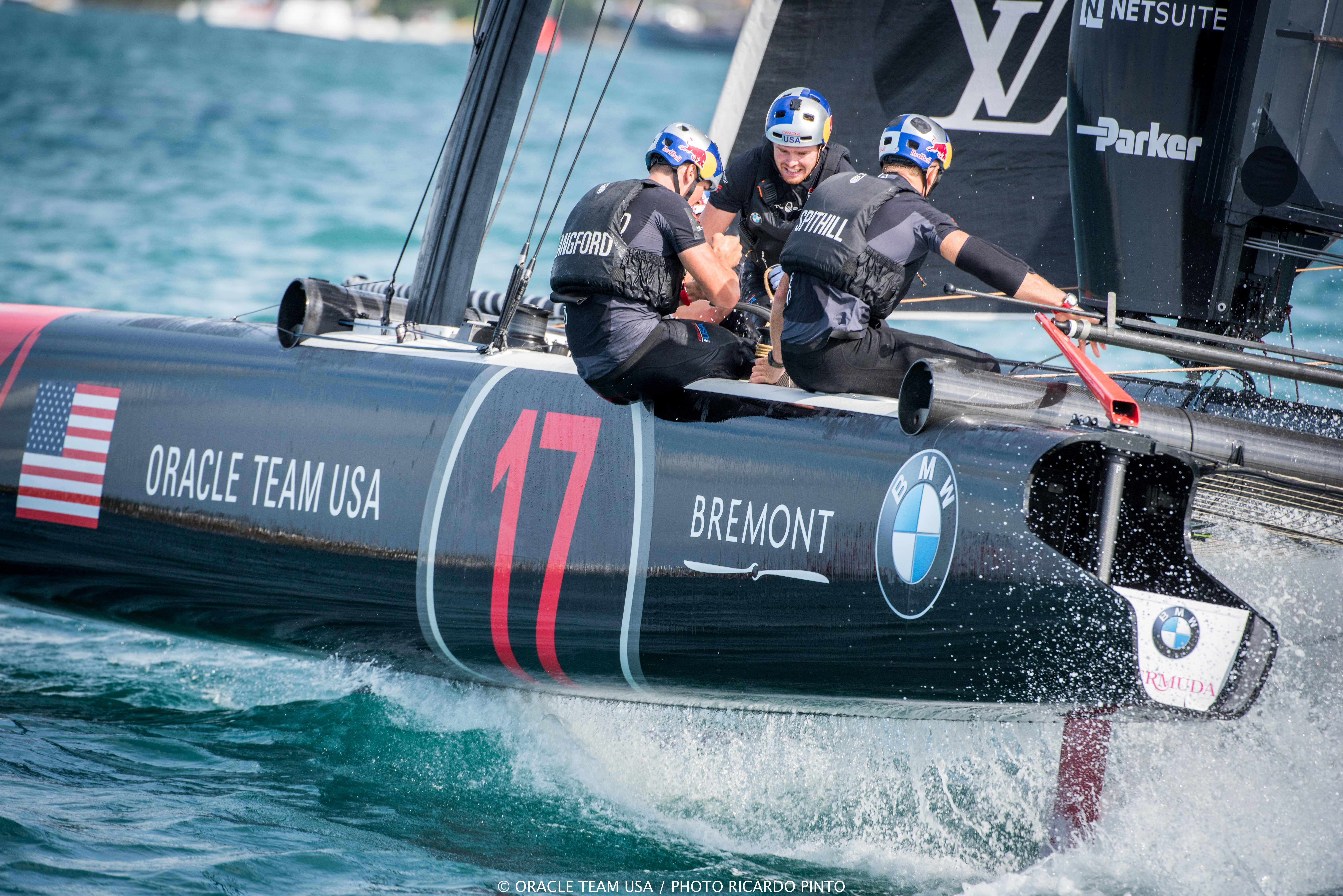 Oracle Team USAOracle Team USA training in Bermuda. At right is skipper Jimmy Spithill, a two-time winner of the America’s Cup, both times with Oracle.

Oracle Team USA, the defender of the 2017 Americas Cup, the most prestigious sailing race in the world, is making big speed gains in their new boat — setting a new team speed record this week while training in Bermuda.

“It doesn’t quite feel like your in control,” Scott Ferguson, a lead naval architect for Oracle Team USA who was on board at the time, said.

That’s understandable. Even for some of the best sailors in the world, skimming above the water at those speeds is a frightening experience.

These yachts use foils — winglike surfaces extending below the boat’s twin hulls — to lift the entire craft of the water and escape its drag. The high speeds mean sailors must wear helmets and impact-resistant clothing.

Foiling has completely changed the America’s Cup, a big element of an effort by software magnate and Oracle Team USA financier Larry Ellison to make the sport spectator and television-friendly.

The racing was indeed a spectacle of epic proportion, but with TV ratings of about one million viewers, it was still far from worth the estimated $100 million price required to field a team, Reuters reported. To cut costs for the 2017 cup in Bermuda, the boats will be smaller and regulations will restrict development to the wing, foils, rudder, and the hydraulic systems that move many of these appendages around. This means the teams will have fewer areas with which to eek out an advantage before racing begins next year.

“I expect that the competition will be much closer [in 2017],” Ferguson said.

But due to the already high speeds, what little changes they can make go much further.

“We were always trying to make gains of tenths of a knot,” Ferguson said. “Now, a change can find a knot or a couple of knots.”

A designer of racing yachts for around 25 years, Ferguson worked with Luna Rossa, the Italian challenger for the cup from 2000 to 2007. The University of Michigan-trained naval architect then joined “the home team,” as he put it — he’s been at Oracle Team USA ever since.

Ferguson was part of the shore team at the 2013 cup in San Francisco, when Oracle Team USA made an improbable comeback from an 8-1 deficit to win the first-to-nine event. The team arrived at the event with a slower boat, but managed a series of technical and strategic changes that eventually turned the tide.

At the time, Ferguson was responsible for the wing — the massive, rigid structure that substitutes for a sail. Changes made to the wing’s setup played a large part in the team’s come-from-behind victory, former Washington Post contributor Bruce Knecht wrote in “The Comeback,” his chronicle of the 2013 race.

Now, Ferguson is in charge of many more elements of the boat, and the challenge is immense. Especially with the competition right next door.

Emirates New Zealand and SoftBank Japan, two challengers for the cup, are also based in Bermuda. The teams regularly spar out on the water, which can be both a good indicator of Oracle’s relative progress and an ever-present source of pressure for the Oracle crew.

But now they have a new team speed record on their hands — another milestone on the long, exhaustive journey to the 2017 regatta.

The team will compete on May 7-8 in the New York harbor as part of the Louis Vuitton America’s Cup World Series, an international list of races leading up to the 2017 event. NOW WATCH: The European Space Agency just unveiled its plans to build a base on the moon