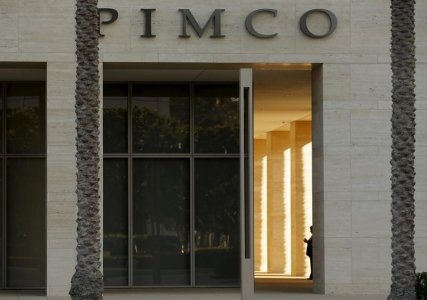 Thomson ReutersThe offices of PIMCO are shown in Newport Beach

Pimco said that the Total Return Fund would have had an outflow in December without the impact of the capital gains reinvestments.

“The Total Return Fund’s outperformance came from several areas related to our themes of economic and monetary policy divergence around the world, including a more defensive stance with respect to credit,” said Scott Mather, a manager on Total Return and Pimco’s CIO for core strategies.

Mather told Reuters that there were more opportunities in some credit sectors currently than there were in 2015 because of a change in valuations. He also said that market expectations for deflation would diminish in coming quarters.

Mather said that the Federal Reserve would likely hike rates again in March and continue to hike two or three more times this year.

On the Income Fund’s performance, Pimco Group CIO Dan Ivascyn said: “The stabilization of the U.S. housing market and a drop in Australian interest rates, among other factors, helped the Income Fund deliver solid performance in 2015, in spite of periodic bouts of volatility.”

Ivascyn told Reuters that he still saw value in both high-yield and investment-grade energy credits. He said that oil prices could rise to between $50-60 a barrel by year-end, but that prices would be volatile in the meantime. U.S. crude oil futures settled at $35.97 a barrel on Tuesday.

“Within the energy space, it’s an area where we resisted the temptation to get in early last year, during that initial recovery stage, and are beginning to see value now, but you need to be highly selective and very careful in what credits you’re focusing on,” he said.