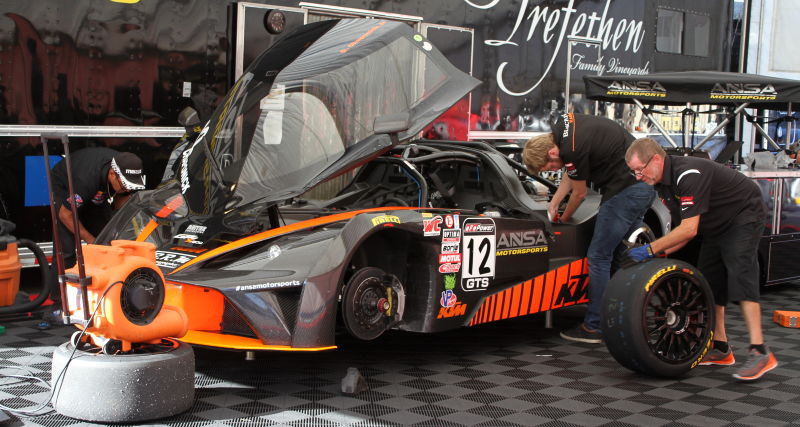 If there’s one place to see really odd race cars you’ve never seen before in the United States, it’s Pirelli World Challenge. This weekend’s massive 103-car field at Circuit of the Americas features everything from Honda Accord Coupes and Nissan GT-Rs to KTM X-Bows that resemble a space-pod more so than a car.

One of my favorite things about Pirelli World Challenge’s adoption of the global GT3 and GT4 specs is that it’s brought some rare and bizarre cars that we rarely ever see here into the series. Take, for example, these three.

We’re used to seeing the KTM X-Bow as an open-top track day warrior, but for racing duty, the KTM X-Bow GT4 has been given one big swinging canopy.

Inside the car is as bare-bones as you’d expect from KTM’s hardcore track toy, but the giant hinge and roll cage tubing give away that it’s something a bit more special.

Hands down, this is the most spectacular roof I’ve ever seen on a (real-life) race car.

Even the back of the car looks like a spaceship. They’re also quick, with Dore Chaponick Jr.’s No. 12 KTM posting the fastest lap time in the first GTS-class practice session of the weekend, a 2:29.509.

The best name of them all, however, is the Sin R1 GT4.

This is the one time I think we can all agree that Sin (this Sin) is good.

Racers Edge Motorsports is campaigning a pair of the wacky British-Bulgarian sportscars, and they’re just as wild as their name suggests.

The Sin races in the GTS class with the other GT4 machinery (including the X-Bow).

Underneath the fancy bodywork lies a mid-mounted LS3 engine.

Like many of the other rare cars out this weekend, there’s carbon fiber peeking out everywhere.

Under the nose, a massive radiator helps keep things cool, and huge brake discs make sure that the car actually stops at the end of COTA’s long straights.

The car’s big, wild side fins also help keep it cool out on track.

Last, but not least, there’s the Ginetta GT4. Ginetta is a British marque, and it’s not unusual to see these race in Europe, but this is the first time I’ve seen one in the United States.

Performance Motorsports Group brought a pair of Ginetta GT4s to this race weekend to compete in the same GTS class as the X-Bow and Sin.

Unfortunately, if you thought a nice race weekend would be a quiet escape from political madness, the No. 34 Ginetta is all about The Donald.

There’s something about Trump that compels his fans to put his presidential run on a racing livery, I guess.

The Ginetta almost looks like a regular car compared to the wild KTM X-Bow and the insane tube-frame Sin R1, but it still looks like a crazy no-nonsense speed machine.

What’s your favorite weirdo car of the weekend? I’ll be out here checking out the action all weekend long.