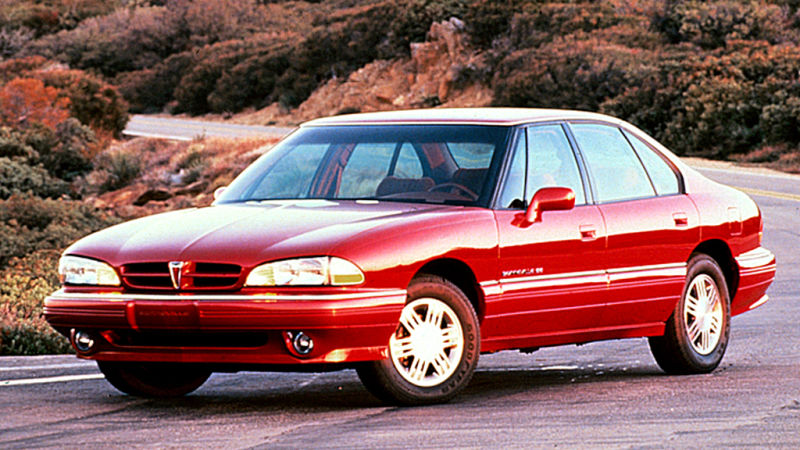 “That’s what Pontiac is all about;” Pontiac’s Jack Folden told Car Styling on showing off the design of the upcoming 1992 Pontiac Bonneville. “Romance, sex. It’s the kind of car that makes people want it, rather than need it.”

These may well be the most aspirational, almost painfully hopeful assessments of a car ever described. That Bonneville was a re-bodied ‘H-Body’ design, a not-quite-full-sized lump of a car. If there’s a car from the ‘90s that has aged worse, I don’t know what it is. But at the time, at least Pontiac was happy to talk up the hit it had on its hands.

Pontiac’s ads, voiced by Patrick Stewart of all people, described the car as “inspiring to the eye…and to the touch.” It is almost beyond belief now that at some point Captain Picard told Americans that a midsize Pontiac was about to blow their minds.

Now, I just so happen to have the May 1991 issue of Car Styling in front of me after making a request of the Jalopnik Central Branch Historical Archive And Pneumatic Tube Museum, and in the periodical’s article on the upcoming H-Body cars is this lovely review of the Pontiac:

The Bonneville is therefore the most dramatic of the H-body trio. It has completely shaken off the predecessor’s lookalike syndrome, which the Pontiac designers had tried very hard to differentiate by rounding the nose and tail. In the new Bonneville, Jack Folden and his Exterior team were given free reins to pursue and realize their dream Bonnie. Folden says, “The new B﻿onneville is not tied in with what we call our type, or even domestic looks. It’s a good international design; people wouldn’t readily identify American or anywhere. They would ask, ‘What is it?’”

“The predecessor had gone rounder and softer within the confine—rather successfully,” continues Folden. “Pick up some of the cues (from the old)—Coke bottle line, very round, smooth and clean.” He noted interesting reactions of people attending the clinics. They would invariably touch the model, and feel its lines and surfaces. They would then describe the car’s anatomy as if it were a living thing, like shoulder, hip, muscular, etc. “That’s what Pontiac is all about; romance, sex. It’s the kind of car that makes you want it rather than need it,” concluded Folden.

Folden did not actually conclude there.

He went on to talk about the construction of the car itself “it’s how these parts, like the backs of the steering wheel rim and the door handles, feel that conveys quality” and the top trim SSEi model, which Car Styling described as “exotic,” and said that Pontiac’s design team “lavished” attention on it.

Folden explains, “a potentia﻿l buyer comes into the showroom, and is immediately drawn to an SSEi version. ‘Wow I want that…but can’t afford it.’ Then he comes to a base SE-type model which is more in his budget.”

Car Styling explains that Folden wanted the SE to be “clean, elegant” on its own, and that it should appeal to, say, an Audi buyer.

If you’re wondering how this all turned out for Pontiac, please go to your nearest Pontiac dealer and ask them.

Let Me Tell You About A Real King Of The Road: The Corvette Fixed Roof Coupe

Let Me Tell You About A True Mighty Muscle Machine: The Pontiac Firebird Trans Am