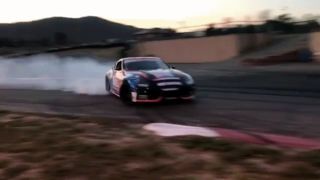 We will have to wait a few more weeks for Formula Drift’s reigning champion (and useful drinking buddy) Chris Forsberg to debut his twin-turbo, anti-lag VQ V6 in competition. The team is still working out the engine’s bugs. For now, we can only hear it in testing and it is WHRRRTTCHCRRKRKKKvrrrtvrrrtvrrtWHKRRRKRKRKRK.

The Nameless Performance team responsible for this thing calls it a twin-anti-lag setup as it has two turbos both of which have WRC-style anti lag on them, giving the engine its characteristic running-washing-machine-falling-down-a-flight-of-stairs sound.

If you want to hear Nameless Performance explain how their system works just like the top teams in the World Rally Championship, listen to Nameless’ John Hoyenga dish on the Maximum Driftcast podcast here.

Nameless Is A Fun Operation

This Is What A 1,200 Horsepower Twin-Turbo, Anti-Lag V6 Sounds Like

How Is A Pro Drift Car Different From A Pro Rally Car?

Why Wait for Toyota? The GT86 Rally Car Is Already Here