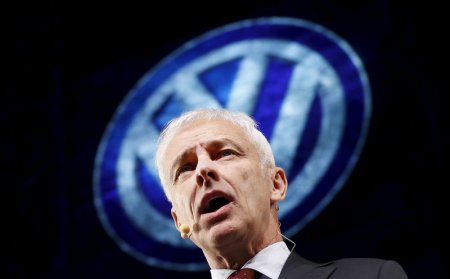 BERLIN (Reuters) – The Porsche-Piech family clan, which control a majority of the voting rights in Volkswagen , are standing behind the company’s chief executive, insiders say, despite criticism of his handling of the emissions crisis during a U.S. visit.

Matthias Mueller was already under fire for waiting until last week to make his first U.S. visit since the emissions scandal erupted in September and then exacerbated the situation by appearing to play down the seriousness of the cheating by Europe’s biggest carmaker in a radio interview.

“Everybody can see that Mr Mueller’s U.S. trip was not successful. He made a mistake. But that does not mean that we move away from him,” said a source close to the board. “The Porsche and Piech families stand firmly behind Mr Mueller.”

Senior members of the Volkswagen supervisory board are due to meet on Tuesday to discuss the progress of an internal investigation into the scandal, insiders said.

According to Germany’s Bild am Sonntag newspaper, doubts are growing among board members – particularly influential trade union representatives – over the former Porsche boss, who took over at Volkswagen in September after longtime CEO Martin Winterkorn resigned. Volkswagen rejected the report.

Another Volkswagen insider said the board was prepared to forgive Mueller for his mistakes as he epitomised the new culture the company is trying to cultivate. “There is nobody else,” the source said.

Mueller angered some U.S. government officials last week when he blamed the scandal on a misunderstanding and called it a technical, not an ethical, problem.

After speaking with Mueller, U.S. environmental officials said on Wednesday talks would continue with Volkswagen aimed at reaching an agreement on a fix for nearly 600,000 diesel vehicles that emit up to 40 times legally allowable limits.