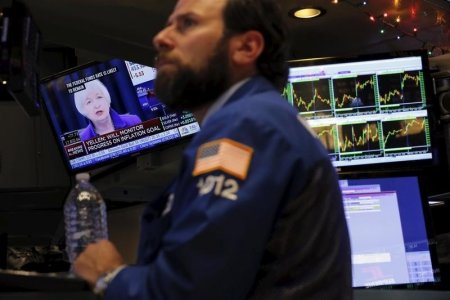 NEW YORK (Reuters) – While Federal Reserve Chair Janet Yellen is the one tasked with delivering a message over the next two days when she speaks to Congress, financial markets are keen to know if she has absorbed their message to her: stifle your rate hike plans.

In the 52 days since investors last heard from Yellen, when she held a press conference after overseeing the first U.S. interest rate hike in nearly a decade, markets have been roiled with volatility and increasing doubt about the health of the U.S. and global economies.

In that time, the S&P 500 has lost nearly 11 percent of its value and the 10-year note’s yield has declined by half a percentage point.

The upshot: Investors have abandoned any notion that more rate increases are coming from the Fed any time soon.

“Investors are pricing in no chance of a rate hike until summer of 2017, and the Fed is indicating four more,” said Brian Reynolds, chief market strategist at New Albion Partners. “It’s a big gap, and it’s widened dramatically this year.”

But key financial futures markets in the weeks following that decision have substantially driven down the level of anticipated interest rates for years to come, placing them squarely at odds with policymakers’ projections.

For instance, the price on the Fed fund futures contract expiring in December 2016 now implies the fed funds rate will be 0.43 percent at year end, within the current rate range.

That suggests just a 1-in-5 chance the Fed will pull off even one more rate hike this year. On the day of the rate hike, however, the implied yield on that same contract was 0.83 percent, reflecting expectations for two rate hikes in 2016.

The fed funds rate implied by the contract expiring in December 2018 , when policy makers project it will hit 3.3 percent, now stands at just over 1 percent. It had been around 1.85 percent on Dec. 16.

“The Fed has been able to influence the very near-term … contracts, but their control of things out the curve has been pretty weak,” said Mike Cloherty, head of U.S. rates strategy at RBC Capital Markets, a primary dealer in Treasury securities.

To be sure, Yellen and her colleagues already appear to be damping expectations for future rate increases.

In its late January policy statement, the Fed altered its language to acknowledge that global financial and economic developments had clouded the outlook. Top Fed officials, including Vice Chairman Stanley Fischer and Federal Reserve Bank of New York President William Dudley have nodded to those concerns in recent speeches and interviews.

Still, markets are keen to see if Yellen follows their lead.

“The issue is whether Yellen indicates the FOMC is willing to change its stance and move closer to investors,” Albion’s Reynolds said.