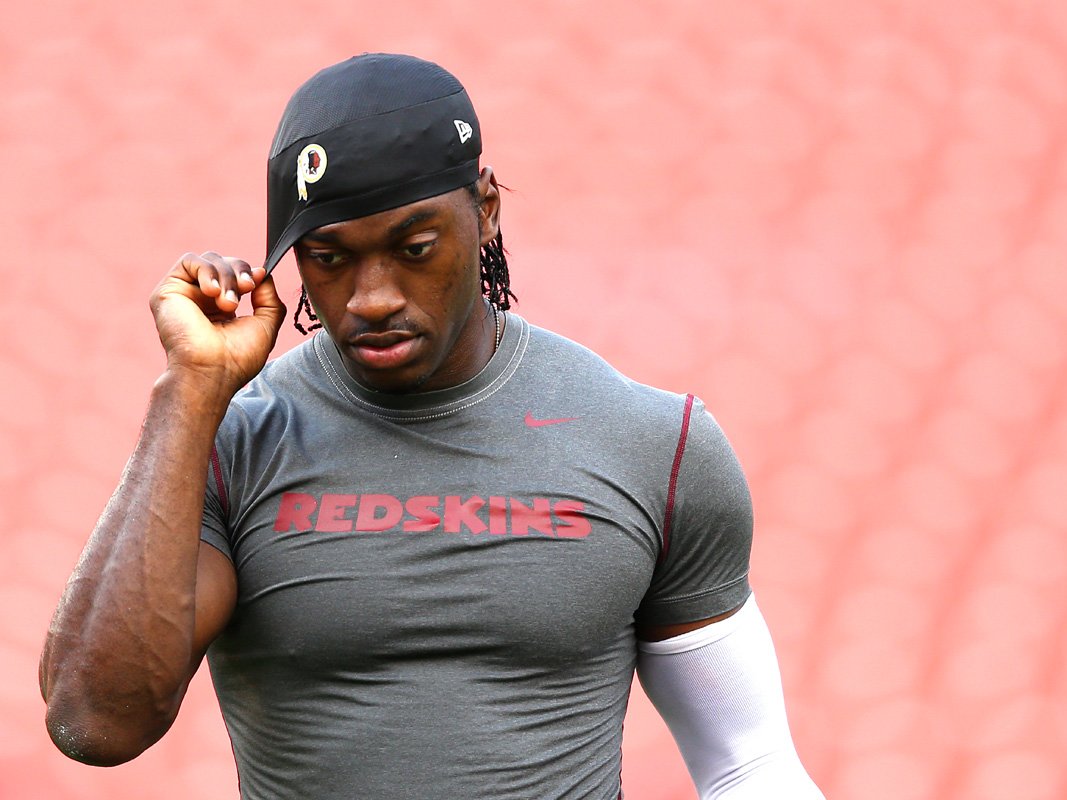 Patrick Smith/GettyRobert Griffin III’s future with the Redskins is in doubt.

The Washington Redskins had their season end Sunday night in a 35-18 Wild Card loss to the Green Bay Packers.

On Monday, players were cleaning out their lockers as they headed into the offseason.

Robert Griffin III was among them, perhaps for the last time.

Griffin’s future is very much unknown as he heads into the offseason. Last summer, the Redskins picked up Griffin’s $15 million option for 2016, but they then benched him this season. They couldn’t find anyone to trade for him during the season, and now he figures to be on another team next year, whether the Redskins cut him or find a team willing to take his deal, now that the remaining money is no longer in danger of becoming guaranteed because of an injury.

So if this is indeed the last time Griffin shows up to the Redskins’ home locker room, he decided to leave the team a message as he departed. NBC Sports reporter Carol Maloney tweeted a picture of the only things remaining at Griffin’s locker.

The top passage is from the Bible, the full quote saying, “I can do all things through Christ who strengthens me.”

The bottom passage is credited to Mother Teresa and reads:

People are often unreasonable, irrational, and self-centered. Forgive them anyway. If you are kind, people may accuse you of selfish, ulterior motives. Be kind anyway. If you are successful, you will win some unfaithful friends and some genuine enemies. Succeed anyway. If you are honest and sincere, people may deceive you. Be honest and sincere anyway. What you spend years creating, others could destroy overnight. Create anyway. If you find serenity and happiness, some may be jealous. Be happy anyway. The good you do today, will often be forgotten. Do good anyway. Give the best you have, and it will never be enough. Give your best anyway. In the final analysis, it is between you and God. It was never between you and them anyway.”

Master Tesfatsion of The Washington Post also tweeted some photos of Griffin cleaning out his locker, noting Griffin wouldn’t speak to media on Monday.

RGIII cleaning out his locker for the last time at #Redskins Park. pic.twitter.com/itTqriMAlc

The next step for Griffin is very much unknown. Again, finding a trade partner might be difficult; however, teams looking for a quarterback might be willing to gamble on Griffin, particularly after he sat out a year — he’s at least healthy.

If he gets cut, there will undoubtedly be some interested teams. Griffin struggled after his rookie year, but he’s just 25 and could prove effective in a system that’s better suited toward his talents.

Regardless, Griffin sounds like a player who believes he’s on his way out of town.