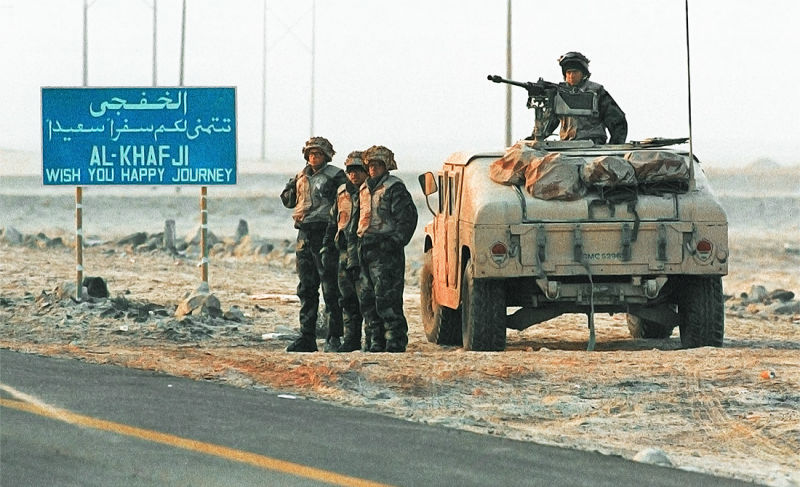 When most people think about Desert Storm, they probably imagine Saddam and his forces being contained and battered from the sky before being conquered in a 100 hour ground offensive. Yet the Battle of Khafji was the only instance Iraqi ground forces attempted to land a meaningful blow on the coalition on its own turf, and it succeeded—just before failing miserably.

Saddam’s forces had tried to bait coalition forces into ground engagements for two weeks since the air component of Operation Desert Storm kicked off on January 17, 1990. Iraqi artillery operating along the southern Kuwaiti border had shelled coalition positions in Saudi Arabia for days and SCUD missiles had been launched—not just at the coalition, but at Israel, in an attempt to fracture the coalition by baiting a Israeli military response.

That is not to say that Iraqi forces along the Kuwaiti border with Saudi Arabia were faring well; far from it. Observation posts along the border called in constant air strikes of targets within visual range of forward air controllers stationed there.

On January 27th, after 10 days of being pounded by air strikes and largely blinded command and control-wise, Hussein traveled to the Iraqi port city of al Basra to meet with some of his generals that commanded forces in Iraqi-held Kuwait. Hussein demanded a response to what had been an almost entirely lopsided pummeling from the air by the coalition.

This response would come in a tactically bankrupt assault by Iraq’s already heavily degraded armor forces. They would push 10 miles south of the border into Saudi Arabia, to the seaside port town of Khafji. It was a bold plan, one based on arrogance and the need for positive propaganda more than military strategy.

On an interesting side note, during Hussein’s trip back to Baghdad following the meeting, his convoy came under coalition air attack, although he survived the onslaught and made it back to Baghdad safely. (One can only wonder how history would have changed if that strike had taken the “Butcher of Baghdad” out for good.)

The next day, on the 28th, it seemed apparent that Iraqi forces were going to make a move south. Observation posts along the border reported drastically increased Iraqi reconnaissance activity and the USAF’s still experimental E-8 Joint Surveillance Target Attack Radar System (J-STARS), a Boeing 707 with a large canoe shaped radar that can detect and track enemy ground movements, reported that a column of Iraqi armor was headed south towards the border. Even maps showing the outposts along the border as part of an Iraqi attack plan were seized.

These warnings were not heeded by Central Command, and at the time, the Combined Air Operations Center was focused on running its war plan. Additionally, the idea of Hussein’s forces attacking across the border was unexpected, to say the least, because such a move would have little strategic value. By that point in the war and it would be akin to a suicide mission.

What would become known as the Battle of Khafji would begin the night of Jan. 29. More than 2,000 Iraqi soldiers, supported by hundreds of tanks, armored personnel carriers and other combat vehicles began their final dash south towards the Saudi Border. U.S. Marines manning observation posts along the border saw the huge columns of armor heading their way through their night vision systems and tried to get rapid support to strike the force before they were overrun.

By 10:30 p.m., some of the observation posts came under heavy Iraqi fire. Although the units manning the outposts fired back, it did little against the crushing armor onslaught. This engagement would mark the first direct ground combat of Desert Storm, and it would occur weeks before the official ground assault was kicked off.

The documentary below, which is one of the best I have seen about any Desert Storm topic, explains Battle of Khafji far better than I could here. It is largely in the words of those who were there to witness it, including a heroic six-man Marine reconnaissance team that was left behind in the besieged city. From their perch inside enemy-seized territory they would direct a storm of destruction onto the unsuspecting Iraqi forces below.

The battle was not without a serious cost to the coalition. In total, 25 Americans were killed, 14 of whom died aboard a AC-130 gunship struck by an Iraqi SAM. Eleven others were killed by friendly fire. Beyond that, two were wounded and two were captured. In all, there were 43 coalition deaths and 52 injuries associated with the battle. Yet the Iraqis fared far worse.

The battle stands as a lesson on two levels. One is how effective integrated air and artillery support can be; the other is how it is easy to underestimate your enemy’s irrationality and crooked goals. Hussein used the battle of Khafji as a major propaganda tool, even though it was a massive loss and had little strategic value or prospects for a positive end-game in the first place.

On the coalition side, the whole battle could have been avoided if commanders listened to the real-time reports from surveillance assets in the field, no matter how illogical they may have sounded at the time. The hyper-focus on a set war plan and overconfidence were distracting factors.

The incident also showed just how much damage a single, well-placed and brave team trained in forward air control could do against an overwhelmingly larger force. We would see this concept become the cornerstone of the Afghanistan invasion strategy and it has now become an integral part of standard warfare as we know it today.