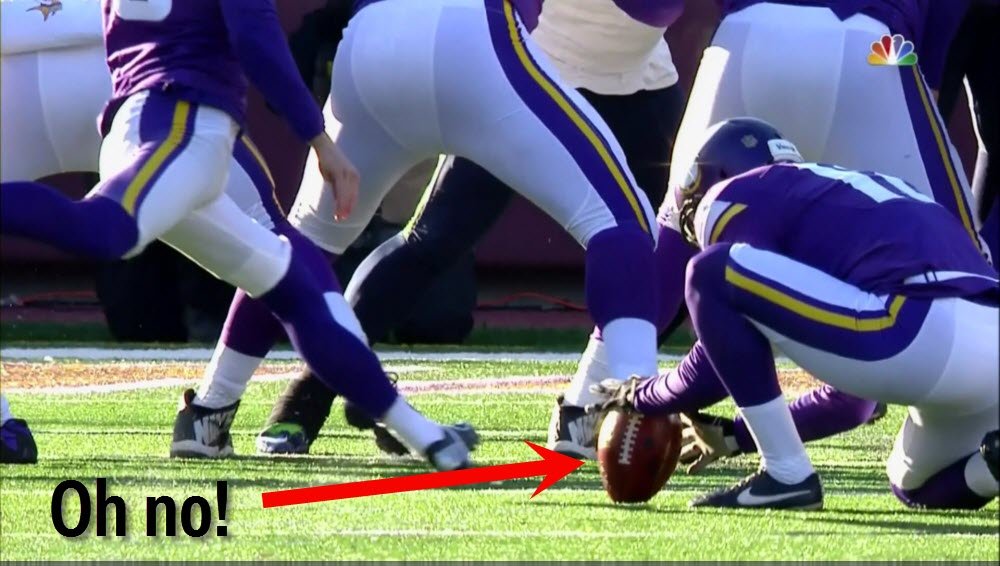 Vikings kicker Blair Walsh missed a potential game-winning field goal with 26 seconds left in the 4th quarter of Minnesota’s wild card game against Seattle, shanking the 27-yarder left of the goal posts to give Seattle an improbable 10-9 win.

In a freezing game that saw the Vikings control the pace and take a 9-0 lead into the 4th quarter, the Seahawks rallied late behind Russell Wilson’s exceptional play and a key Adrian Peterson turnover to take a 10-9 lead down the stretch.

But with under two minutes to play Teddy Bridgewater drove the Vikings into the red zone to set up what would have been the game-winning field goal. Walsh had previously nailed three 40-plus yard field goals earlier in the game, and it was all but certain that he’d make this comparative chip shot.

But this is the playoffs, and crazy things happen every week in the playoffs. This is as crazy as anything we’ve seen in years — and the laces on Walsh’s kick weren’t out!

And look: the laces were in!

Michael Bennett couldn’t believe it and thanked the heavens:

The Seahawks will play the Panthers next week in Carolina. The Vikings and their fans, meanwhile, won’t forget this one for a long, long time.