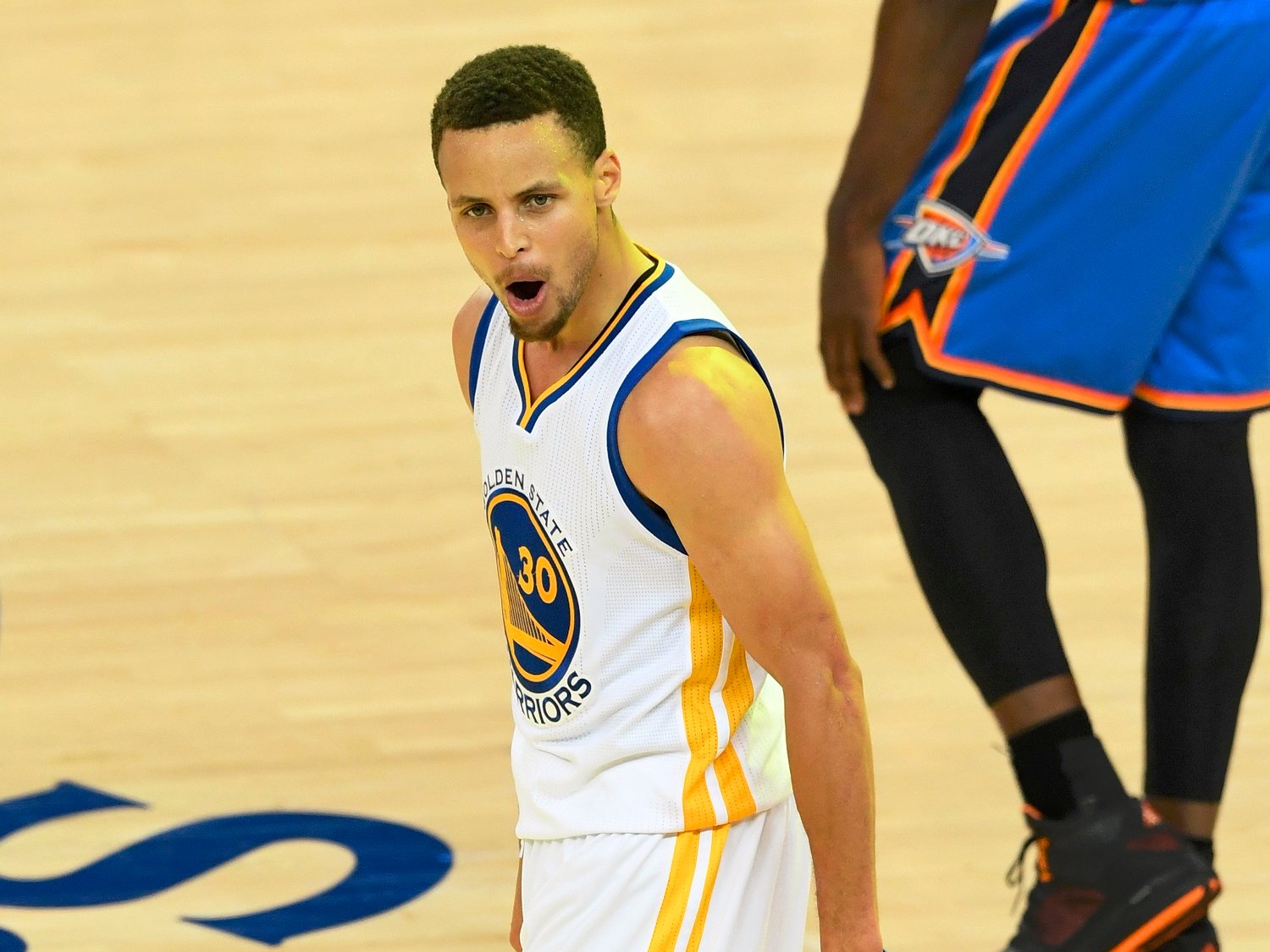 The Golden State Warriors kept their season alive Thursday night, winning Game 5 over the Oklahoma City Thunder to move the series to 3-2.

The Warriors were sparked by several big performances, none more important than Stephen Curry’s resurgence, as he scored 31 points on 9-20 shooting to go with seven rebounds, six assists, and five steals.

Coming into the game, much of the focus was on Curry’s knee, which was reportedly just “70 percent at best” as he makes his way back from a sprained MCL.

Curry and Warriors coach Steve Kerr both denied that he was still injured, though there was evidence to prove otherwise, like his poor shooting and lack of explosiveness. Kerr suggested Curry was still trying to get his rhythm back after missing two weeks because of the injury.

In Game 5, Curry may have lent some credence to that theory by making a key adjustment to his game. In the Western Conference Finals, Curry had been shooting just 37% from three, a far cry from his normal accuracy. Those pull-up-threes from absurd ranges that we’ve become so accustomed to seeing from Curry were missing, and he was struggling to make the Thunder defense pay for switching big men onto him.

So in Game 5, Curry seemed to scrap those shots; he decided to take it to the rim.

Curry has improved quite dramatically as a finisher, despite not being a high-flying, explosive guard like Russell Westbrook. Though Curry had noticeably been missing shots at the rim and in the paint this series, he continued to attack with reckless abandon in Game 5, and it provided the Warriors with a much-needed scoring punch.

In total, Curry went 5-9 at the rim, with his other four makes coming from the perimeter. In the fourth quarter, with the Thunder hanging around, Curry was basket-bound, coming up with several pivotal shots down the stretch.

What’s important about these shots is that Curry had no trouble getting to the rim each time. Being able to penetrate off the dribble and get into the paint is a valued skill in the NBA because it’s difficult — Curry was doing it with ease.

This would seem to suggest that Curry’s problem is more related to his rhythm than his knee. A player with a balky knee would presumably rather settle for jump shots than have to use that knee to evade a defender and take it to the basket where they must elevate and finish, knowing there’s an increased chance of contract. Additionally, those aforementioned, off-the-dribble, signature threes from Curry were largely missing in Game 5. Of his eight attempts from three-point range, only two of them were off the dribble, as Curry instead opted for attempts straight off the catch.

This was obviously part of the game plan for the Warriors. Curry said after the game that the Thunder’s tendency to switch on defense (often putting a bigger, slower defender on Curry) is tempting to then launch a three-pointer.

“The ones where they get you in trouble is where you iso and do eight dribbles and change direction and try to still search for that three,” Curry said, “That’s the one that is tempting and you kind of have to feel moment whether you’re going to take them or not. But those are the ones that get you in trouble if you play right into their hands.”

If Curry’s knee is indeed okay, then each game he plays is an opportunity for him to regain that rhythm that’s so crucial to his game. The Warriors will face a monumental challenge trying to win Game 6 on the road in Oklahoma City, but they have to feel good knowing Curry seems to have found his rhythm and an attack that worked in Game 5.