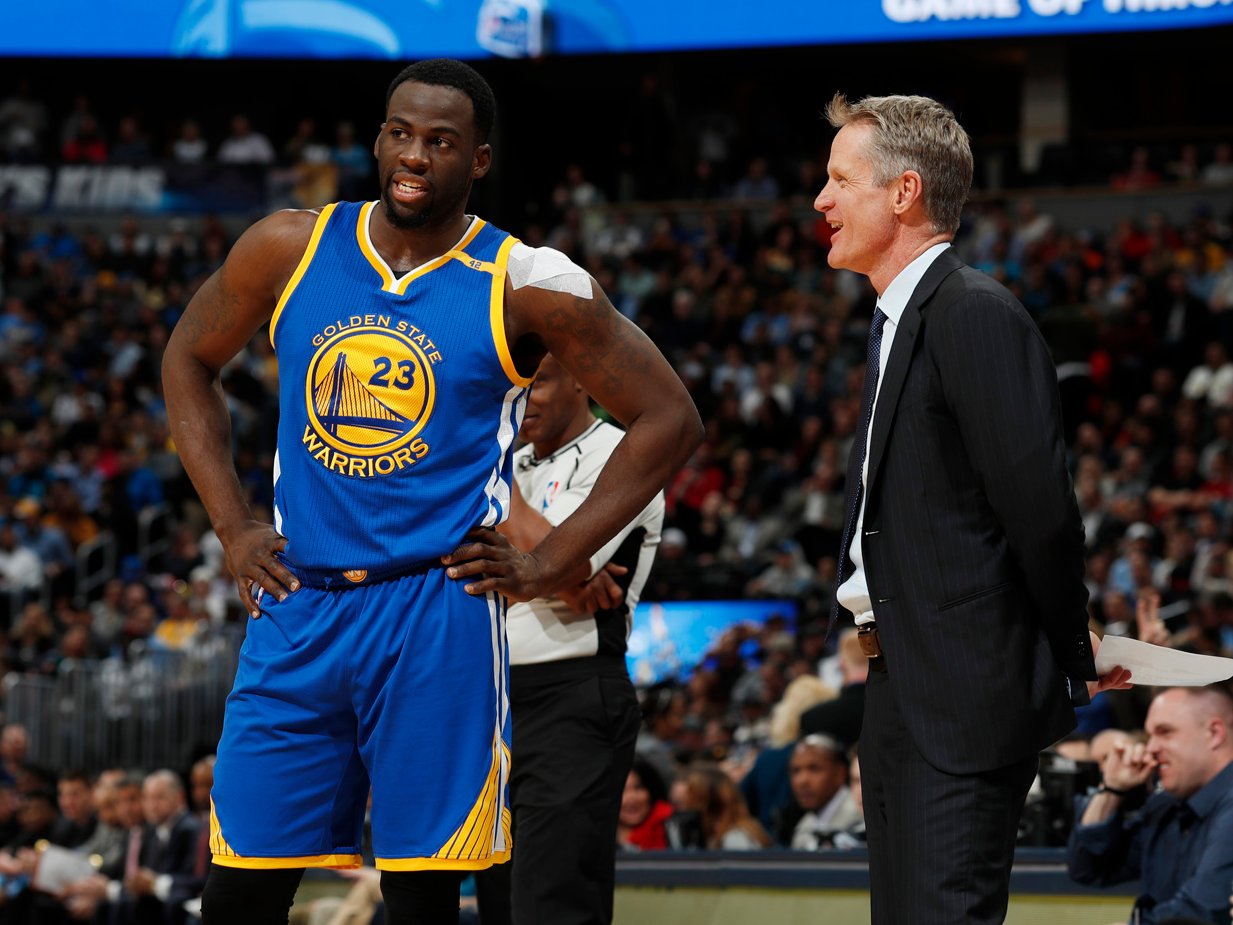 Though the Golden State Warriors could roll the ball out without a game plan against most teams in the NBA and still win on most nights, Kerr’s challenge is keeping his numerous stars and role players happy and in line.

Perhaps no player is more challenging in that regard than Draymond Green.

Green is the engine that makes the Warriors go, but as Sports Illustrated’s Chris Ballard notes in his breakdown of Kerr’s leadership philosophies, Green is also the most “volatile” of the Warriors stars. Green and Kerr have clashed before, and at times, Kerr’s biggest challenge is striking the fine line between keeping Green on edge without sending him off the rails.

According to Ballard, one of Kerr’s favorite tactics is to yell the same thing at Green every time he attempts a three-pointer: “Hell no!” Green, a career 33% three-point shooter, obviously doesn’t have the same green light as Stephen Curry, Klay Thompson, or Kevin Durant. But Kerr also knows that by diminishing Green, he’s creating a more positive result.

“‘He knows yelling that turns on something inside of me,’ says Green. ‘If he just said, ‘Don’t shoot that shot, it’s not right for us,’ it wouldn’t work.’ (Kerr says his goal is to motivate Green because, as he explains in an email, ‘he thrives on people telling him he can’t do things, so I yell that partly as a joke and partly because I think it will motivate him. He’s at his best with a chip on his shoulder and I’m trying to keep it there.’)

“So, where does that leave the two? ‘We’re as close as anybody on the team,’ Green says of his relationship with Kerr. ‘I mean, I can talk to Steve about anything,’ he says. ‘We can go at each other and know it’s never personal.'”

Green also recalled a game when the Warriors blew a lead to the New Orleans Pelicans, in part because Curry and Thompson took some questionable shots. During a timeout, however, Kerr abruptly yelled at Green and questioned what he was doing on the floor. The tactic? Anger Green and motivate him and he’ll put the others in line.

“I’ve taken like one shot and have like, no turnovers. But [Steve] looks right at me and goes, ‘What the f— is wrong with you? Get your f—— head in the game!'”

“But he’s smart because he knows exactly what I’m going to do. I’m gonna get mad and then I’m going to yell at everyone else and get them going. Now is that a tactic? Is it on purpose? I don’t know. It doesn’t matter. It’s coaching is what it is. That’s coaching. Sometimes I sit there afterward and think, ‘Damn, that motherf—– got me.'”

Green added, “He has a feel for it. That’s his thing. He has this feel for exactly what each player needs.”

While Kerr is out with a back ailment stemming from surgery two years ago, the Warriors have gotten along just fine, going 10-0 this postseason, currently with a 2-0 lead on the San Antonio Spurs in the Western Conference Finals. However, Kerr’s fingerprints are all over the team, as he continues to manage from afar, communicating things to interim coach Mike Brown.

The Warriors might look fine without Kerr, but part of that is because Kerr has already figured out the ingredients to keep every player in line.

SEE ALSO:The Celtics’ infamous blockbuster trade with the Nets 4 years ago is still paying off today