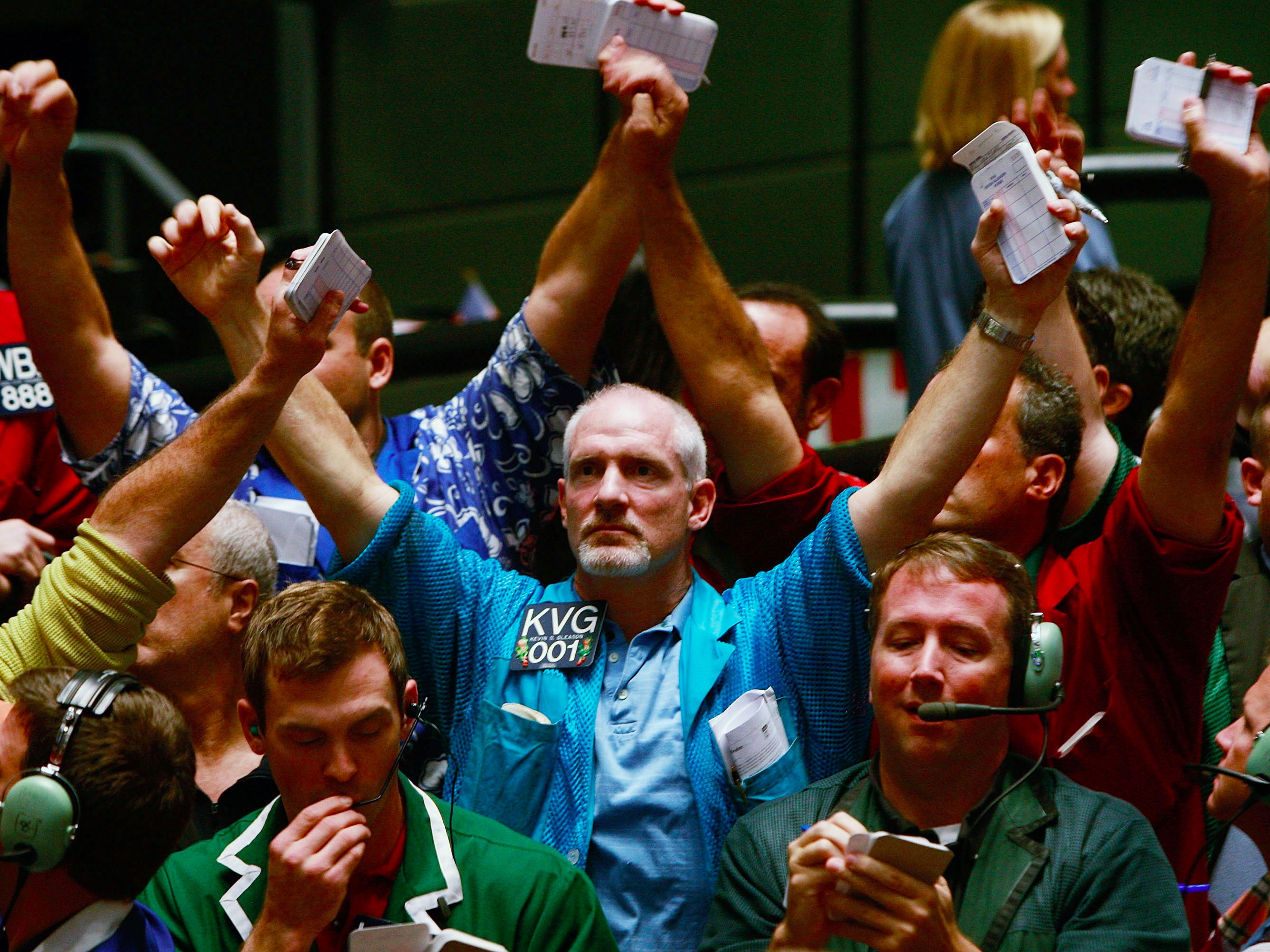 Stocks rallied on Friday to cap a strong week for the markets that saw the Dow and benchmark S&P 500 indexes move back into positive territory for the year.

On Friday, Business Insider’s Akin Oyedele released our latest compendium of charts from some of the sharpest strategists and commentators on Wall Street.

Some of the highlights included contributions from industry legends like Jack Bogle, Gary Shilling, and David Rosenberg.

A few of the charts that caught my eye were the following one from Bloomberg’s Tom Keene, which showed how log scale charts get completely broken when negative interest rates come into the picture: …and Bespoke Investment Group’s chart, which highlighted the absolute dearth of investment seen since the financial crisis. It was a busy week for US economic data that ended on a quiet note with only the preliminary March reading on consumer confidence from the University of Michigan crossing the tape.

The measure came in at 90.0, worse than the 92.2 that was expected and the lowest reading for the index since October. And the big takeaway from the report? Consumers are expecting gas prices to rise.

“Consumer confidence eased in early March due to increased concerns about prospects for the economy as well as the expectation that gas prices would inch upward during the year ahead,” said Richard Curtin, chief economist for the survey said.

Elsewhere in the economy, late Thursday we wrote about some of the dynamics still present in the labor market, which has been the strongest part of the economy over the last several years.

Job gains have been stellar. But wage growth has lagged, and the most recent report out on Thursday showing the number of jobs open indicates that there’s still something malfunctioning inside the economy given the gap between how many jobs are open and what the unemployment rate is. Were the labor market truly tight, we’d expect the unemployment to be lower given the number of jobs available.

Headline wage gains have disappointed, but recent inflation data indicate that the tide has shifted in the economy where the formerly low-flation dynamic the Federal Reserve sought so actively to reverse has given way to a clear upward trend in prices.

In a note to clients Friday, Ethan Harris at Bank of America Merrill Lynch wrote that this makes the Fed’s inflation forecasts “stale,” adding that “rising inflation is no longer a forecast.” According to a Bloomberg report out late Thursday, Mike Pearson, the CEO of embattled pharmaceutical company Valeant, said in a memo to staff the the company, well, isn’t going to file for bankruptcy anytime soon.

Shares of the company fell 51% on Tuesday after the company cut its guidance and said it risked slipping into default if its annual report isn’t filed within 60 days. A separate Bloomberg report out Friday said Valeant had reached out to its lenders to see what it would need to do in order to avoid falling into default on some of its debts.

But a note that caught our eye hit the inbox early Friday from the folks over at Strategas Research Partners.

Jason DeSena Trennert at Strategas drew a comparison that has been made before: Valeant looks a lot like some of the conglomerates of the 1960s. But it isn’t just Valeant that seems to be following this playbook.

Trennert highlighted a number of other companies that have embraced and marketed their “platform” model in recent years that sees them acquire smaller rivals and, eventually, roll the whole thing up into a bigger and, presumably, more profitable unit.

“We don’t mean to pile on here. As strategists and economists we know nothing about [Valeant] and its prospects,” Trennert wrote in a note Friday.

Still, as students of financial history, we think it’s worth bearing in mind that the conglomerates of yesteryear bear some passing resemblance to today’s “platform” companies. Presenting at a Grant’s Interest Rate Observer Conference last fall, JHL Capital Group presented a list of stocks with a similar business model trading at lofty valuations… Some of the companies look expensive. The potential for wider corporate credit spreads, heavier regulatory scrutiny, and discretion might suggest that Valeant’s recent troubles should lead investors to take a closer look at companies growing through serial acquisition

Among the names in the “Platform Boom Index” — which has significantly outperformed the S&P 500 since January 2008 — are Spectrum Brands, Platform Specialty, TransDigm, and Post Holdings.

All of these companies have more than 30% of their outstanding stock owned by hedge funds.

His post is a great summary of what investors have been worried about, what central banks have done, and why negative rates in the US are perhaps a bit further off than some in markets might think.

The anxiety about negative interest rates seen recently in the media and in markets seems to me to be overdone. Logically, when short-term rates have been cut to zero, modestly negative rates seem a natural continuation; there is no clear discontinuity in the economic and financial effects of, say, a 0.1 percent interest rate and a -0.1 percent rate.

Moreover, a negative interest rate on bank reserves does not imply that the most economically relevant rates, like mortgage rates or corporate borrowing rates, would be negative; in the US, they almost certainly would not be. Negative rates have some costs, in their effects on money market funds for example, but these ought to be manageable.

On the other hand, the potential benefits of negative rates are limited, because rates that are too negative would trigger hoarding of currency. Although the European experience suggests that rates can be more negative than the Fed staff estimated in 2010, I don’t think U.S. rates could approach the extreme values seen in Switzerland or Sweden without becoming counterproductive.

My view is that the Federal Reserve would likely move to a major quantitative easing program before it even considered negative interest rates, given the likely moral outrage from lawmakers at the idea the central bank would charge institutions parking money in their system.

Never mind that consumers would be very unlikely to see outright charges on their savings or savings accounts implemented — take cash out of non-network ATMs or go get a certified check and you’ll see all the little ways you actually are charged for keeping your money in a bank already — or that lawmakers tried to imply last month that the Federal Reserve subsidizes large US banks because it pays a negligible fee on excess reserves.

Much digital ink has been spilled over negative interest rates in the last month.

But the effects of monetary policy we’ve seen around the world over the last few years make clear, in my view, that the interest rate channel is a far less potent way for central banks to accomplish their goals.

Said another way, if you want to encourage markets to take more risk you’ve got to be in market: controlling the price of money doesn’t have the same kind of juice.

The most important charts in the world.

A British mathematician just won a $700,000 prize for solving this fascinating centuries-old math problem 22 year ago.

Janus is launching an ‘Obesity ETF’.

7 maps that explain US strategy.

NOW WATCH: IAN BREMMER: This is why the world isn’t concerned at all about a President Trump