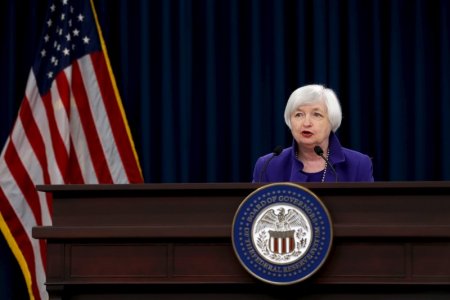 WASHINGTON (Reuters) – An acceleration in U.S. wage growth reinforces the Federal Reserve’s view that inflation is poised to rebound and could lead the central bank to raise rates more this year than many investors expect.

While average hourly earnings were flat in December, they were sharply higher than a year earlier and rose at a 2.5 percent annual rate in the fourth quarter, according to Reuters calculations of Labor Department data released on Friday.

Wage growth remains tepid compared to before the 2007-09 recession, but an upward trend is now more clearly coming into view, supporting the outlook within the Fed that four quarter-point rate hikes could be needed this year.

The average hourly wage rose 2.2 percent in 2015, up from 2.1 percent the prior two years and 1.9 percent in 2012. Wage growth was particularly strong in the second half of 2015, which could increase confidence the persistently low inflation could rise toward the Fed’s 2 percent target this year.

Also boosting the case for raising rates, Friday’s data showed U.S. job growth accelerated in the fourth quarter despite trouble in manufacturing caused by a weak global economy, while more workers flooded into the workforce and the jobless rate held at a 7-1/2 year low at 5 percent.

“With the Fed feeling confirmed in its baseline scenario, the next rate increase is only a matter of time. We expect the Fed to move at the March meeting,” said Commerzbank economist Christoph Balz.

Investors had been doubting the Fed’s resolve to raise interest rates, betting on fewer increases this year. But signs of strength in the U.S. economy is changing that view.

Prices for futures tied to the Fed’s benchmark rate suggest investors now see a 52 percent chance of a hike in March, up from about 44 percent a day before the employment data was released. Raising rates in the first quarter would make four increases over the course of the year more plausible.

The Fed last month raised rates by a quarter point from near zero, the first increase in a decade.

Fed chair Janet Yellen has warned that if data suggests inflation and employment will rise more quickly than policymakers expect, the central bank could be more aggressive at raising rates. Friday’s data gave signs of strength on both fronts.

“People are finding jobs and getting paid more for them,” she said. “Better employment growth means the Fed will raise rates faster.”