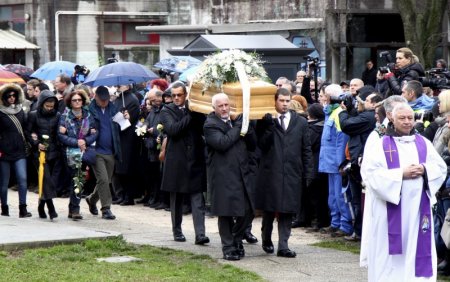 Thomson ReutersThe coffin of Italian student Giulio Regeni is carried during his funeral in Fiumicello, Italy

ROME (Reuters) – An Italian student who was tortured and found dead in Egypt last week was given a funeral in his hometown on Friday and Italy’s prime minister once again insisted that those responsible be caught and punished.

Crowds of mourners attended the funeral in Fiumicello, northern Italy, for Giulio Regeni, 28, whose body was found half-naked by a road in Cairo.

The service was held in a municipal gym after Regeni’s family declined a state funeral, Italian media said.

Italy has sent investigators to work with Egyptian authorities in an effort to establish what happened to Regeni.

His doctoral work at the University of Cambridge into independent Egyptian unions and his articles criticizing the government have prompted speculation he was killed by Egyptian security services.

Egypt has vehemently rejected the suggestion.

Italian Prime Minister Matteo Renzi said on Friday he had asked for Italian agents to be part of the investigation to make sure the people responsible were punished.

“We have told the Egyptians that friendship is a precious thing and is only possible if there is truth,” Renzi said in a radio interview on state broadcaster RAI.

Rights groups say Egyptians are often detained by police on little evidence and beaten or coerced. Scores have disappeared since 2013. Egypt denies allegations of police brutality.