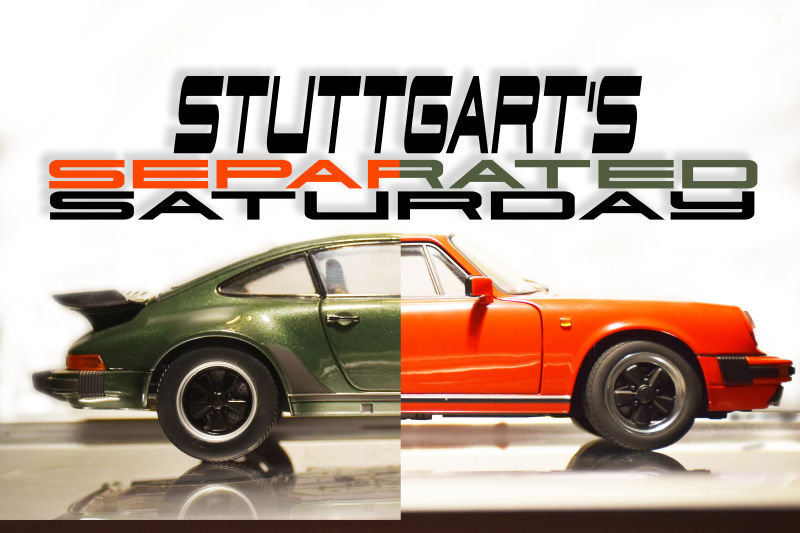 Two cars that are ostensibly the same -yet very very divergent to the discerning enthusiast. Two diecast manufacturers that aim to faithfully recreate these two legends-in-their-own-rights, and in some ways they succeed in accomplishing this is very different way. On this Saturday, shall we compare these two 1/18s? Presenting two cars separated simultaneously by everything and nothing: the Norev 1977 Porsche 3.3 930 Turbo and the AutoArt 1988 Porsche Carerra 3.2.

(Jobjoris, if you’re in Belgium… put your phone down.)

The Porsche Turbo is an absolute legend. Porsche introduced the turbocharged way of life to the 911 platform in 1974 as a way to homologate what would become one of the most venerated racing machines of all time; the boost-consuming 935. It became such a radical departure from the ‘regular’ 911 that Porsche designated the car with the wholly-new serial code, 930, that we enthusiasts now use to refer to this unwieldy beast. We also sometimes use the term Widowmaker.

That mesmerizingly large rubber tipped spoiler, known as the ‘Whale Tail’ is the largest giveaway that this is car is not your average 911. In 1975, when the car debuted, this unit was a thinner piece with a lower profile and not much side-area to speak of. In 1977, for the 1978 model year, the 930 gained displacement to 3.3 liters, a bonafide 300 crank HP, and an air-to-air intercooler, so the spoiler was raised and increased to make room for the snail’s snorkel.

Not a lot to see in here, Norev did a decent job of translating what is under that all-obfuscating intercooler, which is not much to begin with. We get details of separate components in the engine bay, a detailed intercooler, and orange colored wires here and there. However at the price-point these live in, one might expect more, such as more color-corrected ancillaries on the motor and firewall, maybe some warning stickers, like we all know the AutoArt will have. Lets have a look in there as best we can.

As is the case with most 911 engines while they are still in the car, the majority of eye-candy is available from underneath. Again, I’d love to see some more.

Under the front… there is not a lot to see.

Under the hood (FRUNK!), we find a nice expanse of flocking, and not much beside. Even though the matte black bumper components are a little flat, and the accordions in the bumper shouldn’t be the same piece as the bumper strip, the exterior of the car is decently detailed. The paint is very subtle, which is hard to accomplish with metallic paints on scales this small, even if it is applied a little heavily in the creases on the body. The decal for the Porsche crest on the outside is very nicely detailed, and sits amazingly well on the metallic green.

The interior was always supposed to be lavish and utterly complete when is comes to a 930; these were meant to be the absolute range-topping model.

From the outside, the interior of the 930 seems complete, even if some of the painted-on details arent always 100% within the confines of the part they are meant to represent. We get an array of seatbelts and marked switches and flocked carpeting to keep our eyes pleased. Open the doors and look inside? Sure!

The Porsche logo on the steering wheel is a great touch, though it just looks off a little bit, as if the mold was too big compared to the steering wheel. The rest of the dash is amazingly legible, and the center-console mounted tape holder is an awesome touch of 70s and 80s nostalgia. All the moldings looks to be to a nice scale, and complete a nice interior on this nice model from Norev.

All in all my verdict on the Norev 930 is that these are great if you can snap them up for a fair bit less that an AutoArt 930. Why do I think the AutoArt would be better? Glad you asked…

The classic Fuchs alloy wheels are a must for this generation of 911.

The incomparable slope of the rear bodywork is even more unbelievable when you realize that this car has two decently-sized rear seats! Also note the detail in the lower body. Jacking points on a diecast? Sure, why not.

While this view shows off the detailed corner lenses and those great wing mirrors, it also shows one of the very few flaws on this model….

Using a photo I took (of a 930), and the patent-pending CSI:LaLD Super Zoom Mode, we can see that the ‘accordions’ encompass the entire diameter of the bumper; they go all the way around.

Using the copywritten CSI:LaLD Super Zoom Mode™ once again, the AutoArt reveals what looks like bad casting. Though my eyes could be deceiving me…

On a lighter note, my absolute favorite feature on this car? That would be this particular combination of door handle and wing mirror. The creases and separations on that mirror are stunningly accurate to the real-life variant, and the door handle looks like you could stick the worlds tiniest set of keys in there.

You’ve got to love those little touches.

Under there is the 3.2 liter flat six engine somewhere. Note the bumper accordions.

We all knew AutoArt would do the admittedly barren engine bay of an aircooled 911 justice. just look at those stickers and logos, the color-correct ancillaries and even the weather stripping on the closures. wow.

Again, from underneath we get a better view of the engine of a classic 911 (though this one doesn’t disappoint from up-top) and in this case, the delicatessen of this car: the G50 gearbox. There is more detail here that on the Norev, with multiple parts and color-correct details thoughout. The suspension and tire thread also pop out on this model, from this angle, on both ends of the car.

Fun Fact: AutoArt decided to add the most adorable little horn under the front bumper. Bezaubernd!

Back up-top, the hyper detailed light lenses on both headlights and foglights come into focus, as does a glimpse of the famous Stuttgart-emblazoned hood crest.

Up close the details seem a little off, but the raised piece looks impeccable from anything but very up close.

I have to point out the hood vent and it’s great mesh trim, and the detail on the windshield wipers.

The AutoArt looks almost orange in some of these photos, and it does that trick in real life as well. The paint is a very nice level on this model; applied liberally and without high or heavy spots. It is also my favorite Porsche color: Guards Red, and using an AutoArt 1/18 Porsche 928 and a 1:1 Porsche 928s, I can vouch for this and say that it matches a 1:1 Guards Red car perfectly in every light!

The interior is top-notch. Absolutely stellar achievement, making this interior this good looking. Ok, I’m gushing. Let’s look at some close-ups and let the pictures show you what’s so nice in here.

The AutoArt is the better model, and I’d sell the Norev to buy an AutoArt 930 anyday. Sorry Norev, that’s just the way it goes.

Why? Well the AutoArt has all-around better execution of the minute details that make a diecast car -in my humble opinion- worthy of the fairly large price tag that both of these models currently carry. It almost seems like the Norev is of a later generation of 911, that looks exactly the same but has to comply with new safety regulations and therefore has larger fenders and headlights and such. But even if that bizare scenario was the case, the Norev is meant to be the older model, and Porsche didn’t change the body on the cars through those years, just added stuff.

Seeing the two next to one another, it is possible that one of the two is off-scale just a little, and it seems that the Norev is just a little too chunky in its lines and details, where the AutoArt better conveys the sleek and lithe nature of an early 911. It isn’t terrible by any means, just don’t display them next to each other because they make one another look like they are separated by more than a few years and some wide fenders and a wing.

The Norev is a nice model and has some high points as well as some low points. The AutoArt is just an exceedingly charming model indeed.