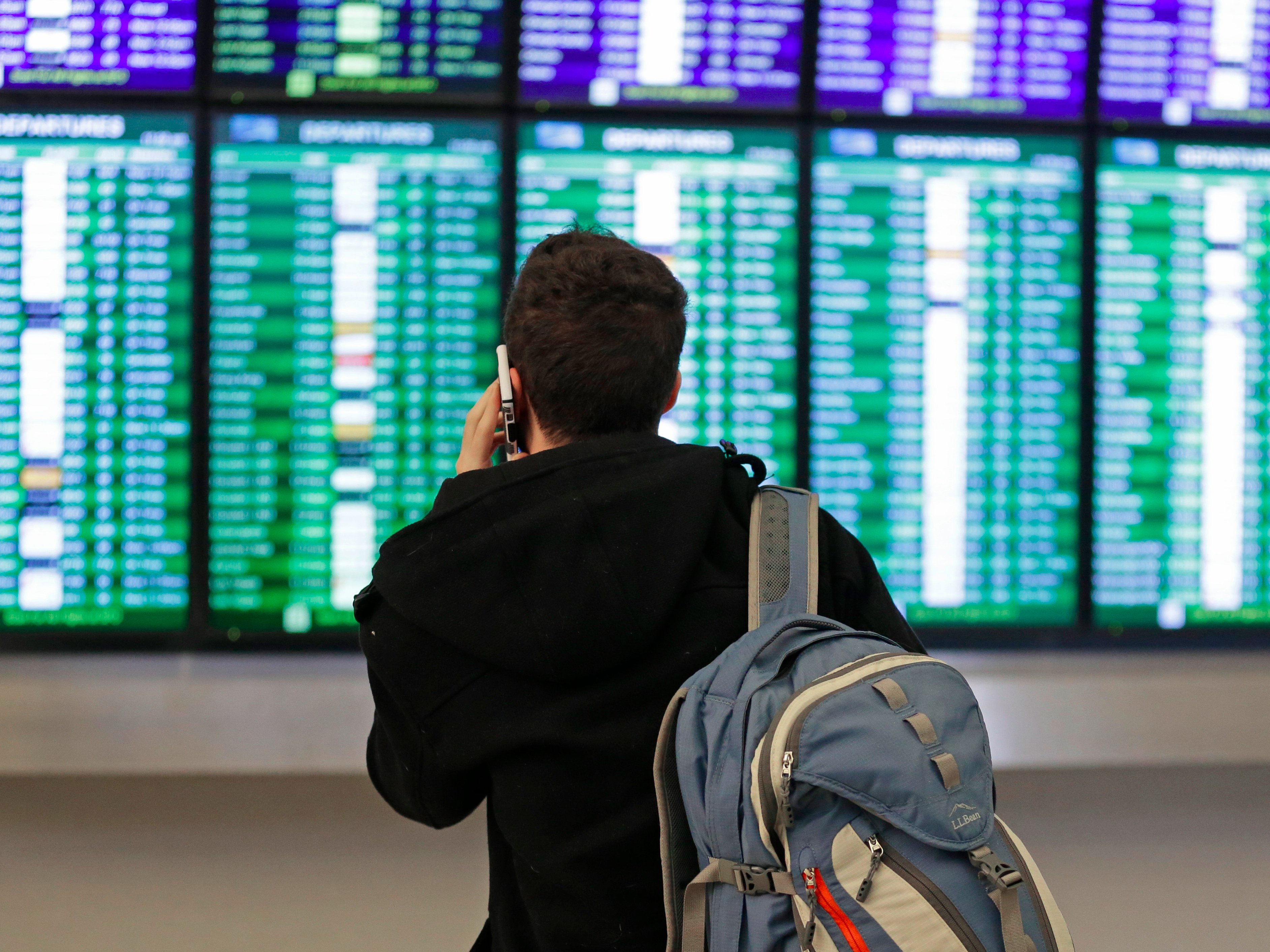 More than 10,000 flights have been canceled this weekend — this is what you need to know

With more than 10,000 flights canceled this weekend, winter storm Jonas has wreaked havoc on air travel across the country.

According to Flightaware, more than 3,000 flights were canceled Friday, with 4,500 grounded for Saturday and another 3,000 expected on Sunday.

The area hit hardest is the northeastern portion of the US.

Normally, the airspace between Washington D.C. and New York City is some of the busiest in the world.

On Saturday, the historic winter storm transformed the region into a ghost town.

In a screenshot from the Flightradar24, the airspace above the region shows virtually no activity.

The few aircraft that are in the area are inbound flights from other parts of the US and Canada.

Under normal conditions, the map would be covered in a sea yellow, with planes traveling into, out of, or through the region’s bustling airports.

All major airlines operating in the US have temporarily shuttered their operations between D.C and New York.

United Airlines announced on Friday that it has shut down its major hubs at Washington Dulles and Newark Liberty International Airports. Although the airline said yesterday it intends to resume service on Sunday, no specific timeframes have been set as of this writing. Major international carriers such as Etihad and Emirates have also canceled or significantly delayed their flights into and out of New York and Washington D.C. on Saturday.

“We are closely monitoring the situation,” An Emirates spokesperson told Business Insider in an email. “We apologise for any inconvenience, the safety of our crew and passengers is of the utmost importance.”

New York City Mayor Bill de Blasio indicated at a press conference that he will meet with the Port Authority of New York and New Jersey Saturday night to determine a timeline to reopen JFK, LaGuardia and Newark Liberty.

Here’s your rebooking options if your airline is affected by the storm:

Delta has offered to refund tickets for passengers whose flights are significantly delayed or canceled as a result of the weather. Even if your flight isn’t canceled, passengers traveling into, out of, or through the affected cities listed here may make a one-time change to their ticket free of charge.

To qualify, passengers must be ticketed to travel between the dates of January 22-25 with tickets reissued on or before January 29 for travel no later than January 29.

Click here for the latest information from Delta Air Lines and a list of cities included Delta’s waiver.

Passengers traveling on American Airlines or American Eagle who are scheduled to fly in cities affected by the storm may make a one-time change to their itinerary without having to pay a ticketing fee. To qualify, passengers must be ticketed to fly between January 22-24 with tickets originally purchased before January 21st.

The passengers may switch to a new flight as long as they book in the same class and do not change the destination or origin from their original booking.

Passengers traveling with United Airlines who are affected by the winter storm can switch to a different flight without paying a change fee. Travelers who qualify need to hold tickets dated for January 22-25 into, out of, or though the affected cities listed on United’s website.

For qualifying passengers, the airline will waive the change fee and difference in airfare for new flights departing between now and January 29 as long as the new flights are in the same cabin class and between the same cities in the original ticket.

JetBlue will waive change fees and the difference in airfare for passengers traveling through cities affected by the blizzard. To qualify, customers must be scheduled to travel between January 22-24, with tickets purchased before January 20.

Affected passengers may re-book for travel between January 23 and January 29. Customers who have had their flights canceled may alternatively opt for a refund.

Virgin America will waive the change fees and the difference in airfare for passengers scheduled to travel between January 22-24 within affected cities. Customers have until January 24 to change their travel plans for new flights scheduled for no later than March 10 that are in the same cabin class and between the same cities as the original ticket.

Alternatively, qualifying passengers may cancel their itineraries without incurring a cancellation fee.

Passengers flying on Southwest in cities affected the winter storm may also be eligible to rebook. However, the exact parameters for eligibility vary from city-to-city.

NOW WATCH: Watch 13 hours of superstorm Jonas in one minute