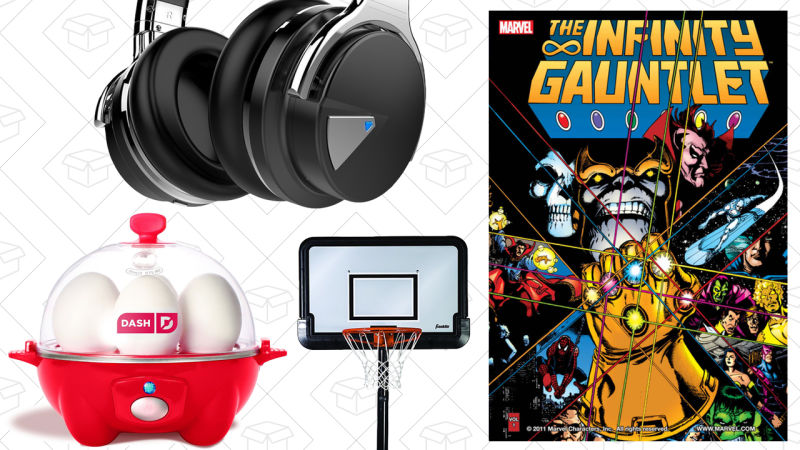 You don’t need to sell a kidney to afford noise-cancelling Bluetooth earbuds; these 4 star-rated Cowin E-7s are just $39 right now, or $31 off with promo code K8WP23JH.

They might not have the brand recognition of Sony or Bose, but these headphones pack in 30 hours of battery life, the ability to use them in wired mode if the battery dies, and yes, active noise cancellation that reviewers say works really well.

It goes without saying that this drone isn’t as easy to fly as a GPS-stabilized DJI, and its camera can be charitably described as a throwback to the 2008 smartphone era. But even so, it looks like a ton of fun to fly (check out the YouTube reviews), and it could be a good stepping stone into the hobby before you go out and spend hundreds on a “real” camera drone.

Seagate’s FireCuda is one of the most popular PS4 replacement hard drives out there, mostly thanks to its built-in 8GB of flash storage that canspeed up loading times, and you can get the 2TB model for an all-time low $90 today.

Even if you don’t feel like cracking open your PS4, you could pop this into an inexpensive enclosure like this one, and use it as an external drive with the PS4’s new firmware.

Anker’s original SoundBuds are your favorite affordable wireless earbuds, but the new SoundBuds Tag just got their biggest discount ever. $26 is $10 less than usual, and beats the previous deal we saw by $2.

The Tags basically appear to be a slightly tweaked version of the SoundBuds Sport, boasting a redesigned remote and better ear tips. Like the Sports though, they’ll still turn off when you connect the two magnetic earpieces together, and turn back on once you pull them apart. Smart.

Anker’s PowerCore Speed 10000 is part of your favorite line of USB battery packs, and you can pick one up on Amazon today for just $27, or about $5 less than usual. Not to be confused with the older PowerCore 10000, this model includes Quick Charge 3.0 (backwards compatible with 2.0), which should feed power into your compatible phone like a firehose.

In what was perhaps the most predictable Co-Op result ever, Anker’s PowerCore line of USB battery…

You also get Anker’s standard 18 month warranty and a nice travel pouch, but the real reason to buy the PowerCore 10000 is its size. If you’ve owned other ~10,000mAh battery packs, you’ll be shocked how small and light this thing is.

Cooking eggs isn’t exactly rocket science, but I’d say the ability to make soft, medium, and hard boiled eggs, plus omlettes and poached eggs at the touch of a button is worth $16. The Dash Go is Amazon’s top-selling egg cooker, and carries a truly stellar 4.5 star review average from nearly 3,000 customers, so get it while it’s on sale for its best price in months.

If you need better furniture to fully enjoy your outdoor space, Amazon’s running a one-day sale on complete patio furniture sets. Everything from sectional couches to bistro sets to complete dining room combos are on sale, but these prices are only available today, or until sold out.

Summer is fast approaching and you’re gonna want to think about how to keep yourself cool sooner rather than later. Going out to get ice cream is a whole thing, so why not make it at home? This $42 frozen yogurt machine from Cuisinart and you won’t have to worry about accidentally overfilling your bowl and spending $10 on a cup of ice cream.

You don’t need a Shop-Vac until you really, really need a Shop-Vac, so prepare for the leaks life throws your way with deals on several different models. You might not use yours for everyday house cleaning, but it’s one of those things that everyone should have in their garage.

If you’ve ever eaten at a nice steakhouse, you were probably eating sous-vide meat. Here’s a secret though: It’s really easy to get those kinds of results yourself, and Amazon here to help with a $109 deal on the Anova Bluetooth sous-vide circulator.

Sous Vide equipment can run you $400 or more, but not Anova. Lifehacker has a great explainer on…

Lifehacker has a great explainer on Sous-Vide cooking for you to check out, but the basic idea is that you seal the food in plastic bags, and then cook it in precisely heated water over a longer period of time. It sounds weird and kind of sterile, but the result is meat that’s cooked to the exact right temperature all the way through.

Sous-Vide 101: How to Cook the Most Tender and Flavorful Meat You’ve Ever Tasted

Mrs. Meyer’s plant-based soap is normally quite a bit more expensive than the competition, but with this 20% Amazon coupon, it’s priced just right. This set includes dish soap, hand soap, and an all-purpose cleaner, in your choice of three scents: Geranium, Lavender, and Basil.

I’m just going to kick off this deal by sharing this product’s Amazon description.

ARE YOU A HAIRY APE?

No problem. Guys feel confident shirtless after using OXA Back Shaver. So, if you have “patchy” or “spotty” patches of hair on your back or body or if you are so hairy that you are often mistaken for being a “hairy ape” there is no job too great for the OXA Back Shaver.

I don’t think back hair is why most men feel uncomfortable shirtless, but I digress.

This product looks very similar to the BaKlade, which we’ve written about before. It doesn’t have many reviews to go off of, but it’s 1/3 the price of the name brand with promo code 9S2F4NB3 so it might be worth checking out if you’re a HAIRY APE.

Another Gizmodo Media Group staff member (who shall remain nameless, but speculate away) bought this last month, and reports that it “does the job.”

The REI Anniversary Sale, the retailer’s biggest sale of the year, is here. Get up to 30% off on an almost overwhelming amount of outdoor gear, from camping, to paddling, to hiking, to cycling, and everything in between. It’ll take some time to sort through everything, so you’d better get started now.

The price of these popular Bowflex adjustable dumbbells has been yo-yoing for weeks, but generally speaking, any time they’ve dipped below $200, they’ve sold out fairly quickly. So if you missed out on the last few opportunities, Amazon’s spotting you another chance today.

If you just want to travel with one grooming tool that can do it all, Remington’s battery-powered PG6025 set includes all of these tools for just $16.

Just note that the 20% coupon on the page won’t be applied until checkout.

Amazon’s running another wide-ranging ebook deal, with prices starting at $2 for novels, memoirs, and even several Marvel graphic novels. Just remember that these prices are only available today, so don’t miss this chance to fill up your digital bookshelves.

It’s officially backyard barbecue season, and you can make your outdoor space a bit more interactive with today’s lawn game Gold Box from Amazon. Inside, you’ll find a bunch of great deals on backyard sporting equipment, including a flag football set, a basketball hoop, soccer goals, and my personal favorite, a pop-up badminton net.

Like all Gold Box deals, these prices are only available today, so don’t miss this chance to show off your athletic prowess to all of your friends and neighbors.

$8 is cheaper than a lot of standard sized mouse pad, but today, that gets you a massive 2.5′ x 1′ model that can accommodate your keyboard as well.

As a compulsive fidgeter, I’ve tried both fidget cubes and fidget spinners, and there’s frankly no comparison; cubes are far superior. Why limit yourself to spinning when you can roll, click, press, flick, and rub, all on one device? There are two different colors available for $5, just note that they have different promo codes.