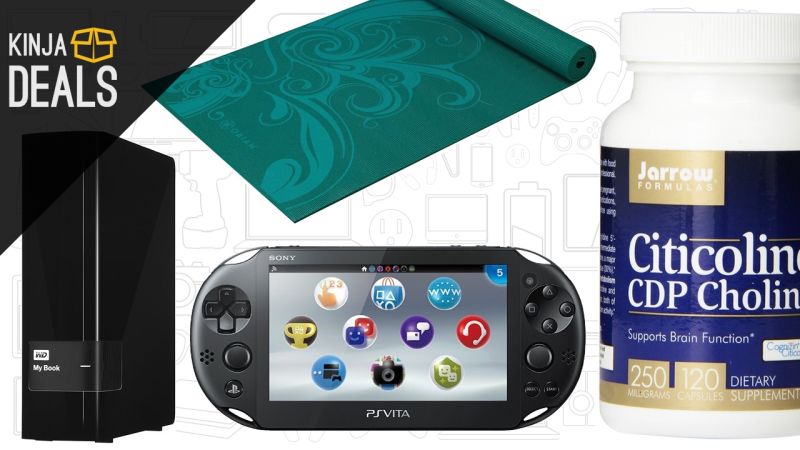 Yoga gear, 4K monitors, and a 5TB hard drive highlight today’s best deals. Bookmark Kinja Deals and follow us on Twitter to never miss a deal. Commerce Content is independent of Editorial and Advertising, and if you buy something through our posts, we may get a small share of the sale. Click hereto learn more.

If you’re planning on taking up yoga in 2016, Amazon’s offering a big sale on select Gaiam accessories, today only. [Gaiam Yoga Basics Sale]

If you’re ready to upgrade your rig to 4K, we’ve got two great deals on popular displays today. The Samsung is cheaper, but the Dell is IPS (and I can tell you from personal experience that it looks fantastic)

Note: The Dell promo gift card is only valid for 90 days.

You can’t control these power outlets with your smartphone, or tie them to IFTTT recipes like the Belkin WeMo line, but they sell for a tiny fraction of the cost of their smarter brethren, and can be controlled from across the room via the included remotes. It’s only a half-measure towards creating a smart home, to be sure, but they might be worth a look at the price. [5-Pack Etekcity Wireless Remote Control Electrical Outlet Switch, $21 with code DEALBIGG]

1365 purchased by readers•Gawker Media may get a commission
$36.98
Buy Now
Amazon

Protein, B-12, milk thistle; no matter what supplements you take, they’re probably on sale today on Amazon. [20% off Select Jarrow Formulas]

The PS Vita might be worth it just for Fallout 4 remote play, and you can pick one up for just $120 today, an all-time low. [Open Box PlayStation Vita, $120]

Here are some great unauthorized games you can play on your Sony PS Vita, don’t ask how we got … Read more Read more

If you don’t have a good cooking thermometer in your kitchen, this one has a 4.5 star average on over 3500 reviews, and you can pick one up for just $8. [Chef Remi Cooking Thermometer, $8 with code 8W6BY59J]

1986 purchased by readers•Gawker Media may get a commission
$33.95
Buy Now
Amazon

A 30,000mAh battery pack may seem like overkill, but that could keep your phone running off the grid for over a week, or even every phone in your family during a short camping trip. So, uh, yeah, I guess it might be overkill, but it has its uses! [ZeroLemon ToughJuice 30000mAh Portable Charger, $33 with code UKFFS6JC]

1052 purchased by readers•Gawker Media may get a commission
$129.99
Buy Now
Amazon

828 purchased by readers•Gawker Media may get a commission
$129.99
Buy Now
Amazon

If you’re a fan of fighting games, this specialized PS4/PS3 controller is designed specifically for you. And at $30, it’s never been cheaper. [HORI Fighting Commander 4 Controller for PlayStation 4/3, $30]

396 purchased by readers•Gawker Media may get a commission
$29.97
Buy Now
Amazon

If you’re a Star Trek fan, this $1 Kindle book should be an insta-buy. [The Autobiography of James T. Kirk (Kindle), $1]

We see deals pretty frequently on the low end Apple MacBook, but today, you can save $300 on the most well-equipped model, which includes a faster processor and 512GB SSD. [Apple MacBook 512GB, $1300]

The new MacBook is a marvel of engineering. It’s beautiful, and far more functional than a computer … Read more Read more

Commerce Content is independent of Editorial and Advertising, and if you buy something through our posts, we may get a small share of the sale. Click here to learn more. We want your feedback.Send deal submissions to Deals@Gawker and all other inquiries to Shane@Gawker