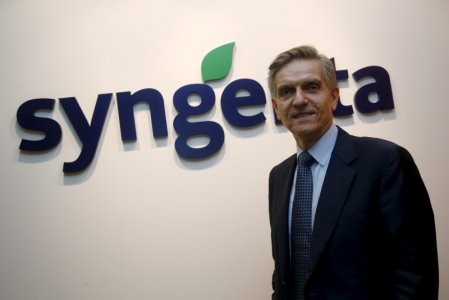 By Rujun Shen and Gavin Maguire

The $43 billion all-cash deal unveiled last week is the largest foreign acquisition ever by a Chinese firm, and marks a massive upgrade to China’s crop production potential.

The deal would also give Swiss-based Syngenta unrivalled access to China’s massive, yet fragmented and underdeveloped, crop market. China is the world’s largest grain producer, and is a major grower of vegetables, oilseeds, cotton and sugar. (For other stories on the deal, please see)

The Basel-based COO of Asia-Pacific and North America, who is on a tour through Asia to address customer concerns about the pending takeover, said Syngenta had been limited in its activities in China as a foreign company but could now leverage ChemChina’s local knowledge to build its share of the multi-billion dollar agrochemical and seeds market.

Syngenta is already the market leader in the fungicides and insecticides industry within China, with a roughly 6 percent share.

“Our crop protection market share in China is significantly below our market share in other parts of the World,” Pisk said on Friday, adding that the company’s average share in Asia is around 12 percent, and nearly 20 percent globally.

The Syngenta executive noted that while cultivation of GM food crops remains illegal in China, there are indications that the government wants to move toward adopting more use of GM technology, but to do so in a very cautious way, as it recognizes a lot of consumer uncertainty and anxiety about the question of GM foods.

“One of the benefits of ChemChina acquiring Syngenta is to hopefully remove some of the suspicion around modern technologies as they relate to agriculture amongst Chinese consumers,” Pisk said, adding that Chinese consumers had been reluctant to accept GM technology as long as it appeared controlled by foreign companies.

If the technology is owned by a Chinese entity, consumers will have more confidence in its safety, he added.

“This will ultimately lead to more rapid user acceptance and greater confidence that this can really contribute to a safer and more secure food supply chain in China,” he said.

“This acquisition clearly is consistent with the stated strategic intent of the Chinese government which is looking to modernize its agriculture within China… I think that with ChemChina’s move here, this will add capability to China’s ability to invest in more sustainable agriculture practices within China.”

ChemChina’s purchase still has to be signed off by global regulators, but Pisk says both companies are confident it will be approved due to the limited overlap of commercial interests.

“The overlaps are quite limited as far as we can judge them, so we think from that perspective the regulatory approval risks are low,” he said.