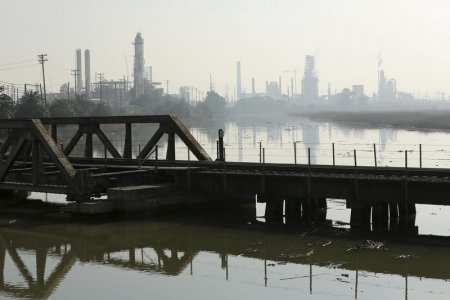 Thomson ReutersA view of the Tesoro refinery in Martinez

HOUSTON (Reuters) – Independent U.S. West Coast refiner Tesoro Corp has agreed to pay $8.08 million to 769 United Steelworkers union members at refineries in California and Washington state who were denied bonuses while on strike in 2015, the U.S. National Labor Relations Board said on Friday.

The bonuses were awarded on March 6, 2015 to non-striking employees for the previous year, according to the NLRB statement. Tesoro withheld the bonuses from the striking workers, contending it was in accordance with an agreement between the union and the company.

Complaints were filed with the NLRB by workers at the company’s Carson, California, and Anacortes, Washington, refineries alleging failure to pay the bonuses was done in retaliation for the strike and an unlawful modification of the agreement, the NLRB said.

“After the NLRB issued complaint in both cases, parties reached this settlement which will provide workers with 100 percent of the bonuses that they were eligible for under their contract,” the board said.

Under the settlement agreement, Tesoro admits no violation of the U.S. National Labor Relations Act, the NLRB said.