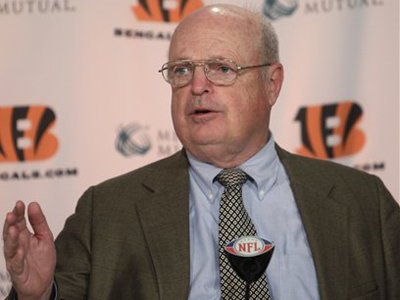 NFL owners in Houston on Tuesday voted 30-2 in favor of the Rams’ bid to relocate to Los Angeles starting next season.

As a result of an anonymous voting system — one that Peter King reports helped Stan Kroenke’s Inglewood bid immensely — it is not known which two owners voted against the Rams’ proposal.

Davis voting against the Inglewood proposal makes sense; he supported his joint proposal with Chargers’ owner Dean Spanos for a stadium in Carson. But why on earth would Brown? Having a team (or two teams) in LA will increase revenue for the league as a whole, and increased revenue is split roughly evenly among the 32 teams. What was Brown’s rationale?

Let’s hear it from Florio:

Brown has a well-documented reputation for refusing to go along with anything that helps the league become bigger and better. His primary concern in those situations is the impact of the new revenue on the salary cap.

If this is true, and Brown sincerely voted against moving the Rams to LA because it would ultimately mean he has to pay his players more, Cincinnati’s playoff drought (they haven’t won a playoff game since 1991!) isn’t ending any time soon.