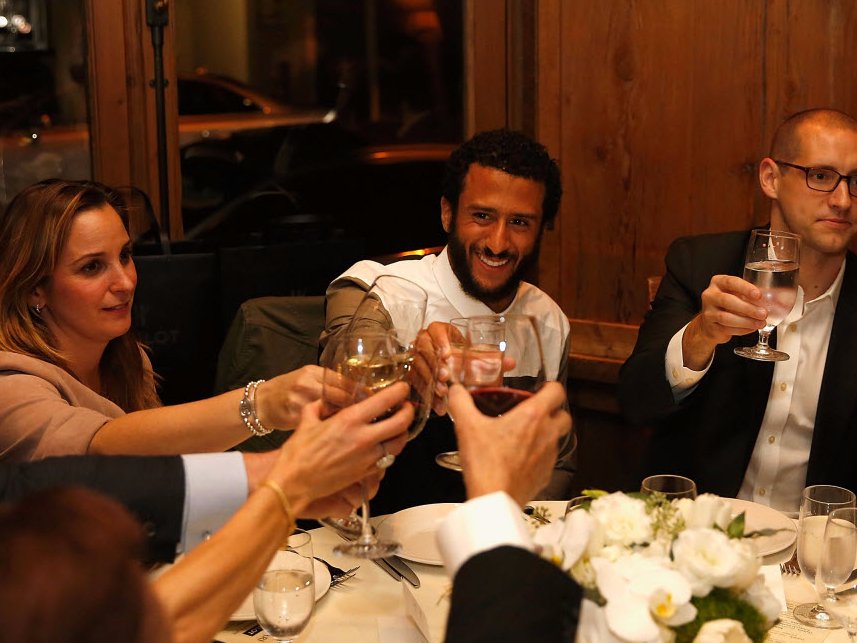 The San Francisco 49ers announced on Thursday that they have hired Chip Kelly to be their head coach. While Kelly is a big name that should get the fans excited, there is probably nobody happier than quarterback Colin Kaepernick.

With the hiring of Kelly, Kaepernick just went from an ugly spot where he had lost his job and was probably going to be cut, to a situation where he is almost certainly going to be the starter again.

More importantly, Kaepernick will now likely get to keep his $126 million contract and get a chance to earn some of the $100.1 million he would have lost if he had been cut.

Kaepernick, who nearly won a Super Bowl in 2012 with the 49ers, would seem ideally suited to run Kelly’s read-option offense and the pair could thrive together now that Kelly has a mobile signal-caller. In fact, Kaepernick is already being called the best quarterback Kelly has had since moving to the NFL, as stated by ESPN’s Bill Barnwell.

Colin Kaepernick is the best pro quarterback Chip Kelly’s gotten to coach by a pretty significant margin, which is saying something.

Add in Kaepernick’s value as a runner and he’s comfortably the best QB Kelly’s had since leaving Oregon.

According to Ian Rapoport, Kelly liked the idea of coaching Kaepernick so much that acquiring him became part of the process in determining where he would coach next.

“As he plotted potential moves & his next NFL stop, Chip Kelly was trying to figure out how to trade for/sign Colin Kaepernick,” Rapoport wrote on Twitter. “No need now.”

According to one source for Cam Inman of the Mercury News, neither the 49ers nor Kelly reached out to him during the coaching search. Prior to the 2014 season, the 49ers raised a lot of eyebrows when they signed their young, supposedly franchise quarterback to what was being called a “record” seven-year, $126 million contract with $61 million guaranteed. But this is the NFL, and to them, “guaranteed” doesn’t mean what it means to the rest of English-speaking world.

Thanks to some fancy wording ($12 million in unlikely bonuses were built into the deal as “de-escalators”), and with most of the $61 million only being guaranteed against injury, the 49ers had a contract that was extremely team friendly and one they could easily get out of at any time.

With Kaepernick being benched mid-season and due to earn $13.4 million next season, with a $15.9 million hit against the salary cap, he appeared to be a prime candidate to be released this offseason. One report called it “virtually certain” that Kaepernick would not be back with the 49ers next season.

At some point the 49ers will still want to re-work Kaepernick’s contract as his cap hits grow, starting at $19.4 million in 2017 and reaching $23.5 million in 2020. But with more than $50 million in available cap space for the 2016 season, including Kaepernick’s deal, he would seem safe for the upcoming season.