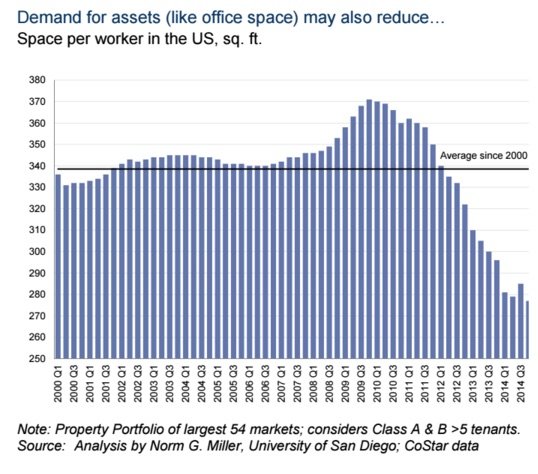 The traditional office is being totally reinvented.

A chart from Goldman Sachs on the average office square feet per worker in the US shows that space has been on the slide since its peak in 2009, falling off a cliff once it crossed below the average since 2000 level in 2012.

Here’s the chart from Goldman’s recent note rounding up its 100 best charts from the year: First, the way we work. The rise of technology like Skype and Slack over the past decade, combined with faster and faster internet speeds, has made working from home a more viable, and increasingly popular, option.

Secondly, changes in property. One of the hottest trends in the market right now is co-working, with office startup WeWork attracting a multi-billion dollar valuation.

Startups like WeWork offer businesses flexible space by the desk, rather than by the square foot. That means growing businesses can simply sign on for more space as they hire more staff, as opposed to taking a lease on a big place and having to grow into it. That increases the efficiency, and therefore reduces the office space per employee.

The bigger picture, though, is that these two trends are eroding the traditional office environment that has dominated corporate life for over half a century.

Rather than the big out of town offices, companies are increasingly spread over several sites, with some employees rubbing shoulders with other businesses in co-working spaces.