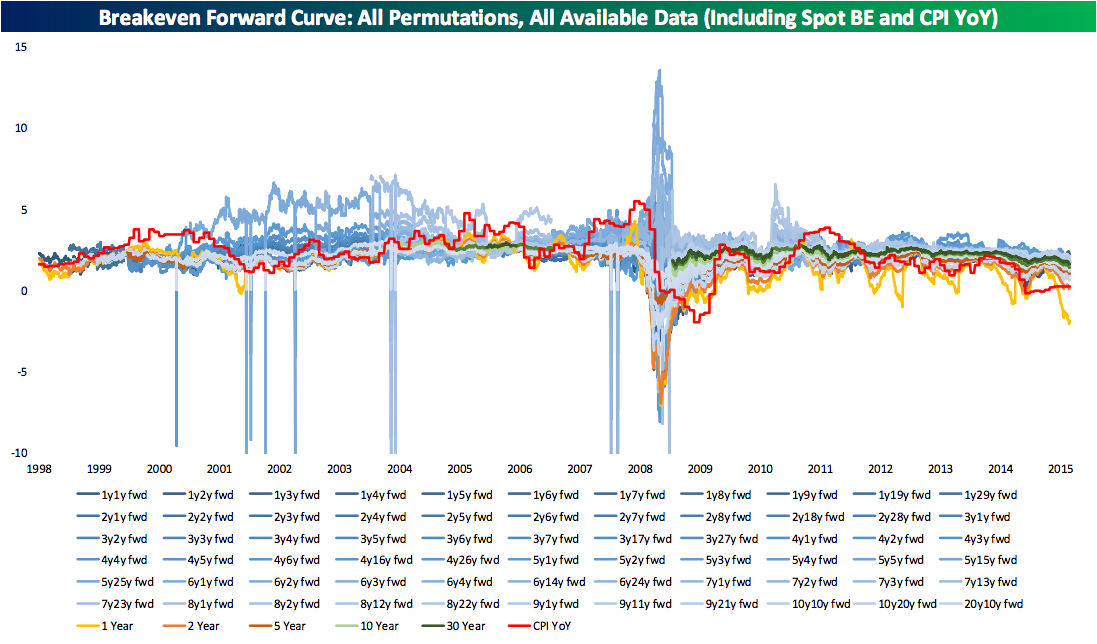 Narayana Kocherlakota is back!

Kocherlakota, the former president of the Minneapolis Fed who was replaced by Neel Kashkari on January 1, tweeted on Wednesday afternoon that the decline in 5-year/5-year breakevens was a worrying signal for the Fed’s credibility.

(Speaking of credibility, Kocherlakota was widely speculated to be the source of the two negative dots that appeared on the “Dot Plot” back in September.)

The 5-year/5-year breakeven inflation rate gives the market’s expectation of what the inflation rate for 5 years ahead will be in 5 years. Or at least, that’s what people think.

And so when the Fed talks about “the decline in market-based measures of inflation expectations” (or something like that) this is usually the figure they’re talking about.

And the decline in this measure is thought to be a market-based call on what inflation rates will be in the future. And given that 5-yr/5-yr’s are now around 1.7%, those inclined to see this measure as a market-based prediction on future inflation, which looks like it will miss the Fed’s 2% target. Hence, as Kocherlakota said, the Fed’s potential loss of credibility.

But as much of the commentariat on Finance Twitter has noted, this ratio is basically meaningless and has been in free-fall of late because oil prices have been collapsing.

Back in September George Pearkes, an active member of Finance Twitter and an analyst at Bespoke Investment Group, inspired a long note that included a ridiculous chart showing the n-year/n-year breakeven inflation rate for every year the firm had access to. As for what this is actually measuring, here’s what Bespoke wrote at the time (all emphasis ours):

We see again, and again, and again references to the “five year five year forward expected inflation rate.” Long-term subscribers will recall our annoyance at the use of this indicator … The reality is that those who view forward rates from the bond market as “expectations” are not measuring what they think they’re measuring.

All interest rates of any term are composed of two factors: the expected path of shorter term interest rates and a risk premium. We can decompose a longer-term interest rate into two components: a known shorter-term interest rate and a “forward” rate. For example, if we know a five year bond yield, and a ten year bond yield, we can know what the arbitrage-free forward yield on a five year bond will be in five years. The arbitrage free yield is a rate that makes an investor indifferent between receiving the ten year rate or the five year rate now and the forward. There’s no guarantee what the five year rate will be in five years, of course, but we know that all three rates (the longer bond, the shorter bond, and the forward) have to move in tandem; otherwise, quick and savvy investors could buy or sell these rates in various combinations and lock in a risk-free profit […]

So what does this rate represent? In a word, nothing. It’s simply the difference between two other interest rates, given their current levels. If either of those rates move, so will the forward rate; but that doesn’t mean it’s a “market expectation.” It’s a formula […]

We see countless prognosticators, analysts, and others with a platform referring to forward bond yields. But it’s rarely done with the proper understanding or caveats of the limits of the arbitrage-free rate. It’s also rarely done with anything approaching an understanding of how sensitive these rates are to the realized inflation over periods they are purported to predict.

And so the story here is that, Kocherlakota, who was basically trolling the Fed from the inside, is now doing it on the outside (he’s taken a post as an economic professor at the University of Rochester).

SEE ALSO:Stocks got crushed on Wednesday

NOW WATCH: NASA scientists are baffled by a mysterious pyramid structure they found in space