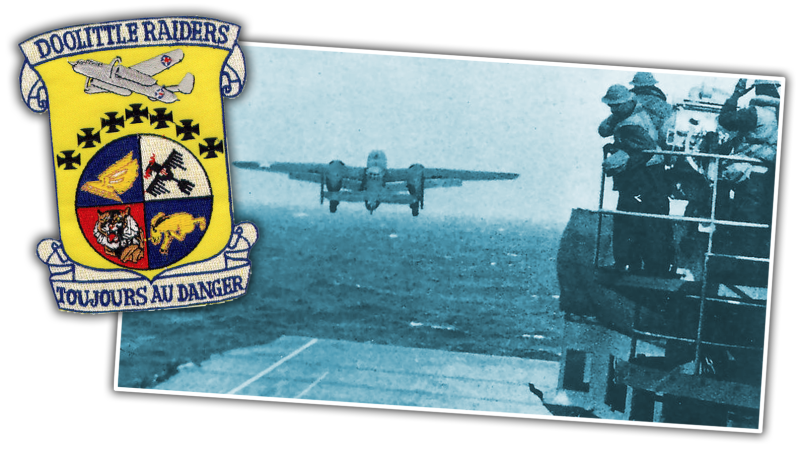 Exactly 75 years ago today, one of the strangest, most daring, and, frankly, craziest missions of World War II was carried out: the Doolittle Raid, America’s retaliation to Japan for Pearl Harbor, and the first time anyone in the war had directly attacked Japan’s Home Islands.

In case you’re not familiar with the Doolittle Raid, the Japanese attack on Pearl Harbor was a huge blow to American public morale, and desperately needed to be answered.

The plan was for a direct American attack on the Japanese Home Islands, which would show that Japan was vulnerable to such an attack. The Japanese people had been told by their government that they were effectively invulnerable. A successful attack would break that myth and cause the Japanese people to start to question their own leaders, while improving American morale immeasurably.

Doing such a raid was not easy. Hell, it was barely even possible at all, given the distances involved. The only way to get bombers close enough to Japan to mount an attack would be to launch them from an aircraft carrier. The problem is that no bombers ever get launched from aircraft carriers.

Eventually, Colonel James Doolittle settled on using sixteen highly modified B-25 Mitchell medium bombers. These bombers were dramatically lightened and modified to carry nearly twice as much fuel. They took off from the aircraft carrier USS Hornet. Up until this point, no bomber had ever taken off from a carrier, because most people believed it couldn’t be done. They had only 467 feet to take off their bombers, laden to the maximum with fuel and 2,000 lbs of bombs, in four 500-lb bombs.

And, again, none of the pilots had ever taken off in a bomber from a carrier before. They all made it.

Eventually, they all got to Japan, and somehow every bomber but one managed to drop their bombs on their target. The mission had a pretty rough ending, and while it didn’t cause a lot of actual physical damage (though what it did do certainly wasn’t trivial), the real victory was psychological.

America’s morale improved dramatically, and Japan’s confidence and morale took a severe hit. The Doolittle Raid set the stage for the Battle of Midway, a major US victory, and, really, helped define how the entire Pacific war would be fought.

There’s so many fascinating details of this story, but I just want to give you six amazing facts:

1. All sixteen bombers crashed at the end of the raid, all but one in China, with one having to ditch in the Soviet Union. Because he lost every plane, Doolittle was convinced he would be court-martialed. He was, of course, welcomed as a hero.

2. Doolittle himself did land in a huge pile of shit.Doolittle’s plane ditched over China, and after a pitch-black parachute fall to the ground, Doolittle landed in a rice paddy, right into a heap of nightsoil: fertilizer made from actual human manure. Some sources say he was up to his waist, others his neck. While both sound nightmarish, it was actually a blessing since Doolittle had bad ankles from a previous injury.

3. To save weight, an advanced, $10,000 Norden Bombsight—really an early analog computer—had to be replaced with something less complex. The result was a bombsight designed by C. Ross Greening called the ‘Mark Twain.’ It cost 20¢ to produce.

4. Another weight-saving measure removed many of the guns from the B-25s. In a desperate effort to still keep some protection at the rear, a pair of fake guns were mounted in the tail of the bombers. They worked; the pilots reported that no plane was attacked from the rear during the raid.

5. Medals of cooperation and friendship given to Americans by the Japanese government prior to the war were returned to Japan during the raid by wiring the medals to one of the 500-lb bombs.

In a report to the Pacific Fleet, this was described as:

The medals were subsequently delivered in small pieces to their donors in Tokyo by Lt. Ted Lawson at about noon, Saturday, April 18, 1942.

6. The crew that had to ditch in the USSR had their bomber confiscated, and the pilots interred because the USSR had a non-aggression pact with Japan at the time. They were well treated, but officially they could not be released.

Eventually, they were able to bribe a smuggler who helped them escape to the British consulate, where they were then returned home. The smuggling, however, was a ruse orchestrated by the Soviet’s KGB predecessor, the NKVD.

There’s so much more to learn about this raid, both good and bad. There were civilian casualties, and the Japanese wreaked a horrific punishment on the Chinese villages that assisted the American crews.

Regardless, it’s one of the pivotal battles of WWII, and absolutely worth remembering on its 75th anniversary.

Volkswagen Finds An American WWII Bomb In Their Factory