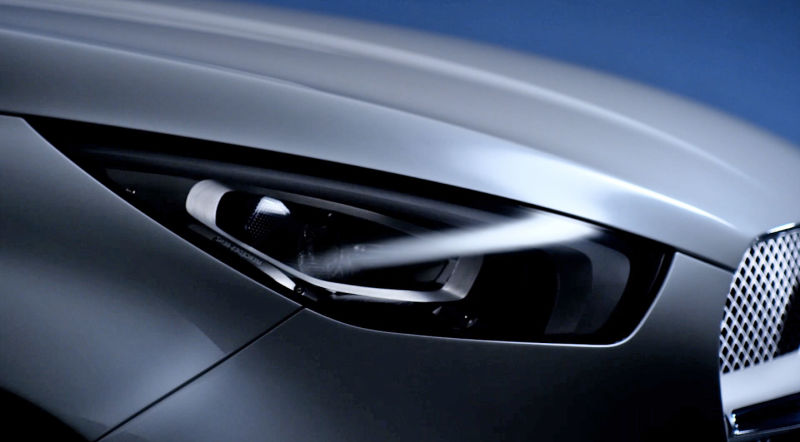 Even knowing the Mercedes-Benz pickup truck is be based off the somewhat-sleek Nissan Navara, I thought the company would line it up aesthetically with the brickish style of its commercial vehicles. Looks like I was very wrong– squint at the right spot and you might mistake this thing for a sports car.

The truck is slated to be officially revealed October 25 in Stockholm, Sweden but Mercedes has preemptively dropped a teaser clip with shadowy quick-cuts giving us a look at a body style that is most definitely not boxy.

If you thought the air-splitter on the Chevy Colorado was “too on-road” for a truck, I expect your monocle to drop straight into your champagne when you get a load of the Mercedes truck’s chin.

In profile, the Benz’s relationship to the Nissan is unmistakable. See for yourself:

But from every other angle, at least up close, the latest Mercedes design we keep assuming will be called “GLT” looks downright sleek.

Wait, hang on, I found the truckiness. Here’s a shot of some corrugated sheet metal for you pickup “purists.” (Hah!)

When the Mercedes-Benz pickup truck concept was first announced, the company claimed it would have a payload capacity of “about a metric ton” (2,200 pounds) which is a little more than the mid-sized trucks we get in America, but about on-par with global market vehicles in this segment.

As far as specifications, that’s all we really know. It’s safe to assume the overall dimensions will be essentially identical to the new Nissan Navara, but a different drivetrain could dramatically vary capability between the two trucks.

Now my gut says it’s not likely that this truck will hit the American market, but it’s not as implausible as you might think. As you may know, one of the greatest barriers to “small” trucks being imported to America is the Chicken Tax that would make them prohibitively expensive.

But Nissan builds the Frontier in the U.S. The Frontier and Navara have always been related. If the Mercedes-Nissan alliance were to allow it, it’s not impossible to imagine American Nissan factories being utilized to produce this vehicle for U.S. customers.

Of course it’s also important to notice that Mercedes uses the word “Concept” in the teaser, indicating that the company’s reserving the right to change the final design or kill it altogether before committing to production. We’ll see some more revealing photographs and presumably more details on October 25th.

Here’s The Mercedes Pickup Truck Prototype In The Wild

Mercedes’ New Pickup Truck Will Be A Nissan Frontier