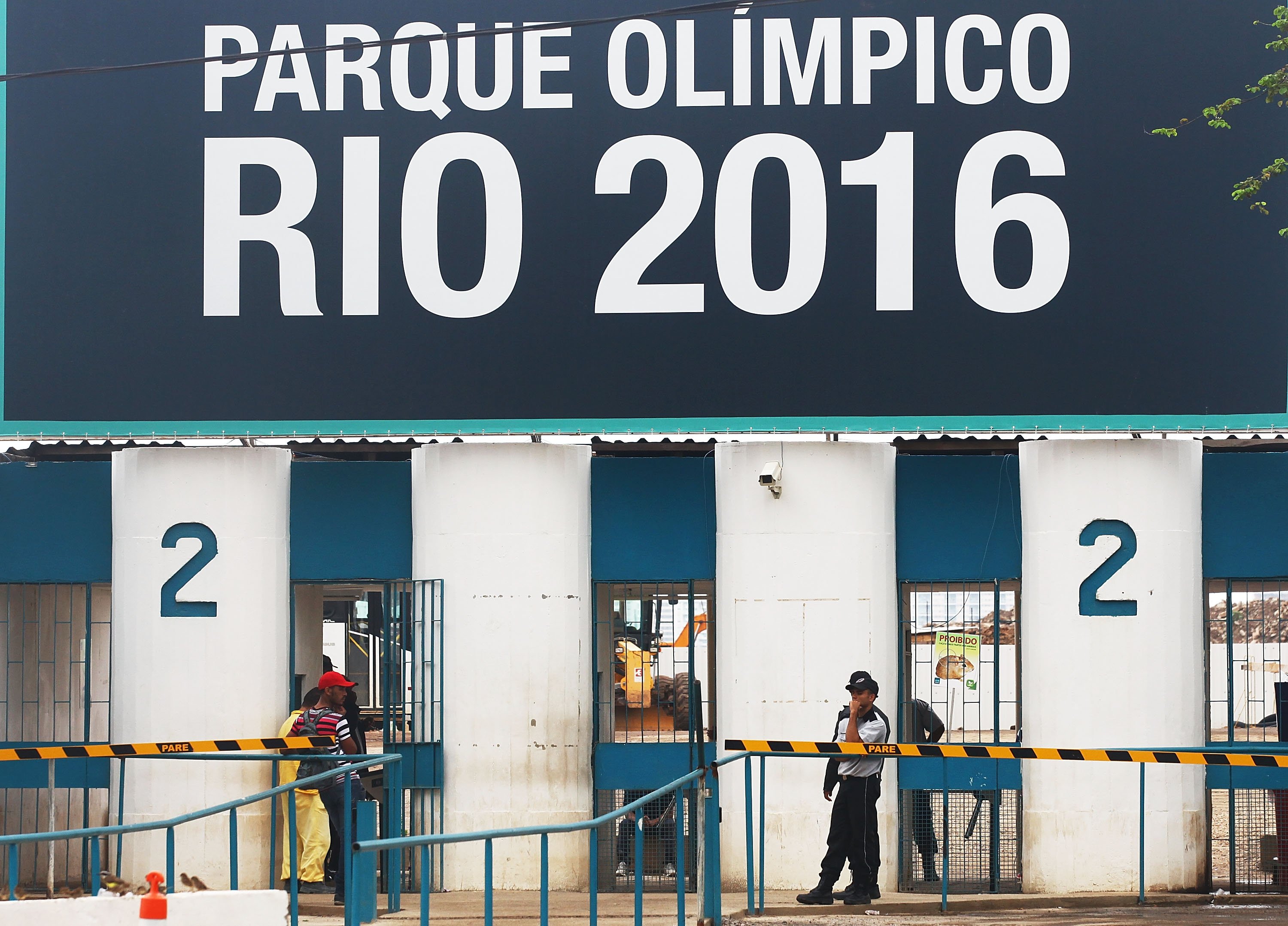 Getty Images/Mario TamaA security guard keeps watch at the entrance to Olympic Park, the primary set of venues being built for the Rio 2016 Olympic Games.

‘We have seen a significant amount of deaths’: Inside Latin America’s brutal war on crime

Brazil’s recent descent into political and economic turmoil has distracted from the country’s struggle to prepare for the 2016 Summer Olympics, and a recent survey of favela residents in Rio de Janeiro indicates that the force trusted to ensure order is part of the problem.

A survey of residents between the ages of 15 and 59 in the northern and southern zones of Rio’s favelas — poor and underdeveloped neighborhoods in and around the city — found that more of them are afraid of the city’s police force than they are of the drug traffickers and illegal militias that operate in and around the city.

In the northern zone, which has a high homicide rate, 59% of respondents said they feared the police, and 58.4% reported being afraid of traffickers.

The difference was greater in the southern zone; just under 53% said they were afraid of the police, while 42% reported being afraid of traffickers.

In the northern zone, 53.3% said they were afraid of militias, while only 43.8% of those in the southern zone said the same.

Given the Rio police force’s track record, those responses are not surprising. In 2015, Rio’s police killed 307 people, accounting for one in five homicides in the city that year, according to Amnesty International.

Throughout Rio de Janeiro state, police killed 580 people in 2014, a 40% jump over the previous year. In 2015, police killings in the state jumped again, to 645 people. Use of excessive force by police in Rio state has surged, Amnesty notes, “and the majority of victims are young black men from favelas and marginalized areas.” REUTERS/Ricardo MoraesResidents react as policemen take position during an operation in the Maré slums complex in Rio de Janeiro, March 26, 2014. Brazil deployed federal troops to Rio to help quell violent crime following attacks by drug traffickers on police posts in three slums on the north side of the city.

Renate Winter, vice president of the UN Committee on the Rights of the Child, said the violence wasn’t new, but that it was most palpable in Rio de Janeiro, as part of an effort to “present a problem-free city to the world,” though Brazilian officials disputed the UN’s findings.

Police violence has increased as authorities have carried out evictions of thousands of families living in Rio. A group of activists in the city say more than 77,000 people were forcibly evicted between 2009 and 2015.

In many cases, government plans to improve infrastructure and services in favelas have been delayed or canceled. REUTERS/Ricardo MoraesSquatters argue with riot policemen as they are evicted from an abandoned building in Flamengo neighborhood, in Rio de Janeiro, April 14, 2015. Riot police removed squatters from a derelict building that was supposed to be turned into a luxury hotel.

The Brazilian government has also launched pacification efforts in Rio’s slums and favelas over the last decade, aimed to preparing the city to host the 2014 World Cup and this year’s Olympics.

As documented by journalist Ioan Grillo in “Gangster Warlords,” those efforts had some success, driving gunmen away and forcing drug dealers off the streets.

But pacification also increased tensions in some areas. Just two months before the 2014 World Cup, people in a favela near Copacobana beach barricaded streets and burned tires to protest the police killing of a popular dancer.

Even if a police presence brings stability, police can’t be everywhere, leaving criminal elements to thrive in some places. And an emphasis on police presence often comes at the expense of other forms of governance in marginalized areas.

“The only part of the state that goes inside these areas is the police. Other parts of the state have to go inside the favelas as well,” Rodrigo Oliveira, the commander of an elite police unit in Rio, told Grillo. “We need investment in education and in health. But it’s not happening.”

Now — two years on from that World Cup and roughly two months from the Olympics — economic conditions suggest Rio’s police and security forces will be less equipped to both prevent and respond to any outbreaks of violence. REUTERS/Ueslei MarcelinoSoldiers of the military-police battalion and their dogs take part in an instructional exercise at Terminal 1 of the Tom Jobim International Airport in Rio de Janeiro, Brazil, May 25, 2016.

In March, Rio announced a 35% cut to its security budget, amounting to some $500 million. The city’s public security chief said at the time the cuts would mean reducing the city’s police presence and maintenance spending, as well as pacification plans for Maré, one of the city’s biggest and most violent favelas, would be put on hold.

“The first impact will be in investment on technology and infrastructure,” Paulo Storani, a former captain in Rio’s Special Operations Police and a professor in Rio, told Vice in March. “Then [the cuts will impact] public security, in terms of visible policing such as cars, and police in the streets.”

SEE ALSO:The president of one of the world’s most Catholic countries just proposed a big change

NOW WATCH: Watch legislators in Brazil scuffle during a vote to impeach their president