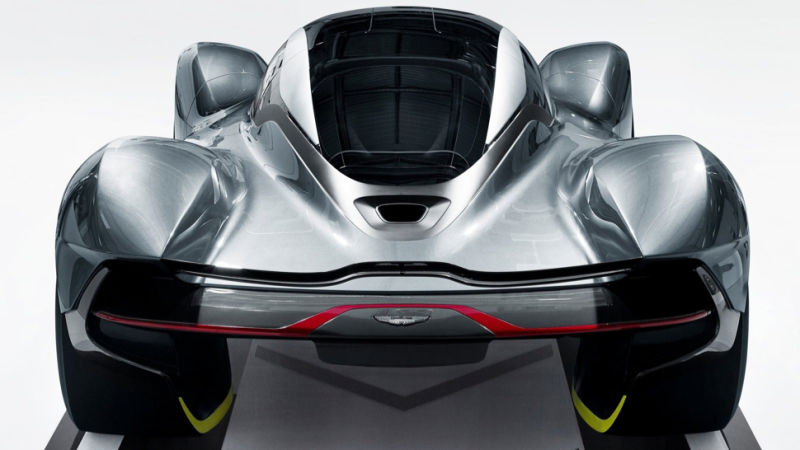 See that massive, gaping cavity up there? The one in the back of the joint Aston Martin-Red Bull Racing joint venture, the AM-RB 001? The place where it’s missing a whole lot of car? Apparently that will help the track version make a mind-melting 4,000 pounds of downforce. Oh, and four g of lateral acceleration at speed, like a Formula One car.

For comparison, the McLaren P1 GTR generates a “mere” 660 kilograms of downforce, or about 1,455 pounds. For the mathematically challenged, that means the track version of the Aston will generate 2.75 times the downforce of the McLaren.

The downforce number on the Aston is still “unofficial,” whatever that means, but it comes from a piece about the sheer engineering force behind the car with the toaster name in the Wall Street Journal. And all that downforce won’t be used to simply stick it to the ceiling like some sort of weird bug, either. It’ll be used to snap necks everywhere:

According to King, the 25 track-only copies of the car will be able to hold the line while cornering at up to four g of lateral acceleration, at which point the average driver’s helmeted head weighs 100 pounds and wants very much to depart its moorings.﻿

Four G’s worth of turning grip is, frankly, absurd. Ridiculous. Patently offensive. Especially for a track car that’s based on a road-legal machine.

It’s essentially the same exact turning force of a F1 car in a high-speed bend, and F1 drivers are absolute monstrous freaks of nature because of it. Here’s F1 driver Fernando Alonso, for example, crushing walnuts with his neck:

They will, most likely, die.

But what a way to go.

Aston Martin Vantage GT12 Roadster: Proof That Aston Will Do What You Want If You’ve Got Cash