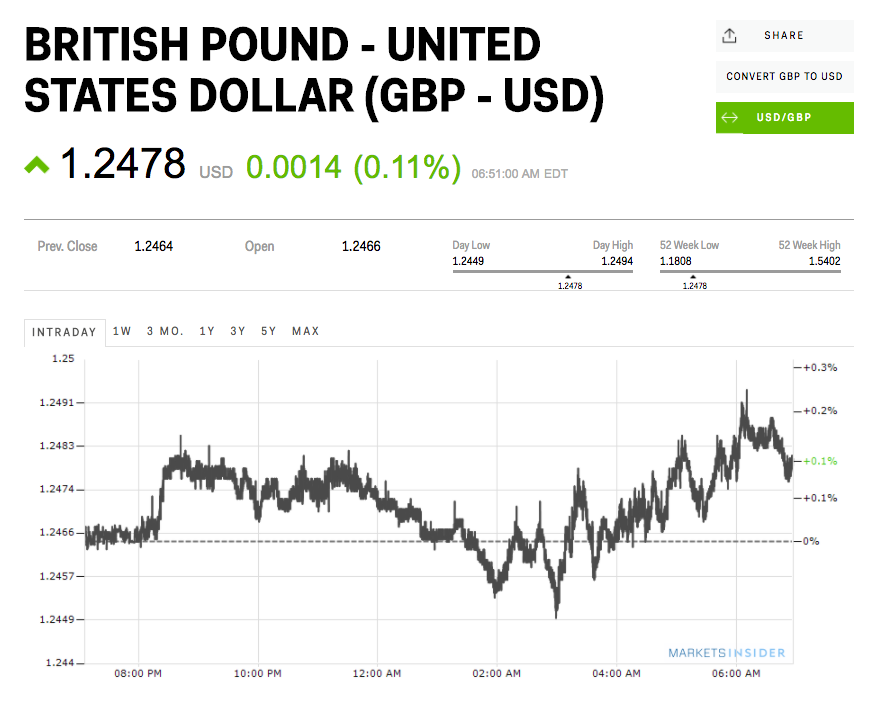 The pound is climbing for a third consecutive day, holding onto the huge gains seen on Thursday after a landmark legal ruling put a spanner in the works for Britain’s exit from the EU.

The pound took off on Thursday after the High Court ruled that the British government cannot begin the formal process to leave the European Union without first having a vote in parliament.

The verdict of the landmark case on the triggering Article 50 was announced just after 10.00 a.m. GMT, and sent the pound soaring, climbing more than 1.2% against the dollar almost instantaneously.

Sterling then gained further ground after the Bank of England left interest rates unchanged at 0.25%at lunchtime in the UK. Commenting on the market moves so far on Friday, Hussein Sayed, the chief market strategist at forex firm FXTM says in an email:

“In foreign exchange news, sterling was the best performing currency yesterday rising more than 1% against the dollar after British High Court ruled that the process of exiting the European Union cannot begin without the parliament’s vote. The news offered some hope that Theresa May will be forced to follow a “soft Brexit path” as most parliament members did not support the decision to leave the EU, it also suggests that article 50 might be evoked after March 2017, the deadline mentioned by Theresa May. If coming news continue to support a softer Brexit, expect the pound to recover further with first target around 1.26.”