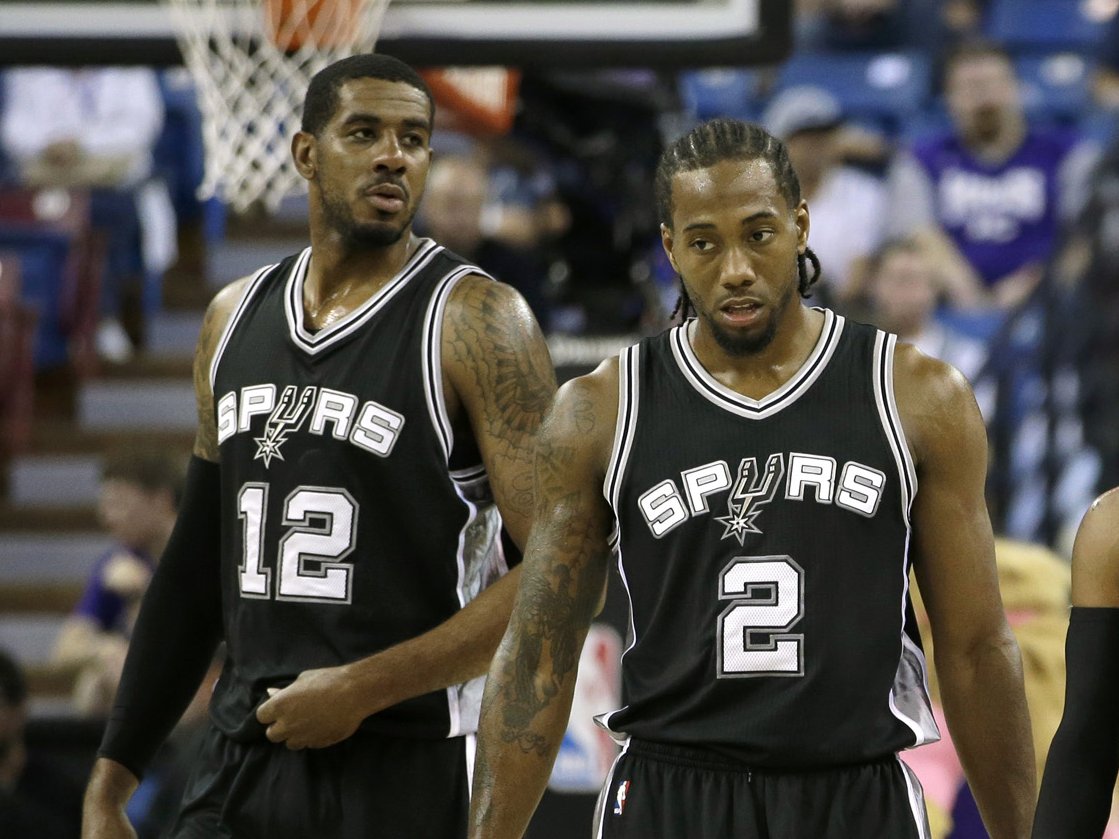 Carmelo Anthony admits Knicks owner James Dolan forced him to apologize for heckling a fan, and it seems the wheels are falling off

If the Golden State Warriors weren’t contending for the greatest record in NBA history, the San Antonio Spurs might be the talk of the league this season.

At 52-9, the Spurs are only 3.5 games behind the Warriors for best record in the league, and they’re on pace for 70 wins.

The Spurs are benefiting from something of a re-tool this past summer, where they shifted towards youth, setting up another long run of dominance. In particular, the Spurs committed big money to Kawhi Leonard and LaMarcus Aldridge this offseason, giving Leonard a five-year, $90 million extension and Aldridge, the summer’s top free agent, a four-year, $80 million deal.

While the Spurs still benefit from the stability of the Big Three — Tim Duncan, Tony Parker, and Manu Ginobili — and their cast of reliable role players, Leonard and Aldridge now run the show. At 24 and 30 years old, respectively, the two stars give the Spurs an advantage they haven’t had in years, and the NBA should be scared.

This advantage revealed itself down the stretch of the Spurs’ come-from-behind, 94-86 win over the Pelicans on Thursday night. With just under six minutes remaining, the Spurs trailed by five. That’s when Leonard and Aldridge took over.

Over the next five minutes and 37 seconds, the two combined for 15 points on their own, while Leonard assisted on a basket, meaning they had a hand in 18 points in less than six minutes. This is an advantage the Spurs haven’t enjoyed as Duncan, Parker, and Ginobili have all aged past their primes. The Spurs haven’t had true go-to scorers, players they could give the ball to and let them make something happen. Instead, they had to rely on their brilliant offense generating looks, forcing every player to excel at making smart passes and hitting open shots.

Here, the Spurs just give the ball to Aldridge on the block and let him go to work:

They let Leonard do the same:

Leonard also came up with a big assist by going one-on-one, drawing the defense, and kicking it out to Patty Mills:

And for the dagger, a Leonard-Aldridge pick-and-roll led to Leonard hitting a three:

Now, the Spurs have two younger stars in Leonard and Aldridge to lean on down the stretch of games. Their explosion vs. the Pelicans shows that Gregg Popovich’s offense can take a backseat to raw talent. Popovich wasn’t calling plays down the stretch against the Pelicans; he simply let his two best scorers go to work.

It’s unknown how much this will mean in the playoffs, particularly if they meet the Warriors, who will cause problems for the Spurs defensively. But at the very least, the Spurs, still the NBA’s best defense, now have a plethora of ways to go get a basket in dire situations. That makes the Spurs scarier than they’ve been in recent years.