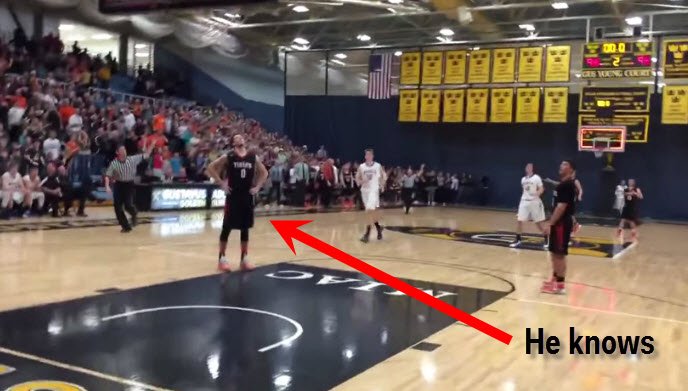 You may never see a crazier game than the one between Waseca and Marshall in Minnesota high-school basketball.

According to KEYC in Mankato, the game went back and forth for most of regulation. The score was 29-27 at the half. Unknown at that point was that the game would enter four overtimes, with three buzzer-beaters, and that the two teams would go on to combine for 177 points after halftime.

All of this, and there was a ticket to the state tournament on the line.

The craziness started at the end of regulation. After Waseca missed a free throw that would have sealed the win, Marshall hit a 3-pointer at the buzzer that barely stayed on the rim and fell in, sending the game to overtime No. 1.

Here is the same shot from what appears to be the student area.

The game tying 3 by Marshall to send it in to OT. Craziest game I’ve ever seen. @mnbuckets@mnbasketballhub#mshslpic.twitter.com/hfBNab2Tnl

But the two teams were just getting started.

Fast-forward to the end of the third overtime. After Marshall scored on a layup and got fouled, it hit the free throw to go up by three with just two seconds to go. Waseca needed to inbound the ball under its own basket and go the full length of the court.

No problem. A nearly full-court shot at the buzzer from Nick Dufault sent the game to a fourth overtime. He had 43 points in the game.

The best part of that replay is the Marshall player standing under the basket. Before the ball even goes through the basket he seems to know it is going in. You would think they won the state championship. In reality the game is still not over. One more overtime to go.

With the game tied at the end of the fourth overtime, we’ve got one more buzzer-beater, because of course we do.

Waseca moved the ball up to the top of the key, and with the chill of a Stephen Curry, Cole Streich pulled up and drained the winning 3-pointer.

Waseca buzzer beater to win in the 5th OT. 3 buzzer beaters got us here. @SportsCenter@mnbasketballhub@mnbucketspic.twitter.com/TZkJLj9lnP

With the win, Waseca earned a berth in the state tournament.