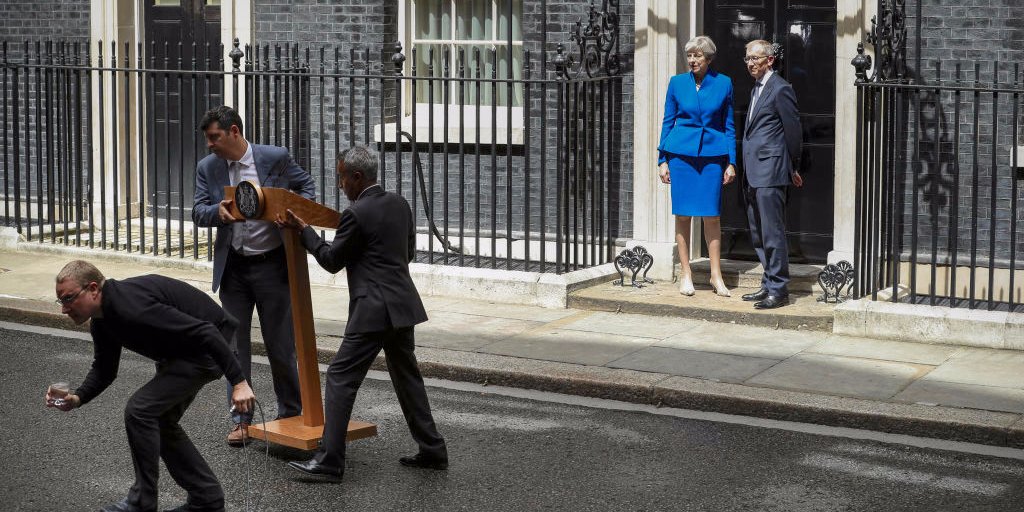 LONDON — Theresa May will tell her MPs that she plans to ditch several key planks of her manifesto, as she struggles to cling onto power today.

The prime minister is due for a showdown with her MPs on Monday afternoon for the first time after failing to win a majority in last week’s general election.

She is expected to say that core elements of the Conservative Party manifesto will be ditched in order to win a majority for her Queen’s Speech in parliament next week.

Policies now in doubt include the commitment for a wave of new grammar schools as well as the government’s controversial social care plans.

May will also face pressure from Remain-supporting Tory MPs to water down the government’s commitment to a hard Brexit outside of the Single Market and the Customs Union.

Speaking in advance of the meeting, her Brexit secretary David Davis said the government had to accept they had failed to win a mandate for their full agenda.

“We tried and failed [to win a majority],” he told the Today programme.

“We’re being given an instruction by the British public and we have to carry it out. That may mean some elements of the manifesto will be pruned away.”

“The public gave a decision. We have to respect that decision.”

The government will now face pressure to move away from its hardline position on Brexit, as they look to make a deal with the Democratic Unionist Party. The DUP are in favour of remaining in the Customs Union in order to avoid a ‘hard border’ between Northern Ireland and the Republic of Ireland.

However, Davis threw doubt on calls from Tory MPs and several Cabinet members to opt for a softer Brexit, saying that the public had rejected those parties calling for Britain to stay in the EU. Both the Liberal Democrats and the SNP saw their vote share decline in this election.

The foreign secretary Boris Johnson also rejected calls for a softer line on Brexit. Johnson said there should be no attempts to oust May as prime minister, but also indicated that there must be “no backsliding” on Brexit.

“There can be no backsliding from the objectives the PM set out in the campaign- taking back control of our laws, our borders, our cash; but also ensuring that we have a great new partnership with the EU that allows us to trade more freely and enthusiastically than ever,” he wrote in the Sun.

Gove back in reshuffle May completed a limited cabinet reshuffle on Sunday. The prime minister had been expected to sack several key members of the government after winning the election, including Johnson, but now lacks the authority to do so.

The PM only made minor changes to her top team with the big exception being the return of the prominent Leave campaigner Michael Gove, as her new Environment Secretary.

“It is hard to think of many politicians as ill-equipped for the role of Environment Secretary as Michael Gove,” Green Party co-leader Caroline Lucas said.

“His record of voting against measures to halt climate change and his attempt to wipe the subject from our children’s curriculum show him entirely unfit to lead our country in tackling one of the greatest threats we face.

“And as we enter Brexit negotiations, Gove’s past suggestion we scrap vital EU environmental protections becomes ever more concerning.

“This appointment is further evidence of both Theresa May’s complete disregard for the environment and her desperation to hold together a government in chaos.”