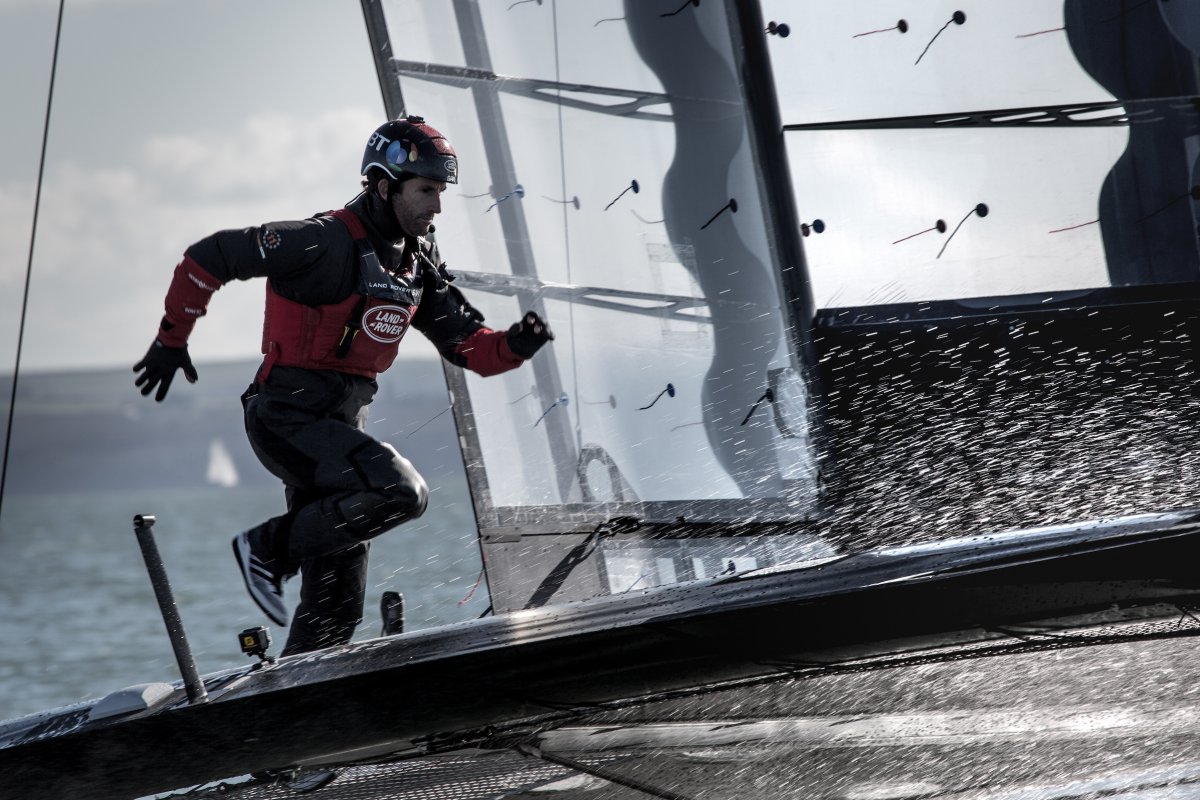 Land Rover BARTeam principal and skipper Sir Ben Ainslie in motion aboard his team’s current boat, the T2. Because of the very high speeds at which the boats maneuver, crew must wear helmets and survival gear.

Calling their sport “F1 on water,” Land Rover Ben Ainslie Racing, the Great Britain-based challenger for the 2017 America’s Cup, is developing their boat for next year’s cup races, called the R1.

Leading the effort by Land Rover BAR is team principal and skipper Sir Ben Ainslie, who in 2013 helped Oracle Team USA pull off a stunning come-from-behind victory after falling behind New Zealand by seven races. With a single loss ending it all, Oracle won eight in a row, a feat The Wall Street Journal called “one of the greatest comebacks in sports history.“ Land Rover BARThe rigid “sail” of the T2, on which team Land Rover BAR has been training, is the size of the wing of a 737 airliner.

Details of Land Rover BAR’s cutting-edge craft are very secretive, but what is known is the immense size of the boat.

Boats during the 2013 races demonstrated speed of more than 2.5 times that of the actual wind, and they will likely be no slower this time around.

They accomplish this feat with a technique called foiling, which makes use of wing-like blades to lift the entire craft out of the water and appear to fly.

The 2017 race will take place in Bermuda. Competitors will sail 45-foot t0 50-foot long catamarans, which are smaller than the AC72 yachts used during the previous cup and part of an effort to curb the massive expense of the event.

The America’s Cup, named for the first yacht to win the event, is the most prestigious race in the sailing world.

The “Auld Cup” has been contested since 1851, making it the oldest international sporting trophy in history.

It has long been the obsession of captains of industry like Sir Thomas Lipton (of Lipton Tea fame), Ted Turner (CNN, TBS), and, most recently, Oracle founder and CEO Larry Ellison.

This year the New York harbor will host a lead in race for the Louis Vuitton America’s Cup World Series May 7-8. The next race in the series takes place this weekend in Oman.