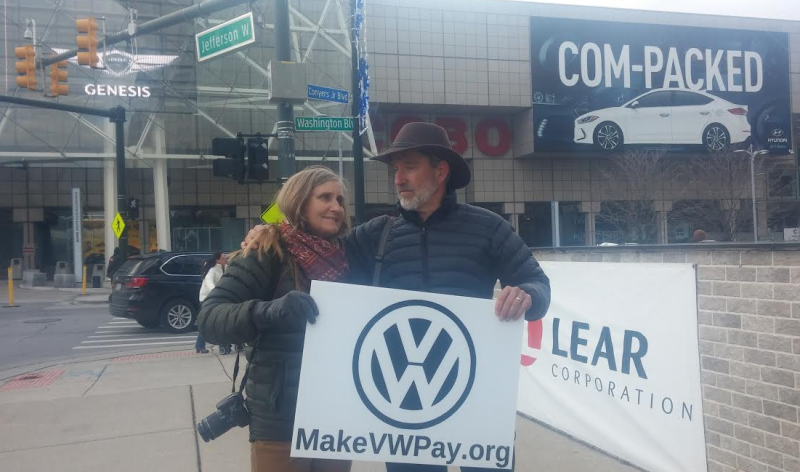 Upset that Volkswagen deceived them into buying a not-so-clean diesel, Marcus Moench and Elisabeth Caspari are driving from Colorado to VW’s headquarters in Virginia to return their Jetta SportWagen TDI and drop off 20,000 petitions. I spoke with them about their journey. Here’s what they had to say.

As car enthusiasts, it might be tempting for us Jalops to think “Make VW Pay” activists are being a bit dramatic. After all, VW TDIs are great cars that get solid fuel economy and are actually decent to drive. Not to mention, compared to vehicles from just a few decades ago, these diesels really aren’t that dirty. So enjoy your good fuel economy and get over it, right?

No. Not at all right.

During their stop at the Detroit Auto Show, Elisabeth Caspari and Marcus Moench spoke with me about their journey to Volkswagen headquarters, and it only took me a second to understand their outrage.

You see, Moench and Caspari are activists who really care about the environment. They founded their own organization whose projects deal with water management, air pollution and climate change among many other health-related issues. So the environment isn’t just something they think about every now and then, it’s what they’ve devoted their lives to protecting.

Naturally, when it came time to find a car, the activists made it their mission to find something that offered low emissions and good fuel economy. What they wound up with was a 2010 Volkswagen Jetta SportWagen. Purchasing a car marketed as a “clean diesel,” Moench and Caspari felt they were getting into an environmentally responsible car that meshed well with their lifestyle and, more importantly, their principles.

Not to mention, Ms. Caspari admitted, the Jetta is actually a nice car to drive.

But when news of the Dieselgate defeat device became public, the road-tripping duo felt cheated. They had purchased a car that didn’t perform as promised and directly opposed their core values. The primary feature that had drawn them to the car in the first place was a sham. And that, the couple said, was true deception and a “moral outrage.”

Shortly after they heard about Dieselgate, Moench and Caspari drove to their local Volkswagen dealership and asked for a refund. The way they figured: if VW stands by their product, they should replace it. After all, the car shouldn’t be on the road and it doesn’t perform as promised. But the dealership could only offer the two VW owners a “goodwill package”: basically just $500 and deal on a new car. Moench and Caspari felt insulted.

But Caspari and Moench realized that the dealers were caught in the middle. They were stuck with a giant inventory they couldn’t sell. If anything, they were in worse shape than anyone. So the duo teamed up with USPIRG’s “Make VW Pay” campaign and decided to drive their Jetta SportWagen from Boulder, Colorado back to Volkswagen’s headquarters in Herndon, Virginia to demand that Volkswagen take their car back and make amends.

On their way to Virginia, the two activists stopped by the Detroit auto show to drop off a USPIRG petition with 20,000 signatures at VW’s booth. The petition urges for the following:

Use VW’s Skills To Innovate

While USPIRG’s petition calls for some pretty harsh punishments for VW, I found Ms. Caspari and Mr. Moench to be rather reasonable individuals.

I walked down Larned Street near the Cobo Center with Ms. Caspari, and she told me how she really wants Volkswagen to react to her campaign. She said she was very surprised and impressed with Volkswagen’s current steps towards electrification. “Did you know they make an electric Golf? I didn’t know that,” she said.

But Ms. Caspari wants VW to go further. She says she doesn’t want VW to go under; what she’d really like is for Volkswagen to use its skills to innovate and become a leader in electrification.

Building more cars like the e-Golf and the H-Tron concept, Ms. Caspari thinks, is a good way for Volkswagen to make up for their transgressions.

While I drive old, junky polluting cars, Caspari and Moench really helped me understand why so many VW owners are outraged about this whole issue. It’s not just a question of resale value or what others will think of them if they drive a TDI, it’s about people who bought cars because the they promised environmental consciousness. It’s about people who later found that the very aspect they cherished so deeply about their car — the one that agreed with their values and beliefs — was a total lie.

Early next week, the couple will arrive at Volkswagen’s HQ in Herndon to drop of another copy of the petition as well as their white 2010 Volkswagen SportWagen TDI. They don’t expect VW to give them a wad of cash right away, but they do expect to be compensated at some point down the road.

So that brings us to a question for our readers: Do you understand Caspari and Moench’s outrage? Do you think asking for a buy-back and calling for leadership in electrification are reasonable requests?