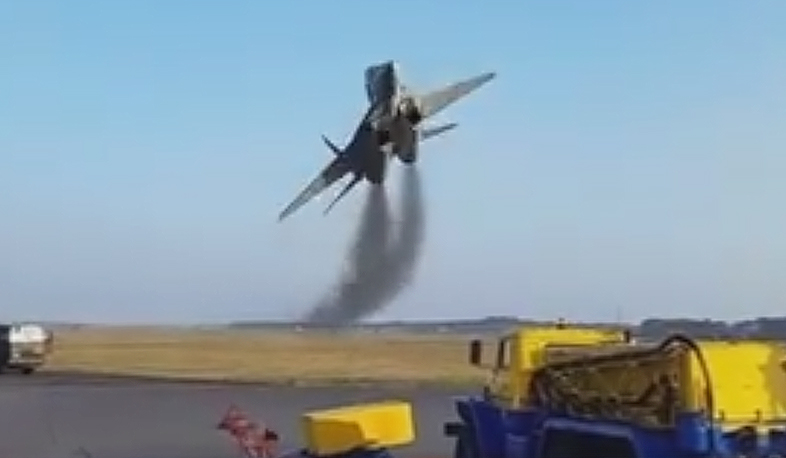 Poland loves to show off its soviet-era MiG-29 Fulcrum fleet, and this extremely low-level flyby is just wild. The hurtling Fulcrum, with its signature RD33 engine-smoke trails tracing its flight-path, disappears seemingly just as fast as it appeared.

Poland’s MiG-29 are some of the most charismatic fighters in Europe. ‘Fulcrum… Read more Read more

Poland operates a fleet of 32 MiG-29A which have received upgrades in recent years that make them NATO compliant and tactically relevant. These enhancements have included changing some of their analogue cockpit instruments to digital ones, installing an upgraded mission computer, new INS/GPS navigation systems, new radios, a NATO-compliant IFF system, as well as adding multi-function cockpit displays and improvements to the jet’s heads-up display. These upgraded jets also feature a digital data bus that will allow new upgrades and munitions to be integrated with relative ease in the future.

It look like something Doc Brown would be working on in his garage, but it is absolutely one of the … Read more Read more

Just last year it was also announced that SAAB will also be upgrading Poland’s MiG-29s even further, installing an advanced electronic warfare system which will greatly enhance situational awareness and survivability for its pilots.

It was thought that Poland would have retired its second-hand MiG-29 fleet (originating from Germany and the Czech Republic) some years ago but with these upgrades the MiGs should be able to remain in service till 2028 and even beyond. There have been issues with spare parts supplies since the chilling of relations between Russia and NATO, but this has been offset to some degree by sourcing parts through Ukraine.

Lt. Col. Fred “Spanky” Clifton is one of the most experienced aggressor pilots ever,… Read more Read more

In recent years Polish MiG-29s have been successful in the air-sovereignty and defense role, serving regularly for the Baltic air-policing mission. They are also seen as a particularly suitable companion to Poland’s 48 jet strong Block 52+ F-16C/D force that has taken on many of the country’s front-line roles.

Šiauliai Air Base is the heart of NATO’s air policing mission over the Baltics. Every six… Read more Read more